To Make Your Organization Resilient, Think Like a Family Business

The ups and downs of economic cycles take most companies for dangerous roller-coaster rides, but family firms weather crises much better than their competitors. That's because they focus on resilience rather than on immediate performance. At a time when the global economy seems to experience crisis after crisis, lessons can be drawn from family firms, or non-family ones that behave (and survive) like them. 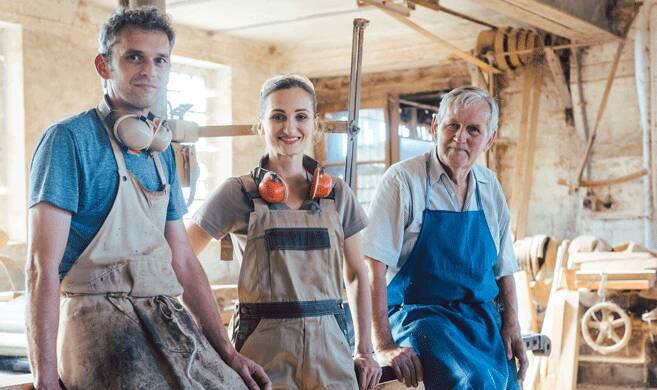 The average life expectancy of a company does not exceed 40 years, according to several international studies. Yet some manage to clock 100 years or more, like Brink's, Michelin and General Electric, which all survived the wars, economic turmoils and crises of the 20th century, and have entered the 21st century full steam ahead. What is the secret to their exceptional longevity, or to use a word that has become particularly popular in management circles, their resilience?

Finding out how companies weather storms is all the more relevant nowadays as periods of fair weather seem shorter and shorter, with one crisis following the other nearly back-to-back. Furthermore, beyond the question of mere corporate survival lies an important issue: When an organization aims for resilience, by definition, it is more respectful of the stakeholders overall, for instance more respectful of its employees - who after all are the crew that will take the organization through the storm-, more respectful of its suppliers and this respectful behavior is oriented toward the long term. So how do companies successfully gear their strategy for the long term?

The answer lies in a set of characteristics that we identified by examining family businesses. Although the term “family business” conjures images of mom-and-pop shops, family-controlled groups may be huge, like Walmart. We compared 149 publicly traded, family-controlled businesses with revenues of more than 1 billion dollars based in Western Europe and North America and a similar group of non-family-controlled companies. While family-controlled groups earn less than their peers during economic booms, they outperform them during economic slumps. Also, when looking across business cycles from 1997 to 2009, we found that their average long-term financial performance was higher.

Our conclusion was that family businesses focus on resilience more than performance.

Our conclusion was that family businesses focus on resilience more than performance. What they do is that they forgo the excess returns available during good times in order to increase their chances of survival during bad times. At a later stage, we carried out additional research with interviews with executives from 19 European firms or European subsidiaries of US firms that were more than a century old and found that they made similar strategic choices. This confirms that well-run family businesses can serve as models, even for companies with different ownership structures.

Here are the strategic choices that we identified as fostering resilience.

1/ Frugality
A quick definition of frugality would be “to spend well”. When managers have a sense that the company's money is the family's money (whether this is strictly true or not), they quite simply do a better job of keeping their expenses under control. They splash less on swanky headquarter offices than their peers, for instance, and keep the bar high for capital expenditures, only investing in very strong projects. One owner-CEO told us: “We do not spend more than we earn”. Prudent rules may mean missing out on opportunities during periods of expansion, but this also limits their exposure in times of crisis.

The same caution applies regarding debt and acquisitions. Family-controlled firms are less leveraged (debt accounted for 37% of their capital on average versus 47% for non-family firms) and make fewer, smaller acquisitions (worth 2% of their revenues vs 3.7% for non-family). Instead, family businesses prefer organic growth and will often pursue partnerships or joint ventures instead of acquisitions.

2/ Reliability
Long-lasting firms are very similar to what has been called “high-reliability organizations” in the academic and scientific literature, usually in contexts of high risks (such as a nuclear power plant). They ensure that their processes are reliable and will resist shocks. For instance, at Spie, a construction group, there is a strong focus on training in work safety, which has helped keep the accident rate at half the usual level in the sector. Incidentally, reliability helps reduce costs, in turn supporting frugality.

3/ Ambidexterity
Resilient companies combine operation and exploration, the need to attend to the present by exploiting the existing capabilities and to prepare the future by exploring new opportunities. One example of an ambidextrous company is Saint-Gobain, which operates in the sector of construction materials. Its research branch has full latitude to set its own goals, but is firmly anchored in the company's strategic markets to help make innovations commercially viable.

4/ Value placed on human resources
Family businesses (and those that emulate them) are better at retaining talent than their competitors. How? Not necessarily through financial incentives, but by avoiding layoffs during downturns, which contributes to stronger employee engagement and helps them keep skills and expertise. They also invest significantly more in training, spending on average €885 per year per employee on average versus €336 at non-family firms.

Leadership also is more stable, with executives at century-old firms displaying 20 years' seniority (pretty classic longevity in family firms), while most CEOs at Fortune 500 companies tend to only have been around the company 8 years before taking the helm.

What is most interesting about the main principles that resilient companies follow is that they are coherent and synergistic, each principle reinforcing the other. For example, frugality and low debt reduce the need for layoffs, which improves retention; fewer acquisitions mean less debt; money saved through frugality is available to be invested wisely and so on. This virtuous circle is likely one that other companies will want to adopt these principles to become more resilient and weather the frequent crises of our global economy.

Listen to the interview in French on Xerfi Canal:

Alain Bloch is Scientific Director of HEC Entrepreneurs MSc. His own experience as an entrepreneur has led him to focus his research on innovation...