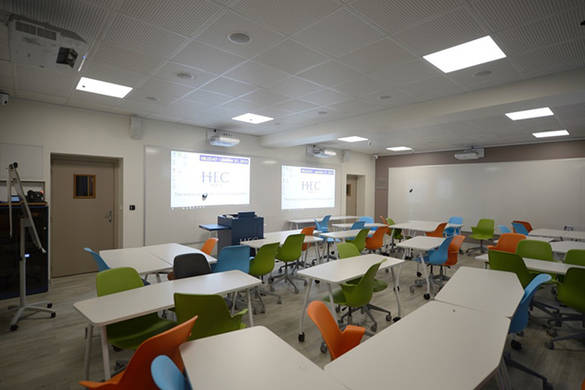 Sébastien is an entrepreneur, investor and philanthropist and created, in 2013, the Breteau Foundation which aims to promote digital education for children in developing countries. Sébastien has been a supporter of the HEC Foundation for many years, and he is an Honorary Member of the Big Donor Circle.

Thanks to this support, the classroom T32 has been equipped with innovative solutions and meets the new educational uses: group work, video recording of classes, interaction with a remote classroom, video calls with academics worldwide...

This classroom supports both traditional and modern teaching styles, thanks to the installation of the following equipment:

• Furniture casters allowing for a number of different layouts (e.g. small groups of 4 to 6 students or a classic arrangement)
• 4 video projectors, each with an independent display (e.g. the teacher’s computer screen on the main projector, live footage from a remote location on the second, and a student’s tablet on the third…)
• A short-throw video projector, to avoid shadows on the whiteboard (all renovated classrooms have this feature)
• A T.V. screen allowing professors to see their presentation whilst facing their audience (all renovated classrooms have this feature)
• An interactive white board (all renovated classrooms have this feature)
• Each projector can be paired with a range of devices: the classroom PC, a professor’s laptop, or a wireless device such as a tablet
• A sound system with ceiling speakers to ensure better sound quality and greater comfort for students
• Smart microphones that detect who is speaking, even when a student is asking a question
• 2 cameras for filming classes. The footage can be watched at a later date or on a live broadcast (via web conference)
• For advanced features, these devices can all be controlled via a tablet.

A number of demonstrations will take place at the beginning of March so that the staff can experience these innovations first-hand, assisted by the IT services.