Trust in Scientists Key to Compliance with Pandemic Policies

As the world faces a new COVID-19 variant and infections rise in many parts of the globe, adherence to pandemic restrictions and vaccination policies — considered by scientists to be essential to controlling the pandemic — has been uneven, sometimes openly hostile. A new study sheds light on key factors to instilling citizen trust and compliance with public health measures. 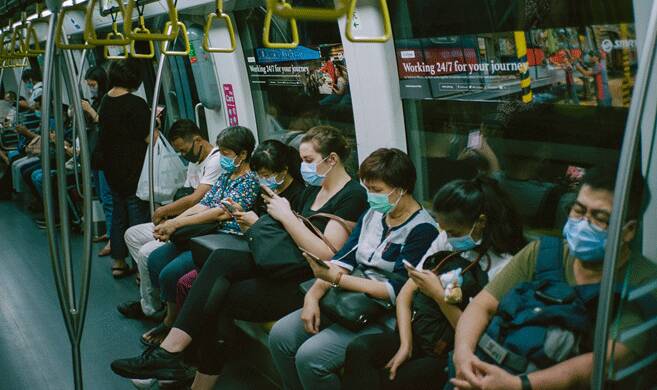 Photo by @shawnanggg on Unsplash

Tens of thousands of protesters have been converging on Brussels to protest anti-COVID measures, with some throwing fireworks at police, the BBC reported in November. Police responded with tear gas and water cannons. Similarly, the Netherlands witnessed riots in several towns and cities; tens of thousands of protesters marched on Vienna to protest lockdowns and mandatory vaccination. Croatia, Italy and Guadeloupe have also experienced unrest because of pandemic measures.

From the beginning of the health crisis, my coauthors and I considered it vital to get a better understanding of how the issue of trust impacts support for pandemic health measures. Over the course of the pandemic, support for nonpharmaceutical interventions (such as closing schools and nonessential businesses, imposing curfews and lockdowns, and making masks mandatory in public spaces) and compliant behavior changed substantially over time.

Many studies have linked compliance with trust in governments or trust in others. Surprisingly, however, we found in a recent analysis that trust in scientists was the main driver for public attitudes in this context. We conclude therefore that the perceived independence of scientists and the transparency of health decisions is of vital importance.

Not merely a health crisis but a social crisis

As we state in the research cited below and in our contribution to a research article recently published in The Lancet Global Health, carrying out an effective strategy to eliminate the coronavirus must address the public’s trust in scientists.

The COVID-19 crisis has not been just a health crisis, but a social crisis as well, with social, economic, legal, political and religious implications. It requires a high level of cooperation between citizens, governments and experts.

Using a large-scale, longitudinal and representative survey in 12 countries from March to December 2020, combined with experimental data, we demonstrated that trust levels, and in particular trust in scientists, have changed dramatically for individuals and within countries.

Countries and individuals for whom trust in scientists declined during the crisis, such as France, experienced a dramatic erosion of support for and compliance with nonpharmaceutical interventions (NPIs).

Countries and individuals for whom trust in scientists declined during the crisis, such as France, experienced a dramatic erosion of support for and compliance with nonpharmaceutical interventions (NPIs) during the crisis. We found that distrust in scientists emerged in countries where the level of trust in government was very low at the initial stage of the pandemic.

Moreover, the countries with the highest levels of scientific literacy, as measured by science scores on the OECD PISA tests, were those where confidence in scientists held up best. Those with comparatively low scores, such as France, showed marked deterioration.

Trust in scientists correlates with support for pandemic measures

Generally, across countries, the share of citizens who trust scientists is strongly correlated with the share of citizens who support NPIs or vaccination. In December 2020, there were stark cross-country differences in people’s willingness to be vaccinated – ranging from approximately 70 percent in the UK, Australia and Brazil to about 60 percent in the USA, Sweden and New Zealand, and to only 36 percent in France and Poland. These variations closely corresponded with the level of trust in scientists.

Finally, the evolution of trust in scientists lay in their perceived level of independence. Typically, in countries where trust in scientists decreased the most, such as Brazil, Italy, France and Poland, a substantial and increasing share of citizens think that scientists are likely to hide information. This pattern emerged precisely in countries where the initial level of trust in government at the time of the outbreak was very low.

One critical implication of this analysis is that if the public perceives there is a too-close association between government and scientific bodies, the result is much lower trust in scientific institutions. Elimination of the coronavirus requires difficult measures – temporary but strict and coercive policies affecting people’s behavior and liberties. Therefore the demonstrable independence of scientists and scientific institutions, through the transparency of processes and the use of multiple sources of information, is essential to obtain citizens’ trust and support for measures necessary to protect public health.

Across countries, the share of citizens who trust scientists strongly correlates with the share of citizens who support pandemic restrictions or are willing to be vaccinated. In turn, the countries with the highest levels of scientific literacy, as measured by science scores on the OECD PISA tests, were those where confidence in scientists held up best. Therefore, the need for countries to increase scientific culture, when it is lacking, is imperative. Additionally, when citizens associate scientists and scientific bodies with government action and political decision making, they have low levels of trust in these scientific institutions. It is thus crucial to guarantee confidence in scientists by preserving (and demonstrating) the independence of scientific bodies, especially in countries with low trust in government.

We analyzed international panel data from the period March to December 2020 for the effect that trust in scientists, government and in others had on support for or compliance with nonpharmaceutical interventions and vaccination. The surveys took place in four waves (March, April, June and December) in 12 countries (Australia, Austria, Brazil, Canada, France, Germany, Italy, New Zealand, Poland, Sweden, the UK and the US).
Based on an interview with Yann Algan and his article “Trust in Scientists in Times of Pandemic: Panel Evidence From 12 Countries” (PNAS, October 5, 2021), co-written with Daniel Cohen, Eva Davoine, Martial Foucault and Stefanie Stantcheva.
Related topics:
Economics
Download & Print
Share
FACEBOOK
TWITTER
LINKEDIN
EMAIL

Yann Algan has joined HEC as the Associate Dean of Pre-experience Programs and Professor of Economics, following six years as the Dean of the School...