When your CV doesn’t interfere with strategic job hopping

Having worked for a prestigious company in the past tends to help in landing another good position. But job-seekers without a stellar CV should not underestimate their chances. A new study of job-matching in the MBA labor market shows that candidates lacking prior employer status can still be successful, depending on the competitiveness of the job. 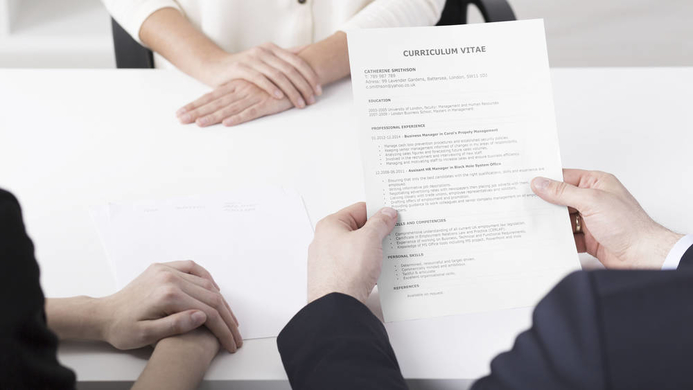 Hiring is a bit of a gamble. After all, an employer doesn't know the candidates – unless hiring internally – and it's difficult to gauge the intrinsic quality of applicants simply based on interviews. One way of hedging bets is to look at the applicants' employment history. Indeed, recent research on mobility suggests that professionals having worked for a high-status employer fare better in the labor market than those from lower-status employers. But how exactly does the status of prior affiliations factor into the matching process between companies and candidates? In a forthcoming paper, HEC professor Roxana Barbulescu and co-writer Rocio Bonnet from Madrid's IE Business School shed light on the question by focusing on the degree of competitiveness of a given job type and its effect on both candidate and employer strategies.

When HR departments have little information about a potential recruit aside from a CV and maybe a reference letter, they look at employment history. Past work at a prestigious company sends a positive signal. “It is a guarantee that the person knows what they are doing, since they were selected before,” says Roxana Barbulescu. She adds that it's all the more important for managerial or knowledge positions, for which past performance is harder to quantify. “It's harder to quantify how you led a team or innovated a product than how you built so many constructions or generated so much extra sales revenue, for example.”

As she and her co-author write, previous employer status “functions like a currency, allowing people on both sides of the transaction to measure their value in mutually understandable terms”. Prior employer status also has an effect on job-seeking strategies: “You make your own assessment of your desirability,” says Roxana Barbulescu. Candidates are unlikely to put in the time and effort to apply – and risk rejection – when they feel it is unlikely that they will be offered a position. But are job-seekers choosing the best strategy?

Playing it safe in competitive markets

The researchers analyzed job-matching strategies by taking into account the varying degrees of competitiveness of jobs (which can also be described as the easiness with which candidates can land jobs if they want). The first dimension of competitiveness is the relative demand and supply of candidates and openings. Their expectation was that employers could afford to be selective, hiring candidates with high-status prior affiliations only for a select few sought-after openings (“hot jobs”) and could not afford to be selective when vying with many similar firms for candidates from the same pool. On the applicant side, they supposed that when the number of potential candidates outnumbered openings, these were likely to attract stronger candidates and deter weaker candidates.

To test their hypotheses, the researchers studied the job-searching activities and outcomes for more than 800 graduates from the MBA program of an elite European business school, and rated the prestige of their past employers according to Fortune and Vault rankings. As expected, they found that graduates with lower-status affiliation (which represented 36% of the population) tended to play it safe: they ended up disproportionally in less competitive industry jobs, and away from competitive finance jobs (25%), with one exception: their proportion in consulting, a relatively competitive market, was not statistically different (33%) from their peers with more prestigious track records.

The other aspect of competitiveness theorized by the researchers was the degree to which job-seekers could prepare for a successful recruiting process. In other words, the perception of what constitutes a “safer” option is also shaped by how much applicants can prepare through mock interviews, workshops and other coaching sessions. Such preparations were offered by the Careers Center and student clubs at the business school from which the study's sample was chosen. The more standard the recruitment process, the easier it is to prepare.

“Interviews for the consulting sector tend to follow the same format — 5 minutes of chit-chat, 20 minutes of case study — so it's easy to rehearse,” says Roxana Barbulescu. And yet, she goes on to explain that there is a lot more variance in finance and industry interviews: “For industry jobs, interviews tended to be focused on behavior, asking how you acted in a certain situation, where there is not a right or wrong answer, contrary to a case study.” The results of their study again supported their hypotheses, namely that preparation could “compensate” for lower-status employment history. Overall, for the same level of competition (finance and consulting), those without prior employer status were more likely to apply for jobs for which they could prepare; given the same difficulty of preparation (finance and industry), those without stellar CVs tended to apply to less competitive jobs.

Students lacking prior employer status were no less likely to get offers in competitive jobs such as finance or consulting.

Of course, the outcome of job-matching process is also dependent on employers' preferences. The researchers expected that candidates with shiny track records would be more likely to be offered positions, upon applying, by the more competitive jobs. Yet to the researchers' surprise, students lacking prior employer status were no less likely to get offers in competitive jobs such as finance or consulting once they had applied. And some employers, notably for industry jobs, even preferred to make offers to those who lacked such affiliations.

Possibly, employers who recruit for the least competitive jobs in a given market cannot afford to be too selective if they want to conclude their hires. “After all, companies also compete with each other,” muses Roxana Barbulescu, citing employers’ attention to rankings such as Great Place to Work as proof that companies are not systematically in a strong position when trying to hire. In addition, she says that career offices also play the role of “gatekeepers”: “For example, they help supply recruiters with information about the courses and activities students take part in. Previous employment is just one signal among others.”

How to Reach the Top Position? Employer brand: The value of a name

While the study examines an elite segment – MBA graduates – its findings can be generalized to many sectors in so far as the job-matching process is two-sided: “Both parties are vying for a match!” points out Roxana Barbulescu, repeating that companies can't afford to be picky if there are many openings in the sector. She encourages job-seekers to not underestimate themselves: “Some take themselves out of the running when they feel they aren't qualified whereas they actually had chances; instead, first do your homework, and then decide which path to pursue.” She also believes that a clear, streamlined hiring process, for which it is easier to prepare, might be interesting for companies looking to attract a wider variety of profiles.

The researchers collected detailed information about job search activities, collected through two surveys, from a sample of 836 MBA graduates from an elite European institution covering applications, offers and acceptances between 2005 and 2007 (before the 2008 financial crisis). The data was supplemented with rankings from Fortune's Global Most Admired Companies and from Vault to rate the prestige of prior employers in the job-seekers' career histories. The researchers then compared the distribution of graduates in the sectors they eventually ended up in.
Based on an interview with Roxana Barbulescu and on her paper, co-written with Rocio Bonnet, Outrunning the Past? Prior Employer Status and Job matching in the MBA Labor Market  (forthcoming).
Related topics:
Human Resources
Organizational Behavior
Strategy
Download & Print
Share
FACEBOOK
TWITTER
LINKEDIN
EMAIL

Roxana Barbulescu's research focuses on the mechanisms underlying the career trajectories of managerial and professional workers. She has examined how...