Whether it is feedback on an ongoing project or a reference letter for a job application, we could all use a little help from time to time. But, when you ask for that help, do you imagine receiving a quick glance, or a close examination of your work and detailed comments? A perfunctory text or a carefully thought-through letter? You might be surprised. A new article shows that we often underestimate the lengths to which others are willing to go when they agree to help us. 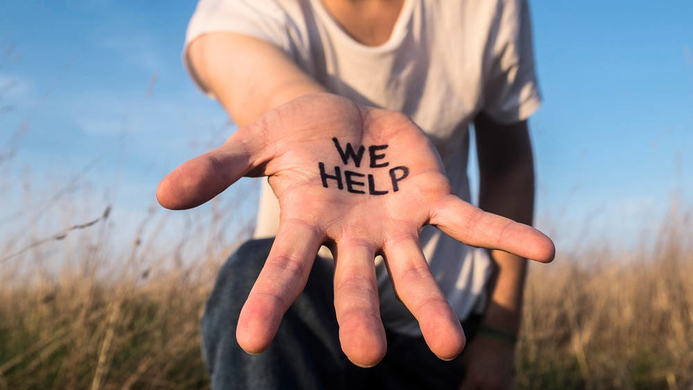 “Can you help me?” Four very simple words, but sometimes they are hard to say. What if asking for help makes me look incompetent? I'll never get that promotion. What if they say no? I will feel terrible. What if they say yes? I will owe them. What if they say yes and turn out to not be helpful after all? I will have wasted my time, and theirs. And so on and so forth. There is no end to the list of different possible stresses and anxieties that can run through the mind of someone pondering whether to ask for help. And yet, help is a big part of organizational life, whether it takes the form of giving feedback on a presentation, writing a reference letter or just fixing a paper jam in a photocopier.

“I can't think of many people who can do their jobs without help. At some point, most of us come across tasks that we’re not sure how to carry out,” says Daniel Newark, who researches helping behavior. “Help — both giving and receiving it — also makes us feel good, reminding us that we are part of a community,” he adds. Still, sometimes we hesitate to ask.

Is it worth asking for help?

Besides the “costs” (notably, time and stress) of requesting help, another factor determines whether we ask or not: the accuracy of our expectations about the outcome. This means not only the anticipated likelihood of getting help – if I ask, do I think the person will say yes or no? – but also the anticipated value of getting help – if they say yes, how helpful do I think the help will actually be? Would I be better off figuring things out myself? Daniel Newark and researchers Vanessa Bohns and Francis Flynn have just published an article in which they show how much and why we incorrectly estimate the effort others are willing to expend for us.

How do you measure helpfulness? “We chose to focus on helper effort because it is the factor most within helpers’ control,” says Newark. The authors hypothesized possible reasons for misestimating the effort that helpers are willing to invest. Previous research suggests that helpers' compliance is often interpreted by help-seekers as a sign that these are helpful people. In reality, however, helpers might not feel much pressure to try hard once they have said yes.

In Daniel Newark’s words, “Helpers may think they have already earned 'moral credit' just by agreeing to help.” These dynamics would presumably lead help-seekers to overestimate help effort. In fact, however, the researchers’ data actually indicate the opposite – that help-seekers tend to underestimate the effort that helpers will give (in the same way they tend to underestimate the likelihood of receiving help, as previous work by the same researchers has shown). What drives the efforts of helpers? Once someone else is dependent on us, we face the prospect of feeling guilty for letting him or her down. We also experience pressure to behave in a manner consistent with our previous actions and statements. “We feel a sense of responsibility, an obligation to follow through,” says Daniel Newark. The researchers’ experiments provide consistent confirmation for this.

When you don’t think it’s worth it to ask for help, the quality of that help is probably higher than you expect.

The researchers carried out four different studies to gauge estimations of help effort. Before doing so, they conducted a pilot study to test their assumption that the expected quality of help plays an important role in people’s decision to ask for help: 92% of participants based their decision at least to a “moderate extent” on expected help quality and more than half (57%) said it would be an “essential” factor or influenced their decision to a “great extent.” In their first study, the researchers then explored help-seekers' estimations of effort on the part of helpers who had said, “yes” to a direct, in-person request for help with answering simple trivia questions. As predicted, the participants underestimated both the number of questions answered (49.03 on average versus an expected 24.74) and the time spent answering questions (4m36s versus 3min26s). In their second study, the researchers set out to evaluate whether the underestimation of effort was particular to certain helping scenarios or a general tendency. To do so, they set up a different helping scenario, asking participants to imagine a scenario involving writing a letter in support of a job application.

Consistent with the first study, the researchers found that help-seekers significantly underestimated the expenditure of effort on the letter from their helpers. In the third study, the researchers sought to identify the underlying mechanisms. Using four scenarios involving assistance between colleagues, they found that help-seekers failed to appreciate the level of discomfort that helpers feel at the prospect of providing poor quality help. They also found that such discomfort is strongest for helpers in response to imagining the situations that help-seekers would find themselves in if they do not receive the help that has been requested.

Putting yourself in the potential helper's shoes

It may sound surprising that when seeking help, we would fail to grasp the discomfort that helpers associate with not doing enough, since we ourselves are at times in the helper position. “It is curious, since we play both roles in our own lives,” agrees Daniel Newark. “But it seems that when we think about asking for help, we are so focused on the costs to the helper (effort, time) and our own anxieties about asking that we have a hard time taking the perspective of the other person—even if we have often been that other person.” He warns that knowing that others help out of discomfort can add another layer of complexity to the decision-making process. Learning that people underestimate help effort could incite some to ask for help more readily. “On the flip side, depending on your mindset, you might not always want to burden someone with the potential discomfort of a request.”

How to explain warm-glow giving?

Should we not think twice about asking for help? Daniel Newark hesitates “to make recommendations to people I’ve never met facing specific situations whose details I don’t know.” What he will say, though, is that when you don’t think it’s worth it to ask for help, the quality of that help is probably higher than you expect. The research shows that shyness (due to fears of looking incompetent, fear of rejection, and so on) is usually unfounded. Newark makes the case for more informed decisions, and, in a business context, he says that organizations could function better with help going back and forth more freely: “The less friction there is in asking for help, the easier it can be for resources such as information, expertise, and effort to find their way to where they are needed.”

The researchers started with a pilot study, asking 99 participants to answer two questions about what would drive their decisions to ask for help. They then carried out four different studies: one behavioral study with 50 individuals from two American universities asking 150 others to help them answer trivia questions, then two online studies with respectively 224 and 196 participants who answered questions about scenarios involving reference letters and other forms of assistance between colleagues. Finally, they carried out a second behavioral study with 102 participants helping each other prepare for a quiz.
By Andrea Davoust, based on an interview with Daniel Newark and the article “A helping hand is hard at work: Help-seekers' underestimation of helpers' effort,” by Daniel A. Newark, Vanessa K. Bohns and Francis J. Flynn, Organizational Behavior and Human Decision Processes , 2017, vol. 139, pp. 18-29.
Related topics:
Human Resources
Organizational Behavior
Download & Print
Share
FACEBOOK
TWITTER
LINKEDIN
EMAIL