Will the TTIP Lead to a “Race to the Bottom” in Environmental and Health Protection?

The trade deal currently being negotiated between the US and the EU is one of the most ambitious ever conceived, with a chapter dedicated to promote the convergence of the respective policies across the Atlantic. While this has triggered fears of a “race to the bottom”, i.e. to lower health and safety standards, a new paper argues that the treaty could actually be a chance to “level up” instead of down. 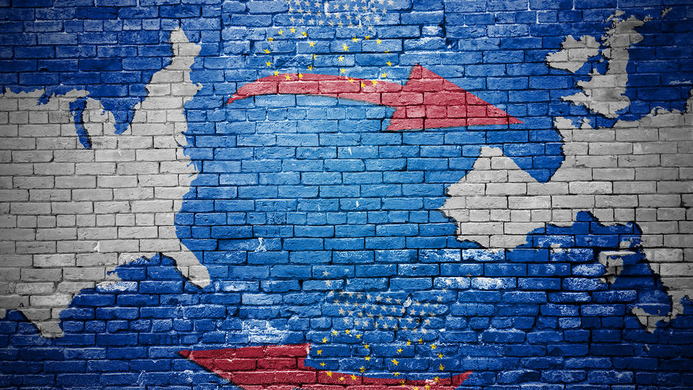 Will the much reviled Transatlantic Trade and Investment Partnership (TTIP) put foods laced with genetically modified organisms and hormone-fed beef on European plates? A major trade deal currently being negotiated between the US and the EU, the TTIP is meant to create the largest free-trade zone in the world, a region encompassing 800 million citizens and two economies that together comprise nearly half the world's GDP.

But the deal (still in the making) has sparked tremendous fears. Among Europeans in particular, it is perceived as a way to circumvent safety standards and jeopardize sovereignty. The TTIP goes further than other free-trade agreements in that it not only aims to eliminate tariffs, but also to fight “nontariff barriers”, i.e. obstacles to trade arising from different policies. Its Horizontal Chapter on Regulatory Coherence contains provisions facilitating the mutual recognition of US and EU regulatory standards: a product complying with the US standard could be automatically accepted in the EU market, despite not conforming to the EU standard. Analysts estimate that simply eliminating regulatory distinctions could yield economies of production worth $150 billion a year in the EU and $117 billion in the US. But would health and safety standards as well as national sovereignty be sacrificed on the altar of free trade, as many activists argue?

In an attempt to demystify and clarify the debate, Alberto Alemanno, Professor of EU law at HEC Paris, explored the challenges and promises contained in the regulatory cooperation chapter of the TTIP in his research paper.

The TTIP's so-called horizontal chapter applies to all EU and US regulations affecting transatlantic trade, ie. those goods and services currently exchanged; this is regardless of whether they are adopted at federal or national level. Yet pretty much any policy that defines a product characteristic or a consumer information scheme, such as a label, automatically represents a barrier to trade, since the vast majority of standards in many policy areas differ on either side of the Atlantic. “Virtually all EU policies would fall under it, unless a particular market is local, since everything has a vocation to be exported,” says Alberto Alemanno. He cautions, however, that the goal is not to allow every product in, be it a car, an apple or a financial product, but rather to create a system for regulators “to sit at a table and discuss whether a particular regulation will allow the same level of protection”. For instance, cars manufactured in the US are tested according to US safety standards, with different crash test dummies than in the EU. “But there is no reason why a car certified as safe in the US should not be accepted as such in the EU; after all when we travel in the US, we drive American cars,” he says.

This goes beyond simply identifying obstacles to trade, by developing “a new model of economic governance.

An innovative approach to regulatory cooperation

Alberto Alemanno points out that the trade agreement is not only ambitious in its depth, but also in its nature, in that it creates a permanent bilateral regulatory cooperation mechanism. According to the horizontal provisions of the TTIP, both parties should follow such good regulatory practices as publication of regulatory agendas, sharing of analyses of regulatory outcomes, exchanging information about envisaged and existing regulatory acts. This in turn should enhance compatibility, with the EU and the US working for example on the development of a common framework for hybrid cars or standards for electronic labeling. Such cooperation may take place both at the level of substantive and procedural standards. This goes beyond simply identifying obstacles to trade, by developing “a new model of economic governance,” says Alberto Alemanno. “This is what makes TTIP so important and controversial.”

Undermining sovereignty for the benefit of big business?

One of the criticisms that has been directed at the TTIP is that such a cooperation mechanism would directly affect sovereign rights. After all, it requires accepting that a particular policy can be questioned abroad. Alberto Alemanno counters by pointing out that trade liberalization since the GATT and WTO has always had a restrictive effect on the exercise of regulatory autonomy. Yet TTIP aims to change the mindset of legislators in that they must consider the implications of policies outside the EU. “But we can question whether the negotiators have the legitimacy – both in the sense of authority and acceptance by public opinion – to accommodate the economic interests of citizens living elsewhere,” he concedes.

Still, there is a risk that the TTIP will profit corporate interests more than consumers' interests. “It's a very important concern raised by civil society,” says Alberto Alemanno, who adds: “But corporate influence on society is a larger phenomenon than TTIP itself.” While it is likely that big businesses are more likely than civic advocates to initiate regulatory exchanges, Alberto Alemanno suggests introducing a participation fee for submitting a consultation in order to level the playing field: “The fee would be related to the resources (e.g. turnover, funding for lobbying, and so on) rather than the nature of the stakeholder, meaning not just BMW and Bayer would have to pay, but also big, well-funded NGOs, such as WWF.”

Last but not least, it has often been said that recognizing standards as equivalent would be an incentive to agree on the lowest ones, thus opening the door to Frankenfoods. On the contrary, Alberto Alemanno sees an opportunity for a “race to the top”. His counter-argument is that the EU proposal that discusses regulatory convergence aims to “level up” rather than “level down”. “Convergence will take place only if, following the agreement, the level of protection will be maintained equal,” he says. He sees an excellent illustration in the case of organic foods.

Five years ago, bilateral negotiations between the EU and the US took place to facilitate transatlantic trade of organic products, a growing market. As the levels of protection guaranteed by the EU and US regimes were judged equivalent, organic goods certified as such in the US could be imported into Europe without further tests and vice versa. “And since US rules on organic meat are stricter than European ones, totally banning the use of antibiotics (while traces of them are allowed in the EU), we made a visible gain in health protection!” he says.

The researcher recalls that a similar concern was raised back when the EU introduced the principle of mutual recognition, whereby goods legally produced in one country of the EU could be circulated anywhere in Europe (without having to comply with the legislation of the importing country), but says that companies did not flock to countries with lower standards. “As consumers pay attention to safety, businesses are not ready to take chances with their brand reputation,” he concludes.

Alberto Alemanno's piece was written as TTIP negotiations took place; it was read by negotiators on both sides of the Atlantic and presented both in London and in Washington in 2015. The author reports that his analysis was taken into account and that some of the new TTIP textual proposals already reflect it. &ldquo;It's gratifying to see that my work helped shape the debate and the legal drafting itself,&rdquo; he says. He is also glad that the media used it when covering the trade deal, including influential media such as the&nbsp;Financial Times&nbsp;and&nbsp;S&uuml;ddeutsche Zeitung. It was also picked up on blogs, including that of a large consumer association. &ldquo;I am simply making the case for an informed debate, based on facts rather than on anecdotes or stories,&rdquo; he says.
Based on an interview with Alberto Alemanno on his research paper “The Regulatory Cooperation Chapter of the Transatlantic Trade and Investment Partnership: Institutional Structures and Democratic Consequences” (Journal of International Economic Law, 2015).
Related topics:
Law
Regulation
Europe
Download & Print
Share
FACEBOOK
TWITTER
LINKEDIN
EMAIL