Can the COVID-19 Crisis Move Forward the Energy Transition?

Is the COVID-19 pandemic an opportunity for us to rethink our current energy system? Jean-Michel Gauthier, professor and Executive Director of the Energy & Finance Chair at HEC Paris, explains the global consequences of the coronavirus and paints a picture of the future of the Energy Transition right here at the heart of the European Union. 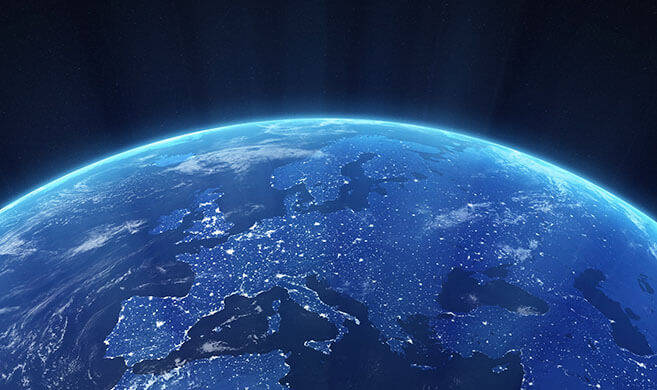 Can you explain the impact of COVID-19 on global oil prices and its long-term consequences?

For want of a proper treatment or vaccine against COVID-19, governments were left with cutting social ties and stopping business as the only one available policy solution.

With countries under lockdowns and travel bans, empty roads and empty skies, the coronavirus pandemic crunched oil demand so hard that crude oil prices fell below zero for the first time in ever recorded history.

The oil industry is not just going through another demand shock like in 2008 or 1998. Today it suffers the worst blow ever, which takes place after years of energy transition that had just started to curb demand, and which first and foremost happens against the backdrop of a Saudi-Russia price war that resulted in increasing an already over-supplied market.

At $30/bbl and below, nothing works at all in North America and up to 60% of the US production becomes uneconomical. The “US energy independence” is under serious threat and the US is better off importing Saudi oil again.

The repercussions of this unprecedented price collapse are potentially phenomenal for oil producing countries, where the revenues have been slashed by up to 80% back in April/May. Worst hit are Venezuela and Nigeria, but also Iraq, Kuweit as well as those who never managed to diversify their economy away from the extractive industries.

For some oil majors, the situation could become a matter of long-term survivability and a new business model has to be found. Before pandemic, the oil majors thought they could pay down their debt, ramp up dividends, and invest into cleaner-energy businesses at the same time. Under a 30$/bbl or below, they cannot continue produce at a profit, further reduce costs, and maintain dividends.

They could consider disposing of mature assets. But we know that selling assets at a time of downturn is not the most attractive option. Ironically enough, this situation could have a huge backlash against the Energy Transition. Let’s not forget that the oil majors’s technical and financial capabilities will be an essential contribution to a low-carbon economy.

Will COVID-19 slow down or halt the progress of the Energy Transition? How?

I can see at least 3 causes for concern:

1- With an oil price as low as $ 30 /bbl, fossil fuels with high carbon emissions could offer competitive alternatives to renewable energy sources. That might jeopardize the Energy Transition.

2- Return to business as usual could result in a significant level of CO2 emissions, as the world saw after the 2007–08 financial crisis. By 2010, emissions had reached a record high, in part because governments implemented measures to stimulate economies were directed to heavy industries and carbon emitting sectors. History could repeat itself and derail the action course consistent with the objective of 1.5°C to 2°C.

3- Pandemic could leave governments too debt-strapped to finance emission cuts, and the combat against climate change might drop by a few notches in the order of priorities.

In actual fact my view sits at the other end of the spectrum. I believe that the pandemic might on the contrary act as an accelerator of past trends (including fight against climate change) rather than slow down or halt the process.

I believe that the pandemic might on the contrary act as an accelerator of past trends (including fight against climate change) rather than slow down or halt the process.

Pandemic and climate accidents are very similar in nature. Both exogenous, physical, largely unpredictable systemic shocks destroy economies, businesses and lifes. Post-pandemic geopolitics give us evidence of that, if we look at how the COVID-19 crisis speeds up (i) the big disconnect between Asian and Western, (ii) the US pulling out of multilateral organizations, or (iii) Washington showdown with Beijing. All these trends were already well underway.

Should COVID-19 be an opportunity to rethink our current energy system and transition?

Most EU member states leaders, and the International Energy Agency, have made it loud and clear that there is no way out of the COVID crisis other than committing further to the EU decarbonisation policy and carbon neutrality objective.

The amount of the package, which includes a mix of grants, loans and guarantees, is mindboggling and reaches a total of 1.85 tn € which has been committed to kick-start the EU economy again. This amount (close to 2 US$ tn) is equivalent, in real dollar terms, to more than 10 times the 1948 Marshall Plan to rebuild Europe after the War.

The repayment of the loan portion is understood to come from the EU’s emissions trading system, a plastic tax, a levy on digital giants. It is due to start 2028, finishing 2058. A point in time when the EU is meant to be carbon neutral or even carbon negative.

The question now is: having realised that the EU model is not sustainable with its dependency on China and the GAFAMs, will we be serious about reshaping globalization, shortening supply chains and developing new technologies, or are we going to revert back to the world before the pandemic?

If the European Recovery Fund is used as another Government package to stimulate demand, then our massive investment into a new EU low-carbon energy mix will give the old world a new life, and we will continue importing Chinese solar panels, transferring value to China and supporting Chinese R&D. And the EU will fall short of the technologies and other components necessary for its Energy Transition for a lot longer.

Instead of importing maturing technologies, the European Recovery Package should be used where everything starts: investing in EU Research & Development of technologies, EU universities and EU labs. Because sovereignty always starts with the command of technology.

Instead of importing maturing technologies, the European Recovery Package should be used where everything starts: investing in EU Research & Development of technologies, EU universities and EU labs. Because sovereignty always starts with the command of technology.

Jean-Michel Gauthier is Professor at HEC Paris and Executive Director of the Energy & Finance Chair sponsored by Société Générale.