The September 26 federal elections in Germany have been earmarked as one of its most important in the past two decades. For a start, it signals the end of Angela Merkel’s tenure as Chancellor, after 16 years at the helm of Europe’s largest economy. To comment on this landmark vote, its uncertain outcome, and economic outlook, we turn to Armin Steinbach, HEC professor in law and economics. Steinbach is ideally placed to comment: prior to his September arrival at our business school, he spent over a decade as a government official and adviser in the Ministries of Finance and of Economic Affairs and Germany’s Parliament. 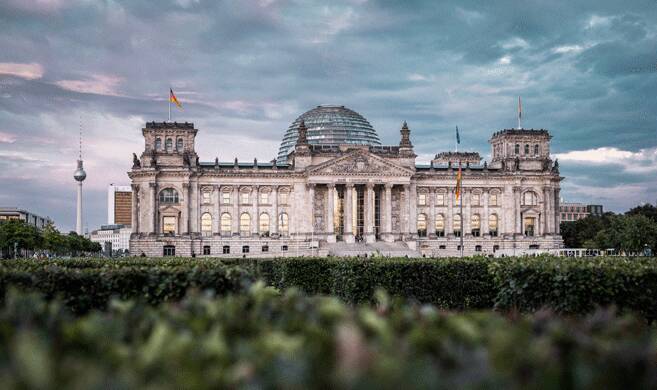 Photo by hoch3media on Unsplash

listen to the podcast

As many predicted, the results of the September federal elections are by no means conclusive. Let’s take a step back: you followed the election campaigns before the vote. Just how divisive were the debates over Germany’s economy during the months of electioneering?

A number of controversial issues cropped up. To begin with, tax policy which, traditionally, allows political parties to distinguish themselves from each other. On the one side, the Social Democrats and the Green Party underlined the inequalities in society and the lopsided burden-sharing witnessed during the COVID-19 period. They demanded a higher tax rate on high income and a wealth tax. On the other side, the Christian Democrats and Liberals pushed for tax reduction across income groups and a reduction of bureaucracy.

The second debate centered on climate policies and its major economic repercussions. The Greens promoted a very ambitious plan to expand renewable energy and to move away from fossil energy. They also demanded the prohibition of some technology, such as combustion engines and the early phase-out of coal. As you probably know, next year Germany will be phasing out nuclear energy and coal energy will stop in 2038. The Greens want to accelerate this process, while the SD (Social Democrats) and other parties are a bit more reluctant. Still, climate ranks very high on all political programs.

The third and last controversy centers on public investment. Everyone agrees there’s too little investment in the infrastructures of cities, schools, and so on, which have seen a fall in quality. They differ on solutions, however: on one side of the political spectrum, there are calls to change Germany’s debt brake, the catchword Schuldenbremse is on everyone’s lips. This is engraved in our constitution and requires that the budget be structurally balanced. On the left, politicians see this as overly restraining public expenditure, especially in the macro-economic environment that would allow for more debt. But it’s a very touchy issue because the Christian Democrats and Liberals are very fond of the debt brake, it’s become a symbol, a political identity, illustrating their attempts for fiscal solidity. Yet, it has major repercussions for us and for Europe.

What kind of legacy would you say Angela Merkel has left in terms of the country’s domestic economy?

At first sight, you could say she leaves a strong and decent legacy. The GDP, compared to the years 2000, employment, fiscal solidity – all these went in the right direction. But you could question just how much it was her work, and how much was a heritage from the previous government’s reform of the labor market. Merkel also maneuvered well through the various financial, sovereign debt and pandemic crises and has shown she is an assertive leader and has guaranteed a degree of social cohesion.

Merkel also maneuvered well through the various financial, sovereign debt and pandemic crises and has shown she is an assertive leader and has guaranteed a degree of social cohesion.

But there have been clear shortcomings in, for example, dealing with climate and digitization questions. In particular, there have also been problems in her handling of digitization in public administration, education or Internet connectivity. The latter is embarrassing! Germany’s ranking in Europe is one of the lowest, only Albania is worse. Major changes need to be crafted.

What other changes do you think need to be addressed in the ongoing negotiations to create a new government?

One aspect - which has been under-represented in these electoral debates, in my opinion - is the question of reforming the pension system. Germany has more and more people retiring, provoking a huge demographic problem. The workforce is shrinking, the OAP population is spiraling up. There are three ways to answer this issue: you can increase the retirement age, a politically sensitive decision; you can reduce the retirement pension. Or there’s a third option: opening up to more immigration, to offset the older population, something attempted by the Merkel administration.

It’s a controversial discussion but the fact is that, without immigration, Germany won’t solve the demographic problem.

This is also backed by the Liberals and Greens. But, on the political landscape there is the AfD party, which is against any form of immigration. And the CDU has recently picked up on this stance somehow. It’s a controversial discussion but the fact is that, without immigration, Germany won’t solve the demographic problem.

You have been bridging academia with your life as a senior civil servant for years. Now, you’ve decided to devote yourself to your academic career. What relationship will you maintain with politics?

Politics has given me a rewarding and varied career and I will not be entirely disconnected from it. I served in the Finance and Economic Affairs ministries, and in the German Parliament and have built strong relationships with colleagues there. From my new home at HEC Paris, I will try to contribute to the ongoing political discussion and, where advice is needed, I will be happy to provide it. I’m certainly following developments closely. One part of me will always remain in policymaking, and I’m looking forward to contributing to my former profession.

One part of me will always remain in policymaking, and I’m looking forward to contributing to my former profession.