How Can ECB Measures Help Governments and Businesses to Face the COVID-19 Crisis and to Recover From It?

In this interview, Gaetano Gaballo, Associate Professor of Economics at HEC Paris and formerly research economist at the European Central Bank (ECB), reminds the role of the ECB, explains its first move in response to the COVID-19 crisis and the markets reaction. Gaballo also shares his analysis on what are the likely challenges that the ECB, and the Eurozone in general, will face in a near future. 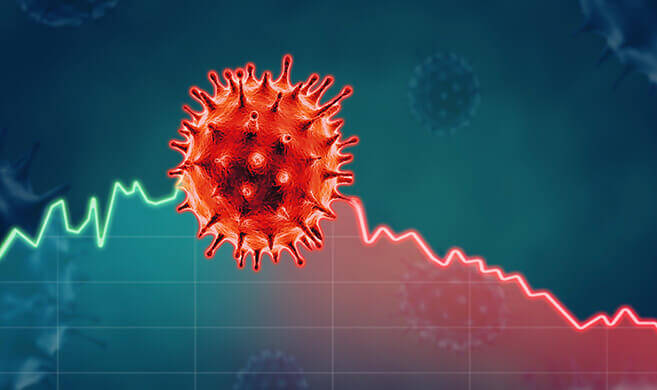 Can you remind us the role of the ECB and public monetary in general?

The main objective of a central bank is to keep inflation stable. The one of the ECB in particular, is targeting inflation below but close to 2%. By fulfilling this objective, the ECB makes the value of one Euro highly stable and predictable, which is vital to the well-functioning of our economy. Let us have a closer look, for instance imagine you provide a service today and you have to decide in which currency you want to be paid tomorrow. For sure you do not want be paid in a currency that, because of unexpected inflation, could lose value tomorrow. At the same time, your costumer will never sign to pay you in a currency that could suddenly appreciate because of deflation. A currency that promotes transactions in an economy is one for which inflation or deflation risks are small. In this sense the credibility of the Euro as a transaction currency, inside and outside the Eurozone, is crucially linked to the ability of the ECB to target a predictable and stable value of inflation.

The credibility of the Euro as a transaction currency, inside and outside the Eurozone, is crucially linked to the ability of the ECB to target a predictable and stable value of inflation.

How the ECB can achieve its objective?

What was the ECB's first move in response to the crisis?

On the 12th of March, in response to possible weakening of the economy after the COVID crisis, the ECB has decided to act on two fronts. On the one side, it will extend lending to banks in order to ensure cheap and long-term financing. Technically, the ECB is not lowering further the short-term interbank rate, as it is already at an historical low, but it is granting an exceptional low rate on long-term loans. On the other side, it is increasing its asset purchases program (APP) by an additional €120 billion to be spent before the end of 2020. By this second type of policy, the ECB directly buys assets, instead of lending. This policy directly affects markets rates in periods of high financial distress, reducing the reliance of the transmission of the monetary impulse on the banking system.

How did the markets react?

The markets reacted quite abruptly after the first ECB move. Commentators interpreted this as a sign of disappointment for the measures taken. According to the prevailing mood on the press, because of a likely large drop in GDP, the ECB should have done much more, especially to keep spreads - i.e. the difference in returns between bonds across Euro countries - low.

In particular, during the ECB press conference of the 12h of March 2020, President Lagarde has been highly criticized for having said that “we are not here to close spreads”. Following these critics and a quite rapid surge of spreads, the chief ECB economist Lane adjusted the tide by declaring “ECB ready to act on widening bond spreads” just a day after Lagarde’s conference. Finally, on the 18th of March, an increase of the APP program by an additional €750 billion has been announced in a press release.

Do you think that the ECB response is now sufficient to help governments and businesses to face this crisis and to recover from it?

The ECB has certainly done, maybe with some initial hesitation, what should have been done in a situation like this: reassure people that it will do everything in its power to reduce the impact of the COVID-19 crisis. However there are aspects of the current situation that deserve attention.

Everybody criticizing the ECB response to the COVID-19 crisis focus mainly on these two aspects: how much its action is going to help in the recovery of the economic activity and how much it is going to narrow spreads. Well, there are two big challenges related to these two goals.

The first challenge applies nowadays to all economies. Normally, inflation and GDP growth move together along a business cycle, so most of the times when activity goes down prices go down as well. This is because the economic cycle is dominated by demand shocks, economists usually say. This means that the economic activity moves more often because of changes in the willingness to spend rather than in the ability to produce. Only in case of a demand shock, as activity and prices move together, there is no conflict between stabilizing prices and growth. Now the question is: are we sure that the COVID-19 is a demand shock? In other words, is the epidemic going to affect more the willingness of people to spend or the ability of firms to produce? I guess noone knows, we must wait for a better understanding of the consequences of what is currently happening.

However, if the COVID-19 takes the form of a supply shock, a conflict between stabilizing prices and economic activity could instead arise. A bad supply shock depresses economic activity but pushes prices up. So stabilizing the economy by further easing monetary conditions may exacerbate an inflationary pressure and so push the ECB further away from its objective to stabilize prices. This combination would be a very difficult one to handle for the ECB, which has a mandate exclusively in terms of price stability. Fortunately, we come from a situation in which inflation is largely below target and the development of oil prices makes hopefully this scenario highly unlikely at the moment. Otherwise, central banks could be confronted to the dilemma of choosing between price stability or economic recovery.

Stabilizing the economy by further easing monetary conditions may exacerbate an inflationary pressure and so push the ECB further away from its objective to stabilize prices.

The second challenge is peculiar of the Eurozone. In the Eurozone, there is only one interbank rate, but the interest rates applied to households in the different countries are also influenced by the developments of national public debts. Therefore, it happens that, if the ECB lowers the interbank rate and a spread opens between the German and the Italian bond, the monetary transmission gets interrupted in Italy, as rates applied to households do not fall as much as they should. It is because of this phenomenon that in recent years, the ECB has also acted in such a way to preserve monetary effectiveness in all countries by narrowing, through special policies, spreads whenever too large. However, spreads move in relation to the fiscal conduct of countries and the intervention of the ECB can only be considered as a backstop for exceptional and temporary circumstances.

Countries need to convince markets about the solidity of their fiscal plans irrespective of ECB interventions. This is particularly important for the future prospects of Europe. In an unprecedented situation as the current one, a solid fiscal plan could require countries to eventually operate vast fiscal redistribution and, possibly, increase taxes to repay exploding debt in a medium-term horizon. This is far from being obvious or simple. This is the reason why all the unresolved fiscal coordination between countries could put a too heavy burden on the shoulders of the ECB. In this sense, one may understand the initial reaction of President Lagarde that, although too premature and awkward, is a symptom of an existing tension and a real challenge.

Centuries of divisions and persisting cultural differences among European countries cannot be canceled in few months, but any progress towards any form of European common debt will be warmly welcome.

The effectiveness of the Eurosystem response will therefore depend on the solutions given for these two challenges. In my opinion, the main weakness of the Eurozone at the moment, is the lack of fiscal coordination between countries. Such lack also weakens the action of the ECB, which is often called to fill that gap pushing the boundaries of the strict pursue of its mandate. The issuance of a common debt, e.g. in the form of Eurobonds, would solve the problem at the source. Unfortunately, centuries of divisions and persisting cultural differences among European countries cannot be canceled in few months, but any progress towards any form of European common debt will be warmly welcome.