The Microeconomic Impact of Different COVID-19 Lockdown Strategies in France

On March 31, 2021, French President Emmanuel Macron announced a 4-week national lockdown, throwing the country into a similar situation slightly over a year ago. This time though, not all businesses are affected in the same way. On Knowledge@HEC podcast, HEC Paris Associate Professor of Economics Tomasz Michalski analyzes the possible microeconomic impact of the different lockdown strategies, and its eventual long-term effects. 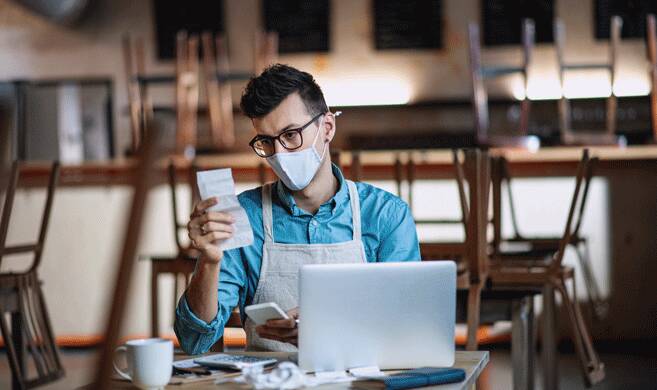 How different are the measures of the second lockdown in France?

Last year, harsher measures were warranted to abate the virus spread. This year, there is hope that the ongoing vaccinations with the milder lockdown – say beginning of June – to an eradication of the virus in France.

The current lockdown is shorter (4 weeks in total) and less strict: there is freedom of movement within 10 km, a wider definition of “essential” businesses lets many more businesses open, there are 3 weeks of school closures, but 2 weeks of those were supposed to be Spring break. Approximately 15% of workers must stay at home involuntarily to take care of children, and approximatively 40% of GDP losses in the first lockdown in 2020 were because of school closures. The long-term consequences for children cannot be underestimated either. Finally, homeworking is strongly recommended, with one day in the office per week.

How will such a differentiating strategy affect the local economy?

This different strategy has disparate consequences on the economy than the first one, for two reasons.

First, these restrictions leave more freedom to the citizenry. More businesses are open, and the looser restrictions cause that people work and shop more. Google mobility reports show that the last years confinement led to twice as high drops in economic activity in terms of visits to retail outlets or workplaces – up to 80% in comparison with the pre-COVID-19 situation. Consequently, more businesses will survive in the long run than if we had a similar strategy this time as last year.

There are many factors that cause that this year’s impact of the lockdowns will be more benign than last year irrespective of the looser restrictions.

During the lockdown in March-May 2020, it was a surprise, and there was great ambiguity about the evolution of the pandemic. Many industries (including manufacturing) initially ground to a halt, and were operating at low capacity later on. There was a strong negative import supply shock from all over the world (China, other Asian countries, Europe…). Necessary inputs were not arriving to factories.

This time, external demand conditions are favorable: Chinese, U.S., UK economies are strongly rebounding, continental Europe is holding on and will recuperate quickly once the third wave is handled in 2-3 months – at least those are the expectations, as seen in many leading indicators, including the behavior of the stock market or purchasing manager indices.

How has the local economy become more resilient since the beginning of the crisis? If it has not, why not?

The behavior of economic agents evolved as well. Firms and customers invested in computer hardwares, e-technologies, and know-how. Insee’s surveys show that larger firms, those with more than 50 employees invested in online sales.

None of the key sectors in the production network is especially affected.

As a consequence, many sectors (e.g. industry) found now their level of pre-crisis activity. None of the key sectors in the production network is especially affected. The motor vehicle sector is a stark example. During April 2020, the activity level in this sector was barely above 10% of the normal, while now it surpassed its pre-crisis volumes.

As a result, GDP in April 2021 should be lower by 7% in comparison to the pre-crisis period, while in April 2020 it was lower by a whopping 31%. Banque de France still predicts a strong 5.5% GDP growth overall in 2021 as the economy rebounds.

How far can government aid stop the economic bleed for individual businesses?

The government can help. The main new measures introduced last year that targeted businesses – such as furloughing workers or guarantees for loans based on past revenue – did a lot in preserving the fabric of the economy – the employee-employer relations or buyer-supplier links. They were unprecedented in scale and stopped short of a de facto nationalization of firms, and the uptake was massive, especially in the most affected sectors. They still are in place. But there are limits to that intervention.

Will the workers remain with the previous firms as lockdowns persist or will they move on to other jobs? This is what often happened in the US. Will the firms themselves survive?

Questions are about the viability of many businesses – especially restaurants, hotels, tourist attractions, discos. The demand may come back for these services in the medium term, but then will the same businesses survive? Or will there be a string of bankruptcies, with assets changing hands? For some, decades of hard work and capital accumulation lost.

In other sectors, smaller firms lost at least one supplier or buyer more frequently than the large ones. Insee’s reports say that this happened to 48% of firms with 10 to 49 employees, but only to 30% with more than 250 employees. Moreover, smaller firms have fewer buyers and suppliers, so were more severely impacted. So the production network has changed.

Investment in online capabilities was done particularly by large firms that became more productive, but this is also means the barriers to entry increased. Competition became more intense, with online stores where customers can compare prices more easily – also international – being present in the French market.

A demand stimulus will help, but perhaps there needs to be some targeted measures to expand technological capabilities of firms.

A demand stimulus will help, but perhaps there needs to be some targeted measures to expand technological capabilities of firms. Both from public investment (broadband stability which is not a done deal, 5G networks) but also within-firm transitions to expand online, AI or robotics capabilities.

Aid for entrepreneurs that lost their entire livelihood, especially in the most-affected hospitality industries if they want to start anew, is needed. These people are often leaders in small local communities, and we will not lose entrepreneurial talents.

What about the long-run consequences?

Will the new consumer habits persist? For example, in terms of travel, are we going to come back to old normal? Studies now show that conferences in the sciences are not correlated with scientific output.

While teleworking has been shown to be effective in simple tasks such as call centers or improved the satisfaction of many office workers in the short run, the long-term impact on productivity of teleworking is unclear. Think about starting new, complex projects in teams. Moreover, Insee’s surveys show that e-working solutions were available within a sizeable proportion of firms for a long time, but they did not take a massive recourse to them. So was it just a question of adapting to the new technology?

The skilled employees can telework in large cities and many are thriving, while the poorest – many in face-to-face tasks or in sectors most hit by COVID-19 (hotels, restaurants, transport) – were furloughed or lost their jobs.

Regarding the social and political consequences, there are K-shaped impact and recovery. The skilled employees can telework in large cities and many are thriving, while the poorest – many in face-to-face tasks or in sectors most hit by COVID-19 (hotels, restaurants, transport) – were furloughed or lost their jobs.

Throughout France, most impact in commuting zones that were heavily exposed to tourism or manufacturing of transport equipment, are typically the more prosperous ones.

Many of the heavily hit regions (e.g. Savoie, Alsace, Saint-Nazaire, Honfleur, Sarlat-La-Caneda) voted strongly for Macron in the second round of the presidential election. Will the missteps of the current administration benefit his potential opponents? Time will tell.