President of the European Central Bank: Do we Need a European Superhero or a Good Manager? (2/2)

Are there fundamental institutional differences between the central banks of the euro area and the United States, and if so, what are the consequences? In this second part of a two-part article, Jean-Edouard Colliard shares his analysis. Jean-Edouard Colliard is an associate professor of finance at HEC Paris, where he is also the co-holder of the Chair "Business Analytics for Future Banking" (HEC Paris, Natixis and Ecole Polytechnique). Prior, Prof. Colliard was an economist at the European Central Bank. 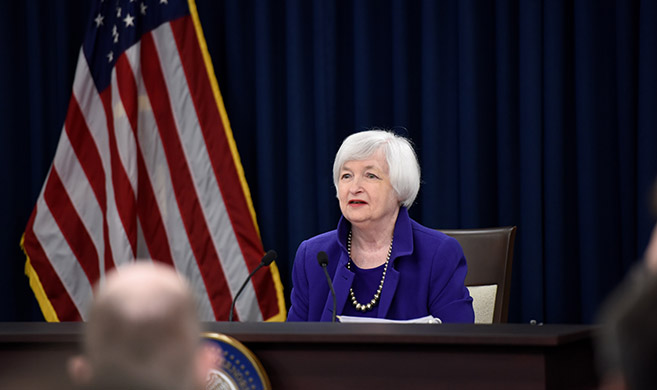 Cover Photo: Janet Louise Yellen, American economist at the Brookings Institution who served as the Chair of the Federal Reserve from 2014 to 2018.

There is, however, an interesting difference between central banks of the U.S. and the Euro Area relative to the profiles of the governors, which may affect the way they incorporate the information produced by the staff. In the United States, the Presidents of the 12 Federal Reserve Banks all have a very similar profile: 7 of them have a PhD in Economics, one a PhD in Engineering, and the remaining ones a MBA. Moreover, many presidents served as head of research in a Federal Reserve Bank and are established researchers. According to Google Scholar, all the Federal Reserve Bank presidents with a PhD in Economics have at least one article with more than 1,000 citations (an extremely influential article), and several of them have more than 10,000 citations of their entire work.

Of course this was also true of several chairpersons of the Federal Reserve in the past. In retrospect it seems incredibly lucky that, two years before the financial crisis, George W. Bush happened to nominate Ben Bernanke, an expert on the U.S. Great Depression and one of the few macroeconomists at the time who had worked on macroeconomic models with crises induced by financial frictions. Janet Yellen is one of the important “names” in neo-keynesian economics. To take one example, her paper “Can Small Deviations from Rationality Make Significant Differences to Economic Equilibria?” (AER 1985), joint with her Nobel-prize winning husband George Akerlof, is the one I always cite when I’m asked to name a microeconomics paper that gave me a real intellectual epiphany.

The presidents and governors in the European System of Central Banks have a completely different profile. Among the 19 national central bank governors, 7 have a PhD or doctorate in economics, and few if any of them have published papers in international journals. Two exceptions are Pablo Hernandez de Cos (Bank of Spain), who has more than 2,000 citations, and Jens Weidmann (Bundesbank), who has an influential policy paper with more than 1,000 citations.

The Federal Reserve System thus seems to value the skills of research economists, whereas European countries appoint central bankers with different skillsets.3 There is, however, no clear gap in academic expertise between the two systems. Philip Lane, the current “chief economist” of the European Central Bank (ECB), as well as Frank Smets, formerly advisor to Mario Draghi, are examples of very well established researchers (with 27,225 and 21,113 citations, respectively), who can be compared with the most respected economists of the Federal Reserve System.

It may actually be perfectly sensible to appoint non-economists or non-research economists at the head of a central bank.4 The study of Romer and Romer (2008) would support this idea: the staff is in charge of explaining the different choices available, their economic consequences, and the trade-offs involved, and the governors select what they see as the best option, which may be a political rather than an economic decision. In line with this idea, many people seem to expect that Christine Lagarde will rely on the economic expertise of the two academic economists part of the ECB’s Executive Board, Philip Lane and Isabel Schnabel, and assume a more political role.

In addition to providing expertise, economists have another important function in central banks, which is to frame the decision process as essentially a scientific or technocratic matter. When monetary policy is debated by research economists, which policy to adopt is essentially an academic debate, in which politics play little role. In contrast, it is striking how much central banking in the Euro area is loaded with politics: does monetary policy imply a disguised subsidy to “deficit” countries, does it weaken incentives for some governments to conduct reforms, does it harm the banking system of some countries relative to others, should it support green policies, etc. In such a context, it is not surprising that the appointment of the ECB’s president is seen as a competition for influence between different members states rather than the search for the most competent person possible.

The appointment of the ECB’s president is seen as a competition for influence between different member states rather than the search for the most competent person possible.

Although monetary policy decisions have political consequences, and thus are political decisions as well, we know from historical experience that central bank independence is important, and that political influence on the central bank is a recipe for instability and inflation. To simplify, the balance that was found in the last quarter of the 20th century5 was for the legislative power to give the central bank a certain mandate (e.g., keep inflation close but below 2%), and to agree ex ante to the redistributive consequences that the necessary policies would imply (e.g., indirectly hurting growth and increasing unemployment when necessary to fight inflationary pressures).

This separation between central banks and politics becomes more and more difficult to maintain with the growing importance of central banks in the economy, especially with quantitative easing: by buying large quantities of assets, the central bank is affecting not only the total level of money in the economy in a neutral way, but also affecting how capital is allocated, thus creating winners and losers.

This separation between central banks and politics becomes more and more difficult to maintain with the growing importance of central banks in the economy.

While the general trend towards more and more political interference in many countries is worrying,6 it is to some extent logical that the political sphere requires more control over central banks’ decisions when these decisions become more consequential than what had been expected ex ante. Perhaps what needs to be found here is a new “contract” between the legislative power and the central bank, updated to reflect the realities of quantitative easing and other “non-standard” monetary policy tools.

Can the central bank be more mature than its monetary union?

Mario Draghi recently pointed out how much progress the Euro area had made since its still recent creation, and how its resiliency during the financial crisis and its current stability defy the very pessimistic odds that the common currency was facing at the beginning.7 Christine Lagarde recently suggested that the ECB should take stock of the progress accomplished, be more self-assured and adopt a less defensive stance, for instance by being open to publishing dissenting opinions inside its governing council.8

This is hopefully a signal that the ECB will move out of a permanent “crisis mode” and become a more mature institution. Ideally, in my opinion at least, this should mean becoming the benevolent, important, but relatively boring institution that a central bank should be: a place where technocrats decide marginal changes to policy rates so as to maintain stable inflation and maybe to some extent smoothen the business cycle. Perhaps this is too much to ask from the ECB at the moment, because the Euro area lacks the governance mechanisms and the fiscal tools that would allow monetary policy to be restricted to its core function. Christine Lagarde seems determined to use her position to push national governments to solve these issues.9 If this attempt is successful, her legacy could be to have contributed to creating a truly mature monetary union. If not, the outcome might be that the president of the ECB will become a minister of finance of the Euro area “by default”, which in the long run may not be compatible with the political independence of the ECB.

Christine Lagarde's legacy could be to have contributed to creating a truly mature monetary union.

3 This difference seems to affect the speed at which academic innovations are transmitted to policy, as noted in this interview by HEC professor Gaetano Gaballo.
4 This does not mean that the reliance on more academic economists in the U.S. is a bad thing either. A unique quality of economists who are active in research is that their knowledge of economics is up to date and they can quickly take academic breakthroughs into account in their policy decisions. Conversely, consider a hypothetical 60-year old central banker at the start of the crisis in 2008, whose study of economic research stopped in his formative years. This person would have had to rely on conceptual tools from the 1970s. Worse, it is not unimaginable that our central banker may have studied economics only with non-research active professors, who themselves were relying on tools from the 1950s!
5 Central bank independence in itself is a much older concept though. See in particular Eric Monnet, “L’indépendance des banques centrales a toujours été jugée nécessaire à leur crédibilité”, Le Monde (Online, in French), 25 October 2019, for a richer historical perspective.
6 See Borio (2019).
7 See “Interview: Mario Draghi declares victory in battle over the euro”, Financial Times Online, 30 September 2019.
8 See “Christine Lagarde urges ECB to find ‘healthy’ way of tolerating dissent”, Financial Times Online, 2 December 2019.
9 See “ECB’s Lagarde urges governments to boost public investment”, Financial Times Online, 22 November 2019.

Hayo, B. and P.-G. Méon (2013): “Behind closed doors: Revealing the ECB’s decision rule”, Journal of International Money and Finance, 37.

Jung, A. and S. Latsos (2015): “Do federal reserve bank presidents have a regional bias?”, European Journal of Political Economy, 40.