Will Contracts Survive the Pandemic?

The covid-19 pandemic and the resulting lockdown have impacted business enormously and in unprecedented ways, forcing corporate leaders to reset their priorities and, in some cases, switch from profitability to survival. As all this happened, legal advisors were urged to provide pragmatic solutions regarding their clients’ existing contracts. HEC Paris Professor of Law Matteo M. Winkler shares some options on which they may want to reflect upon. 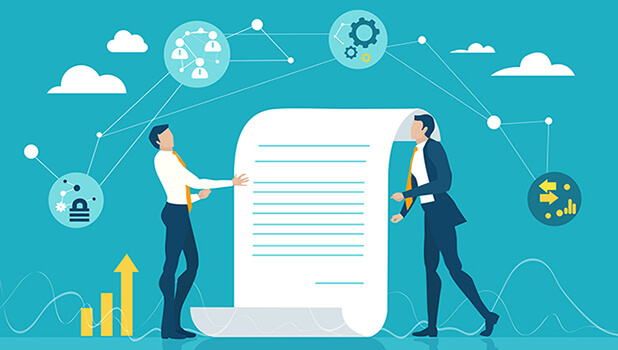 When covid-19 first hit Europe, several companies simply stopped their payments. Commercial stores being suddenly shut down by lockdown orders, they argued, they would soon fall short of cash, entitling them to claim hardship as a result. This was the stance taken by Adidas and H&M in Germany, when they announced they would freeze their stores’ rents during the lockdown, causing a public outrage. While these companies quickly backtracked, dozens of corporate clients are now enquiring their legal advisors concerning the right to stop paying their landlords. Simultaneously, legions of digitalized lawyers are suggesting tenants to seek to re-negotiate their fees under the new pandemic regime.

In an ideal world, re-negotiation would be always an option. But in the world we live in, re-negotiation – as negotiation in general – is subject to strong power dynamics and requires both sides to be ready to amend their contractual terms, which is not always the case. Some corporate tenants are indeed using the suspension of their monthly fees as a leverage to trigger re-negotiation, a point that is reflected by the experience with Adidas and H&M in Germany. Clearly, not all tenants are created equals.

The governmental relief packages that have been passed in the wake of covid-19 can impact the parties’ power dynamics substantially. The French government, for example, has suspended all contractual sanctions (liquidated damages and penal clauses) until the end of the coronavirus crisis, whereas the Italian one has freed defaulting parties from liability if the failure to perform is due to compliance with the containment measures. Measures like these can provide effective relief.

Most contracts actually contain appropriate force majeure and hardship clauses that help the parties face unexpected and insurmountable impediments such as a pandemic.

But in general, these packages mainly target consumers, workers and families and impinge on business transactions only marginally, reflecting the regulators’ confidence that the existing contractual regimes already provide for adequate answers. This might be at least partly true, as most contracts actually contain appropriate force majeure and hardship clauses that help the parties face unexpected and insurmountable impediments such as a pandemic, whereas when these clauses do not exist or are unclear or unenforceable, the parties may resort to a court or an arbitral tribunal that will settle their dispute fairly.

3. Governing law may not help

Absent a solid contractual framework, when performance has become impossible because of an unpredictable and insurmountable impediment, the affected party normally relies on force majeure or frustration law (in civil law and common law countries respectively). For example, when the US was hit by the Spanish Flu of 1918-1919 (which despite the name did not come from Spain), courts clearly affirmed that the pandemic excused the affected party from failure to perform.

However, absent a solid contractual regime, litigation would likely be a dead end for most claimants in countries where the legal standard for invoking contract frustration is extremely high. In this respect, in a famous ruling of 2004, the High Court of Hong Kong rejected the claim of a tenant whose building had been evacuated for ten days because of SARS. The court reasoned that ten days was insignificant compared to the two-year lease period. With the same logic, frustration could not be invoked for the two-month lockdown due to covid-19, making litigation not an option and obliging tenants to continue paying their fees.

The best shield against a pandemic is a well-drafted contract, especially in the common law where an extraordinary impediment is able to frustrate a contract in very limited circumstances. In times of covid-19, relying on appropriate force majeure and hardship clauses becomes vital.

Take the acquisition of the luxury brand Victoria’s Secret by Sycamore Partners from L Brands. The two companies signed a share purchase agreement (SPA) on February 20th, when covid-19 had already hit Europe and was riding the US toward the same fate. Since that date, Victoria’s Secret’s stores had to close due to the lockdown and the company’s value had plummeted. In cases like this, a typical SPA would contemplate material adverse change (MAC) clauses to allow the buyer to terminate the transaction. Accordingly, Sycamore expected to see such clauses as a hook to hang on for stepping out of a deal that had become extremely burdensome for it. To Sycamore’s surprise, however, this wasn’t the case: the SPA it had signed had regulated MAC by mentioning the epidemic not as a ground for termination but as an exception to it, that the buyer cannot invoke.

Clearly, a solid contractual governance of the pandemic would seal the parties’ fate when an outbreak actually occurs. Contract drafters and legal practitioners are also well-known for their creativity. It wouldn’t be surprising if in the next few months new model clauses will start circulating among practitioners as inspired by covid-19.

The hard truth about covid-19 is that we will be living with it for quite some time. Therefore, in elaborating the scenarios for the next few months, legal advisors need to consider that the solutions they propose for the short term might be required to last longer. This apparently contradicts the common understanding of containment measures as necessary but temporary.

In 1819, in an attempt to review the justifications of the quarantine laws in a time of trade expansion, the British House of Commons appointed a committee “to consider the validity of the doctrine of contagion in the plague”. After inquiring several medical experts, the committee concluded that quarantine laws were necessary, despite their costs, to prevent the spread of deadly diseases. To enhance this objective, however, such measures must also remain in force for a reasonably short period. As the prominent English scholar Joseph Chitty notably remarked in this regard, “it is only upon grounds of the most urgent expediency that the continuance of such regulations could be justified and allowed”.

This philosophy is still alive today. In early April this year, for example, the High Court of Bombay was asked to suspend a letter of credit on the alleged grounds that, by making the main contract impossible to perform, the containment measures passed by the Indian government had in fact terminated the transaction. The court refused to grant this request, reasoning that the containment measures do not frustrate the outstanding contracts because “the lockdown would be for a limited period”.

Business is supposed to go on as usual. Or maybe not.