From Chekhov to Ikigai: HEC Paris launches its master class in entrepreneurship at Station F

A full house on Monday, October 2, for "It’s never too late to start!” HEC Paris Executive Education’s first-ever master class at Station F, devoted to entrepreneurship. Hundreds more spectators followed the event, broadcast live on Facebook and YouTube. They all hoped to gain valuable insight from HEC Paris professors Etienne Krieger and Frédéric Iselin. The academics were joined by a panel of entrepreneurs, all graduates of the HEC Executive Education programs. 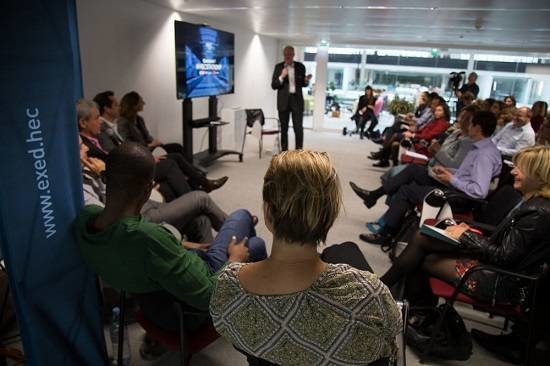 "Know your client," "measure the impact," "build on innovation," "prepare for a human adventure," "learn to dare”. These were the key entrepreneurial ideas expressed by the Executive Director of HEC Paris Executive Education, Inge Kerkloh-Devif, in conclusion of an hour-long master class skillfully led by Etienne Krieger, Scientific Director of the HEC Entrepreneurship Center.  In front of fifty start-uppers and specialists on the subject, Etienne Krieger did not hesitate to evoke the quest for the Ikigai, which he said would guide entrepreneurs in creating an alliance between four important areas: "What you love, what the world needs, what you can be paid for, and what you are good at.”

Etienne Krieger and Frédéric Iselin founded much of their analyses on the results of a detailed questionnaire they had circulated a few days before the master class. This aimed at drawing up the typical profile of today's start-uppers: their perceptions, the opportunities and risks they face and ways of building the Dream Team needed for their project. "An entrepreneur must be able to detect the latent desires of customers, they must dream with them,"  says Frédéric Iselin, before warning of pitfalls that must be avoided such as "substitutes " and the many "saboteurs " of start-ups. In response to the title of the master class, the two professors laid to rest perceptions that young people dominate the world of entrepreneurship.  According to their study, the average age for entrepreneurship is actually 35 years old, rising to 38 for innovative companies: “Perhaps it is linked to the mid-life crisis," suggested Etienne Krieger.

The five entrepreneurs at the round table which followed the presentations embody all of the qualities described above: a clever mixture of innovation, passion (a "key Chekhovian factor ,” according to Etienne Krieger) and self-denial. "The road is long and full of challenges,"  admitted Simone Hammer, president of Ecole Montessori 21. "It's a quest for meaning. There is always a tendency to look at the mountains we have to overcome, but we forget we have already scaled several slopes,”  insists the founder of four Montessori schools who, in her own quest, has combined social causes with unity.

Next to her, fellow entrepreneur Adama Touré, insists on the need to adapt solutions to local realities. “At TripAfrique ,” he said, ‘we have taken into account mobile payment to cover transport costs in Africa. This is because it is much more developed there than it is here in Europe.” The platform currently operates in 11 African countries, and Adama Touré is not discounting the possibility of exporting his business to Latin America and Asia further down the line.

Responding to a tangible need is also at the heart of the service offered by the Point Vision group created by two other entrepreneurs, François Pelen and Patrice Pouts. Just by observing current difficulties in making appointments with ophthalmologists in France propelled them towards creating a successful company that currently has an annual turnover of 50 million euros.

Being honest, knowing how to choose your associates according to their compatible skills, and not shying away from risks are the factors that helped Nathalie Gaveau to achieve remarkable success within PriceMinister and Shopcade. The HEC 1999 graduate did not hide her emotions at being at Station F, in the immediate vicinity of the HEC Paris incubator’s 188 young entrepreneurs (located at the start-up campus since June 2017) who are following in footsteps of  the panelists at this inaugural master class.

The event had been organized by the HEC Paris Executive Education marketing department. The next session is scheduled before the end of the year