In September 2020, HEC Paris recruited a record number of Ivorian students for its Grande Ecole program. This is a key element of its Africa Strategy 2015-2025 program which seeks to attract the academic excellence emerging from Sub-Saharan Africa. Despite the global health and economic crises that has engulfed much of the world, the recruits are showing exemplary determination as they aim to the economic and social emergence of their continent. 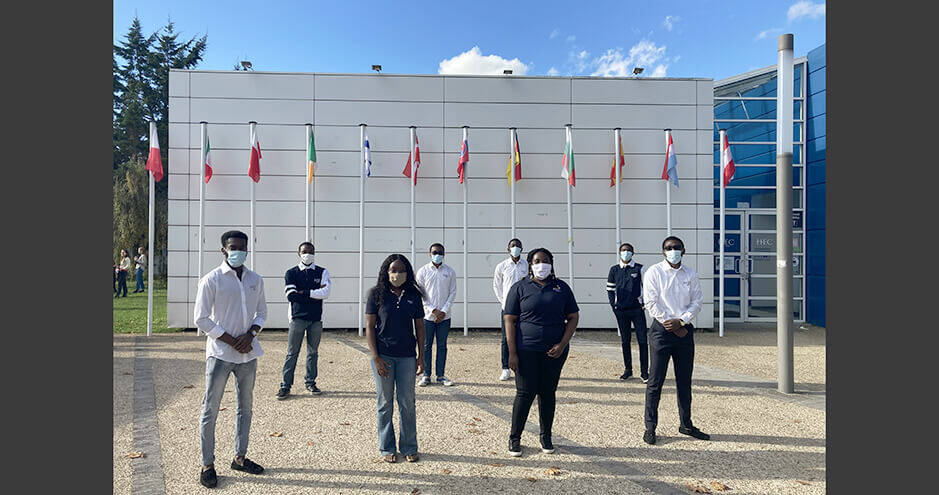 “It is through education that the daughter of a peasant can become a doctor, that the son of a mineworker can become the head of the mine, that a child of farm workers can become the president of a great nation.”

When the late Nelson Mandela wrote on the power of education, he could have been describing some of the eight beneficiaries of the equal opportunity program HEC has instigated in Côte d’Ivoire. “I grew up in Mampleu, a small village, where years were punctuated by sowing, working the soil, and harvesting,” confides Munkapé Bla who, like many of the eight students, is already an engineer. At the behest of HEC’s communications team, Munkapé and his fellow-west Africans have taken time off what they describe as “intense studies” to share their educational experiences. “Despite the hardship of the work and the stress of fluctuating and uncertain income, my parents have been able to provide my three brothers, three sisters, and me a future. Thanks to them, I was able to study at the best high school and university in my country.”

Munkapé is one of five students who graduated from HEC’s PACT Africa program, which seeks to attract the most gifted talents from Côte d’Ivoire’s top institutions into its Grande Ecole program (the three others successfully applied independently or benefited from the Join a School in France program). PACT is part of an HEC drive to double the representation of Sub-Saharan students amongst the school’s international population within five years. It is driven thanks to the heavy support of donors and the HEC Foundation. This year’s pilot project was masterminded by the HEC Abidjan office, in partnership with the Institut National Polytechnique Houphouët-Boigny (INP-HB). “But this isn’t just a question of philanthropy,” points out Abidjanaise Kiyalie Kemien, one of the few women in Côte d’Ivoire to graduate from INP-HB as a mining and geology technician. “People at HEC are realizing that there is an ever-growing number of talented minds in Africa, they want to further catalyze our potential. And, if we come out of our three years enriched, we’re more likely to return the favor and invest in the HEC community back home, recruiting new generations of West African students.”

However, no potential candidate should be under the illusion that reaching the Jouy campus is a cakewalk, note the eight students who battled against 150 other candidates to enter the school. “It was a slog in so many ways,” says Lucien Kouakou, “but worth every minute.” And Lucien should know: his humble beginnings go back to the village of Irateke, near the Ivorian capital Yamoussoukro, where the 2,000 inhabitants struggle without electricity or running water - and education remains an impossible luxury for many. “But I had the backing of the entire community from the beginning. Even when I got confirmation of a place at HEC in August, my village united to pay the initial down payment needed to confirm my place!”

HEC Paris is hoping the 2020 success of PACT Africa will galvanize sponsors to further back its project to create two other programs, one for East Africa, one for southern Africa. “Africa is growing,” affirms Joel N’Guessan. “Businesses are coming in increasing numbers to our continent. So, we need managers to build something together.” To realize this, Joel has mapped out his career very clearly: “At HEC, I plan to specialize in Strategic Management. I would then like to join a leading company like Bain & Company and become a manager, before moving on to McKinsey. After a total of 20 years working for these international firms, I plan to return to Côte d’Ivoire to found a strategy and management consulting firm devoted to developing SMEs. SMEs are the lungs of the Ivorian economy.”

Marie Allidjinou has her heart set on combining economy with societal impact in her homeland. Her commitment dates back to an internship in a Canadian gold mining company in northern Côte d’Ivoire. “I saw the negative consequences on the local communities that their policies are causing,” Marie explains. “By hiring local labor at five times the going salaries, they created a new class structure, divided people amongst themselves and encouraged an unhealthy hyper-consumerism amongst the lucky few. I think more intelligent policies of integration can avoid these traps.” The student is looking forward to integrating HEC’s MSc Sustainability and Social innovation designed to explore ways to transform both society and business into more sustainable practices.

Similarly, Habib Ouattara is aiming to be part of a revolution, firstly, to bring both drinking water to the 340 million Africans with no access to it; and, secondly to provide accommodation to the 500,000 Abidjanais deprived of decent housing. “As Chief Operating Officer, I intend to manage several projects in cross-cutting manner,” he notes, “because the infrastructure sector will be expanding to offset the different deficits.”

Dylan N’zi has already started a process of sustainability back home. He began a consultancy firm three years ago which channeled his expertise as an agricultural engineer into resolving entrepreneurial issues involving the Côte d’Ivoire’s agro-industrial sector. “It made me aware of the challenges our companies faced in competing against the major multinational firms which dominate the economy. I’m set on developing the skills at HEC to manage our businesses in order to better compete. But my agro-food business will aim at crossing the borders into the rest of Africa.”

The eight new arrivals have forged strong bonds of solidarity between themselves since reaching the Jouy campus in early September. Their integration into the very different teaching and living cultures at HEC Paris has been facilitated by the hard work of Gabriella Mazzini and Philippe Oster from the school’s International Department. They have also been guided by the experiences of their elders-by-one-year, three Ivorian students who survived the surrealistic experience of on-campus confinement earlier this year. “Even before we arrived, they shared important insights into the day-to-day realities here and also warned us that the teaching approach at HEC is very different to what we were used to at INP-HB,” says Jean Laurent Aïouo.  All the Ivorian students have come to terms with HEC’s emphasis on self-motivation and work preparation. “80% of the work is done in our preparation for classes,” notes Marie Allidjinou. “Once united with the professor, we discuss the readings, analysis and conclusions we’ve drawn up beforehand.” Much of this is done in small, cosmopolitan student groups. “I’ve been working with people from Lebanon and Tunisia, for example,” continues Marie. “It’s a vital element of being here, confronting our different cultures in the context of topics like strategic marketing. These exchanges can only comfort the knowledge imparted by HEC’s professors.”

HEC Paris will continue to work with the INP-HB Director General Koffi N’Guessan to expand its recruitment program for the Côte d’Ivoire’s top students. This program continues to be navigated by the HEC Paris office in Abidjan directed by Alexis John Ahyee. Despite the ongoing challenges of the health crisis, his team is optimistic that this year’s successful recruitment drive is only the beginning.