One year after its launch, the French startup Cuvée Privée, founded by 3 young alumnae entrepreneurs, Aurélie Berthon, Morgane Suquet and Marie Forget, graduates of HEC Paris and passionate about wine, completed its first fundraising campaign of one million euros. The company, which proposes to adopt a vine in a prestigious French vineyard and drink your own vintage, will be able to accelerate its growth and expand abroad. 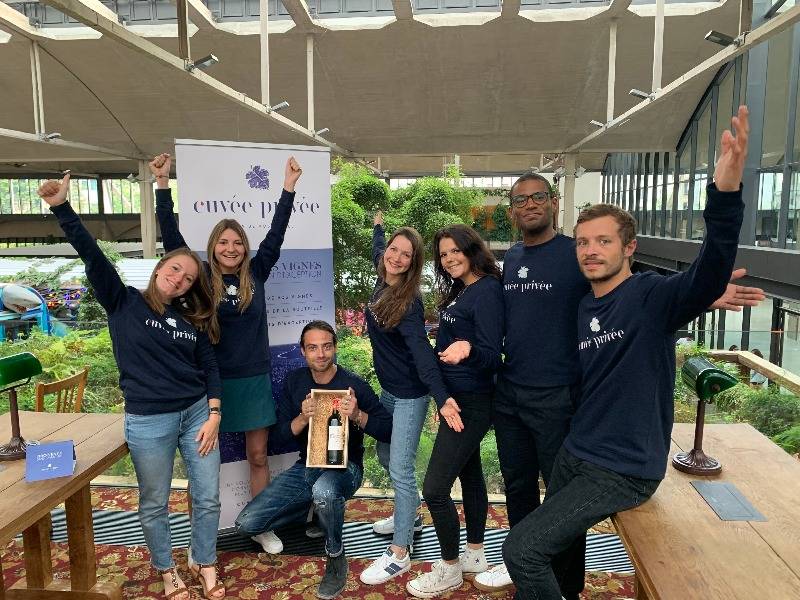 Since 2018, the young startup has brought wine lovers and winegrowers closer together through the adoption of a micro-parcel. From the very first bunches to the bottling, the adopters track the evolution of their vines during  vintage, thanks to the producer's story.
Cuvée Privée invites its adopters to the estate to meet the winegrower who takes care of their vines. At the end of the year, they receive their very own private cuvée in their name!
Bernard Neveu, Chief Sommelier of Bristol, is associated with the startup and tastes and validates each of the wines.  While it currently has 25 prestigious appellations on its site, Cuvée Privée intends to develop its network of partner winegrowers.

From HEC to Vineyards

Daughter of a winegrower, Marie, met Morgane and Aurélie during the HEC Entrepreneurs Master Program. Great wine lovers, they regularly visited the school's oenology club where they exchanged views with winegrowers on their work. They  quickly realized that by putting a face and a terroir behind a bottle, the wine takes on its full meaning. They then launched their own startup, now incubated at Station F.

Ambition and vision: to become a worldwide club of wine lovers who subscribe to vineyards

With more than 12,000 vines adopted and an average monthly growth of 30% since their launch, the three founders aged 24 to 25 years old, have the ambition to continue to develop on the French market and to conquer the world, starting with the United Kingdom.
« This is the first step in our efforts to quickly internationalize Cuvée Privée, starting with the United Kingdom, where we have already received several requests. The value of Cuvée Privée is all the stronger for a foreigner: to allow him to symbolically appropriate a small piece of France and to discover the behind-the scenes workings of French wine" explains Aurélie Berthon, co-founder of Cuvée Privée.

I was immediately seduced by the ambition and values of the Cuvée Privée project: to give meaning to the purchase of wine by revealing a profession and creating a link with the French terroir. Cuvée Privée is very rightly positioned at the top of the range and speaks to today's consumers by putting experience at the heart of the concept.  Coralie de Fontenay, former DG France of Cartier

I really liked the team from our first meeting and the concept of Cuvée Privée because, coming from the wine world, I think it is a great way to bring together end customers and winegrowers who only need more interaction and knowledge from both sides. We must show that the world of wine is an incredible, friendly, modern and very open world. Thibault Pontallier, former Ambassador of Château Margaux (International)

The funds will also be used to strengthen its team of 8,with the aim of doubling the number of employees by the end of 2020.

Learn how it works :
https://www.cuvee-privee.co.uk/