When HEC Paris professor, Olivier Sibony, brought out the short guide “Vous allez commettre une terrible erreur!” he could not imagine that it would have such a global impact. His exploration of nine predictable business decision-making traps and ways to avoid them received widespread plaudits and has been translated into several languages. The latest version, “You’re About to Make a Terrible Mistake” is described by the Financial Times as “providing reassurance and advice to all of us with choices to make” and “brilliant, fun and wise – a tremendous guide to sensible decision-making” by best-selling author Cass R. Sunstein. He shares his insights into the context in which the book comes out. 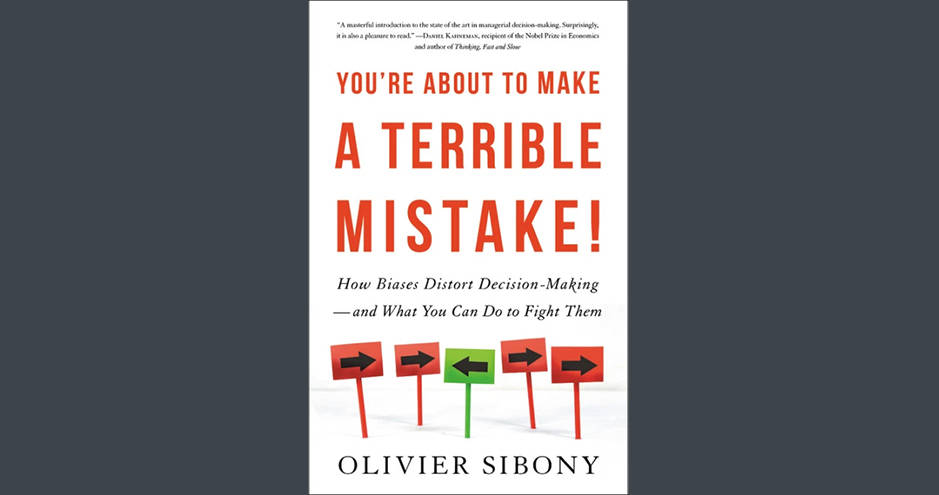 Olivier, this guide to cognitive bias in business provides a decision-making architecture for companies to avoid the frequent and predictable errors by managers that sometimes spell disaster for their firms. What are the costliest errors and how do you suggest remedying them?

The fundamental question I ask in my book is “Why do companies make strategical mistakes that are predictable and recurrent?” The fact that companies make mistakes is not surprising in itself – we have known that humans make mistakes for 2,000 years. What’s surprising is they make these mistakes over and over again. Take, for example, the fact that, by and large, companies overpay for acquisitions: for at least 40 years, hundreds of studies and meta-analyses have shown that the odds are they are going to overpay. You find this warning both in specialist reviews and popular business books. There are plenty of cautionary tales, for example, when Time Warner overpaid for AOL. And, still, people keep making that same mistake.

That’s one example. A second is companies which never seem to divest a losing business soon enough. Consider for example GM and its Saturn Corporation division, founded in the Eighties. The division lost money for 30 straight years before GM finally tried to divest it – and failed to find an acquirer: it was too late.

So, there’s a pattern: companies like these keep saying “We’re going to fix it, we have a new management or novel strategy”. They incur colossal losses, but they keep throwing good money after bad, instead of taking their losses. This is another well-known pattern called the escalation of commitment. And again, it’s an example of a mistake that companies make time and again.

So the question I tackle in the book is WHY? You can blame the CEOs, saying they’re stupid, but that’s simply not the case. What I offer is a view of how cognitive biases, combined with a number of organizational problems, create those recurring errors, and how we can tweak the organization to avoid them. That’s what I call decision architecture.

The original French book was written back in 2015. It has had a fantastic reception, for example figuring at N°2 in the best sales for the Amazon Strategy category last year. In the business world you know, have you seen applications of your guide?

It would be more than a little pretentious on my part if I said that the business world has changed as a result of my book! I have seen some individuals respond positively. In the classes I teach for Executive Education or EMBA courses, I’ve seen managers realize that their companies’ decision-making processes need changing. There have also been some company leaders who have called me for help, and they seem to have turned the corner.

The basic idea that any leader can take away is to accept that having good people in top posts (including yourself) is not enough to make good decisions. You don’t have to say “I’m a bad decision-maker” to say you need help in improving the quality of your decisions. And the way you are going to make better decisions is by giving some real thought to the process that’s going to help you make good decisions. And by having a team that will help you make them.

Those are the two conditions for a decision architecture: the team and the method. The team, and a form of collegiality, are required – because you can’t overcome your own biases by yourself, you need somebody to spot them, and conversely, you’re going to help others become aware of their biases when you prepare the decision as a team. And the decision process, because if you are going to hear several view-points from different people on the same decision, you must find a way to choose between them. Collegiality and process.

You wrote your book five years ago for a specific French audience. How much has this English version evolved for more global, English-speaking circles?

It’s very similar. The only modifications are the examples I use, the style, and some updates of course. But the recommendations remain the same. That’s because cognitive biases are a feature of human psychology. They’re universal. There are some cultural differences, but they are not big. The French hate when I say this, and the Americans are surprised, but the biases that trip us up are not that different (laughs). I don’t claim the same is true of all cultures, but I think American readers won’t necessarily realize the book they’re reading was originally written in France.

We are living an unprecedented economic crisis in modern peace time. What impact do these new realities have in terms of cognitive biases and decision-making?

No impact at all, in terms of our cognitive biases. It is our cognitive biases which are having an impact on how rationally, or irrationally, we are dealing with this crisis. My first thought is, why is it so difficult to deal rationally with this crisis? For instance, why did it take much longer than it should have, in most Western countries, to realize the severity of the threat? And why do we see so many people behave in ways that are inconsistent with the information we have about the disease, and often contradict their own beliefs? I think cognitive biases have a lot to do with this. I’ve given some talks on this since it all started and given a presentation for HEC Paris (see below) on how cognitive biases has affected our perception of the crisis.

The Positives from the Crisis

If there’s one tiny positive to be taken from the times we live it’s that it has contributed to the awareness of our own cognitive biases. People are asking why our responses have been so poor. When they ask this question and we offer explanations, people really hear it. They’re listening because they are being exposed to a situation where biases have created a problem that’s hurting them and the people around them.

A related point is that all the media look at the future as “unprecedented times of uncertainty”. True, but the idea of an uncertain future and unpredictability has always been true. What is new is not uncertainty – it’s that it’s impossible to escape that fact. Suddenly, executives cannot delude themselves into thinking that they can predict the future. In quiet times, we do it all the time, as an unspoken assumption: the future is predictable, and we predict it. We build plans, set targets, reward people who achieve them and punish those who fail to do so. None of this works if we admit the future is unpredictable.

This is due to a combination of several cognitive biases I won’t go into here. It’s a part of life. And it’s very tempting because, cognitively speaking, it’s exhausting to keep several futures in mind. We love to simplify our vision of the world by pretending we only have one future and we make only one plan. It’s a great simplifying device. We can make plans. We can hold people accountable.

But the crisis forces us to reconsider this mindset. We have to accept uncertainty in a way we didn’t before. Therefore, we have to change our planning and decision-making processes in a way we didn’t before. To change our target-setting mechanisms, too. And all these things are very consistent with decision architecture I’m trying to propose. We’re going to see leaders who have a lot more acceptance of these principles and a lot more humility in facing their inability to predict the future, at least for a while.

Then again, I’m one of those people who believe that this crisis will end, and we will revert to our usual ways. But I could be wrong… because the future is unpredictable (laughs).