DiversiTALKS: The Magnifying Impact of COVID-19 on Inequalities

How has the COVID-19 crisis and its economic and social consequences shifted the boundaries of gender in the workplace?  In its third debate of the year, the HEC DiversiTALKS conference series involved 10 professionals and academics to discuss online this crucial and sensitive question. This included keynote speaker Saba Danish, as well as Nicci Take, one of the FT’s top 100 Champions of Women in Business in the world. 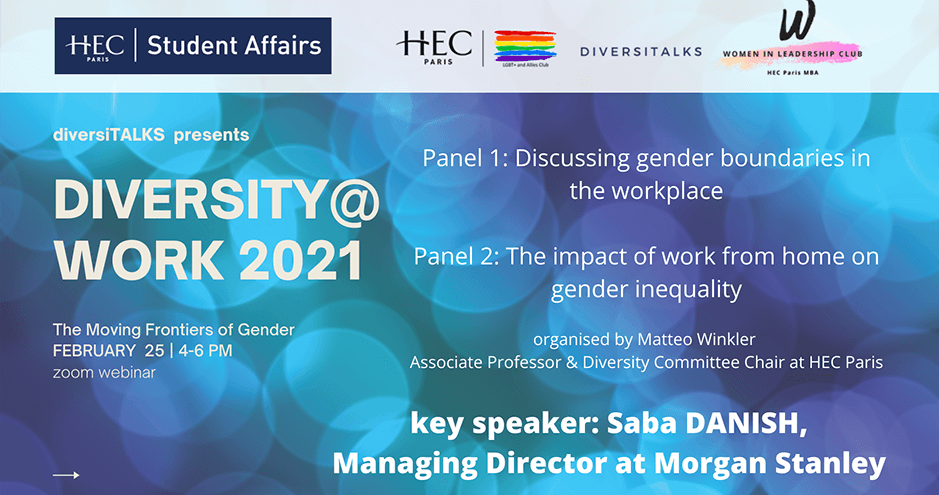 “What is most important for me is that I’ve got to a point where, hopefully, I provide some kind of a blueprint to demonstrate to the younger woman coming through business that you can be good at this job, you can have two kids and you can still shine.” Managing Director at Morgan Stanley, Saba Danish dazzled the 30-strong online audience in describing her iconoclastic path to a top managerial post in the investment bank. In doing so, the former Vogue reporter was merely putting into practice one of a number of lessons she learnt and shared with the audience: “I find it really hard to get women to back themselves,” she said. “And not be shy about self-publicizing their qualities. It took me years to get the hang of doing a good piece of business and then sending an email to 200 people to say how great I found I was: I’m British, I’m a woman and we don’t do that sort of thing!”

Danish set the tone for a frank two-and-a-half hour exchange with several dozen students and academics who remained faithful to the end. This 18th DiversiTALKS event explored what co-host Gabriel Saby called “the moving frontiers of gender”. The M1 student who presides the In&Out HEC Paris LGBT+ Club, added: “I think ‘frontier’ is an appropriate word now, with the pandemic changing all our boundaries. Boundaries between work and home have been destroyed. Those between genders and their inequalities are also shifting; the geographical boundaries have changed, allowing you to work from the other side of the world. So it’s a great opportunity to improve diversity, but we need to empower it because, if we don’t, inequalities will just increase. Let’s destroy bad boundaries and improve diversity.”

To catalyze these improvements, HEC Paris Professor and co-host Matteo Winkler suggested a holistic approach, which goes beyond the confines of the workspace. “Inequalities reach into our homes, especially as the health crisis has made the latter an extension of our workspaces. It’s important for those present to be aware of this. This event takes place in the spirit of understanding the challenges ahead and making connections between workplace corporations and the students.”

Panelist Adnane Meziane echoed the words of Winkler in a frank description of his personal experience of remote working for UBS Investment Bank where he is Executive Director. “I have my own space in this very room where I am speaking to you from, separated from the chaos at home with the children, etc. And it’s a luxury. Despite this, unfortunately, I did not spend enough time thinking about what it meant for my wife. It took a shocker, - her not feeling so well - for me to see we needed a fulltime helper so that our kids could be taken care of. Being a banker, I can’t take care of home affairs during the day, it’s impossible.”

“The reality,” Meziane pursued from his Paris house, “is that not enough of us male professionals have that consciousness and decide to act. We need to raise awareness, to be role models. I’m happy to talk about the mistakes I’ve made so that people try to avoid them.”

This honest and adaptability is at the core of what Nicci Take has coined “The Judo Mind Trick”.  For the past 22 years, Take has been what she calls “embedded” in Mercer, the UK’s largest pension provider. “I go and talk to people about their businesses or offers and then I figure out what their value proposition is, to increase the chances of winning the deal. I’ve done this, you know, over 10,000 times, I win 75-80% of the deals, I’m pretty good at it.”

The problems came, Take discovered, when the self-styled “corporate drag queen” went from a “Paul” to a “Nicci”.  “As a man, no one ever questioned my advice. But when you’re presenting as a woman, they don’t think you’ve got the right answer, so I was getting dragged into these conversations that are a waste of time.” To circumvent this resistance, Take came up with her judo technique: “When people push against me, instead of pushing back, I draw their ideas in and they end up lying on the floor looking at me. I use that weight against them, use that blindness and the inability to open their thoughts to a new pattern against them. They come around to my point of view, ending up being the biggest advocates of it. My advice, then, is don’t push-pull, don’t make statements, just draw ideas from people and you’ll end up being much more successful as a coach… and as a person.”

Meanwhile, lawyer and current PhD student at HEC Paris, Bianca Crivellini is asking if the professional male is becoming more female: “And could this be a good thing?” she wondered, centering her talk on men and women’s stereotypical traits, not on their sexuality.

“Being in control is something that is more traditionally tied to the male figure. And with these stereotypes come others, the main one being that women lack the qualities that are needed to succeed. Most of the barriers to women advancement are the consequences of gender stereotypes. So, my question is, if the issue is not women but their traits, what about men with those traits?” Crivellini interviewed around 50 young male managers of different nationalities, aged 25-40. Her ongoing research has provided room for guarded optimism: “There is less adherence to the Alpha male role in younger generations. The closer they are to 25 years old, the more comfortable they are tapping into their female side.” While traditional alpha males are becoming obsolete and women continue to be the target of negative stereotypes, Crivellini believes companies could leverage what she terms a new mentality currently being fostered by society: “The most effective leaders are not hegemonic leaders but leaders with a lot of communal qualities, which could pave the way for gender equality in the workplace. If the professional male is becoming female, then this could be a good thing, leading to the normalizing of communal traits and essentially removing barriers.”

Such hopes will face major challenges, according Professor Antonio Aloisi, a specialist in labor law at IE Madrid. He was a panelist in the second roundtable focusing on the impact of work from home on gender inequality. Aloisi cautioned on the “ever pervasive role of new technologies in workplaces and in society at large.” He stressed the socio-economic impact of the pandemic: “The last 12 months have shown a rise in inequalities at the workplace. We are witnessing a profound acceleration of digital technology. This is affecting work at home and has caused what I call a polarization between two very broad categories of workers: the essential workers, exposed to the risk of contagion and the service-based workers, who have been asked to migrate to different spaces, such as the living room in their apartments.” The former, said Aloisi, whilst being applauded from balconies as heroes during the pandemic, remain marginalized categories: “Women, less educated people, migrant workers.” The health crisis, concluded the academic, has exacerbated inequalities: “This pandemic has operated as a magnifying glass. With remote work, we are all involved in these extensive experiments, one of the biggest in our history.” Indeed, around 40% of employees in the European Union have started working remotely fulltime for the very first time.

Sobering thoughts in what has become something of a trademark feature of DiversiTALKS-sponsored roundtables. The next meeting is to be scheduled in the coming months and the theme will once again challenge perceptions and encourage dialogue from all horizons.