An enduring gesture of acknowledgement on the campus

On May 16 and 18, Valérie Taittinger Colloredo (H.94) and Pierre de Labouchere (H.76) gave their names to two areas on the campus. As highly-invested players in the Foundation and the School, our wish was to honor their commitment and thank them for their loyal support. 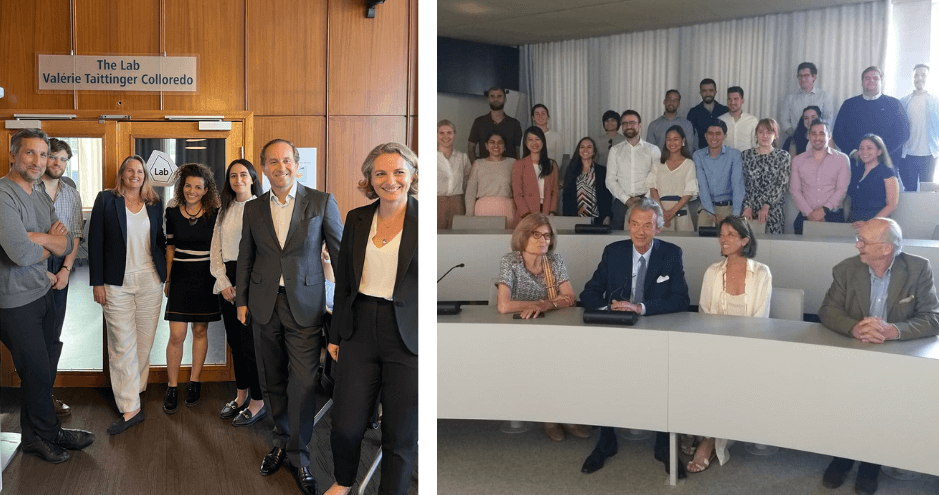 In addition to their generous financial support, Valérie Taittinger Colloredo (H.94) and Pierre de Labouchere (H.76) devote a great deal of their time to students in various programs and to the life of the School and the Foundation.

To date, 26 donors of the HEC Foundation have given their name to an amphitheater, a classroom, an auditorium or a hall, but for the first time at HEC, a woman has given her name to a space: The Lab Valérie Taittinger Colloredo, a room in the Learning Center (building U) which is designed to foster exchange and creativity.

Valérie Taittinger Colloredo (H.94) is highly engaged on behalf of HEC Paris and is a member of the Grand Donors’ Circle. She sits on the Foundation Administration Board and the International Advisory Board of HEC Paris. Valérie is also the first donor to have created a foundation hosted by the HEC Foundation, “Fondation 104”, which supports scholarship students during their studies. Since its creation in 2018, Fondation 104 has lent its support to some fifty students, some of which were present to celebrate this event on Monday, May 16.
Bertrand Cardi (H.96) who pledged his support for Fondation 104 by directing his donations towards the foundation, was also on campus to celebrate this inauguration, alongside Eloïc Peyrache, Dean of the School, and Delphine Colson (H.94), Executive Director of the HEC Foundation.

Pierre de Labouchere (H.76) was present on campus and surrounded by his family for the inauguration of the Pierre de Labouchere Amphitheater. Actively engaged for more than 10 years in the Foundation, he recently created a scholarship fund for HEC Paris students in the MBA program. Pierre is a highly active mentor and contributes to the running of the TEC On-Campus program.

During this inauguration, Eloïc Peyrache, Dean of the School, Andrea Masini, Deputy Dean and Head of MBA programs, Delphine Colson (H.94), Executive Director of the HEC Foundation and around thirty MBA students were present to express their gratitude and pay tribute to this engagement to HEC Paris.

During both inaugurations, which were followed by a cocktail event, the donors were delighted to rediscover photos and archive documents related to their student days at HEC Paris. Valérie was also treated to a surprise guest, her former teacher Marie Serna, Associate Professor in Law and Taxation.

We’d like to express our gratitude for these wonderful examples of generosity and engagement towards HEC Paris. Our thanks to them.