For Professor Jeremy Ghez, the April 24 French presidential elections are a litmus test for questions of sovereignty, global economic integration and E.U. political interdependence. The day after the second round, the co-Director of the Center for Geopolitics at HEC Paris delivered an interactive masterclass to a global audience, the first in a series launched by the business school. 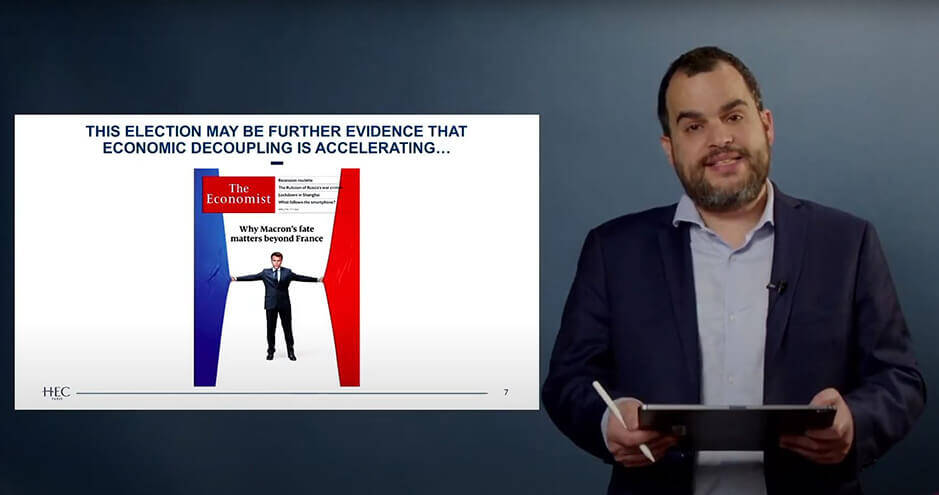 “Emmanuel Macron’s victory at the polls indicates that a dwindling majority of French voters continue to back the idea that the country needs to adapt to globalization. However, the record number of votes cast for the Rassemblement National party suggests there is a growing tendency in the opposite direction.” The author of the December 2021 white paper, “Economic Decoupling: Our New Reality?”, kickstarted his hour-long analysis of the French presidential vote with this summary of the previous day’s vote. Professor Jeremy Ghez mapped out the drivers of economic decoupling in the context of the election results and addressed some of the consequences for the world of business. “The Left/Right divide is probably dead here in France,” he said, “so what are the implications for business and globalization? Given that France holds the E.U. presidency until June, we have to examine the consequences for this entity in which the very ideal is based on interdependence and economic integration.”

Ghez placed the E.U. bloc within the context of the tensions between the United States and China. Their recent economic decoupling, he noted, could lead to very different standards and technologies being developed worldwide, in which distinct and separate supply chains will be built. And Europe has a card to play in this potential reconfiguration. “Interestingly, what used to be marginal, French-driven proposals are becoming mainstream: going local, increasing local investments, insisting on the prevalence of politics. Macron has been driving these and, with this electoral win, he has a certain momentum on his side. He is actively promoting a strategic autonomy for the E.U., not only in terms of the military, but also its energy sources, industrialization, and so on.” 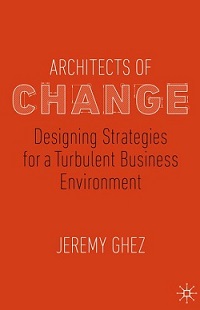 But the academic insisted, there are perils lurking. Almost three years ago, Ghez published ‘Architects of Change”. “In this book I was warning of a possible tsunami hitting the world economy. Well, it’s upon us, a global crisis accelerated by the COVID pandemic. So, now people are questioning and testing the limits of globalization. And there are plenty of models to reinvent, ideas to explore.”

The masterclass drew over 3,500 views in the first 48 hours of its posting and it was inevitable that audience questions for the geopolitical expert would come in thick and fast. Several were about Macron’s political clout on the international scene with this new five-year mandate. “Well, Emmanuel Macron is in a strange position,” he answered. “Overall, Europe was happy with his re-election. They sense that the French president has grown in stature and holds a senior position within the E.U. after five years in the post. There is indeed a French momentum. But there is also a growing degree of reticence coming from Eastern Europe where the populist threat is strong. There, nations are turning to the U.S. Macron has the means to bring them in but he has to show the audacious strategy he projected in his March 2 speech to the nation. A lot of Europeans are feeling isolated from globalization and they need to be brought in. Macron is very aware of this despondency, he will try to protect them, but it will come at a financial cost for everyone, and I’m not sure everyone is willing to pay it.”

Other questions rained in and moderator Anne Michaut, the Associate Dean for Education Track and Pedagogy at HEC did her best to squeeze as many into the masterclass. “Where is the COP 21 these days?” asked Amin. “Will the CAC 40 companies integrate the political shift?” enquired a viewer in Australia. “Are customers ready to accept price hikes in the drive for greener products?” wondered Xavier in Paris. “What about the European attitudes towards new energy sources?”, wondered another viewer.

In this new Masterclass Knowledge@HEC series, broadcast live on LinkedIn, Jeremy Ghez relished the opportunity to field such challenging questions and invited the audience to further the conversation online. This concept of interactive debates is born of the HEC academics’ explorations of new formats to answer the realities the COVID pandemic imposed. HEC Paris is exploring ways to prolong such exchanges later on in 2022 to bring the expertise of its professorial body to a global audience.


Return to the news list
Find all news Knowledge