International Podcast Day celebrates its sixth birthday on September 30 and HEC Paris will join in the celebrations by officially launching its academic-based podcast "Knowledge@HEC" with one vision : Expanding knowledge, Enhancing responsibility. 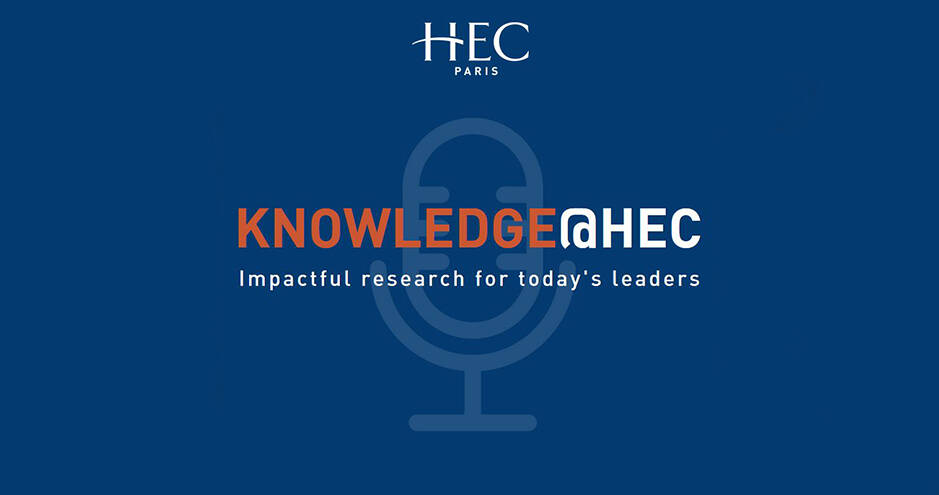 The figures speak for themselves: currently, over a quarter of Americans, 58% of South Koreans and 40% of Spaniards tune into a podcast every month; whilst one-eighth of the U.K. population do the same every week. So, it could be goodbye radio, hello podcasting, this marriage between Apple’s iPod and the transistor Marconi first experimented publicly in 1901. Given its exponential rise in popularity, this portmanteau (which was first coined as “podcasting” in 2004 by British reporter Ben Hammersley), has been fêted at the end of every September since 2015.

In preparation for a regular podcast feature, HEC’s Communication Department has already compiled over a dozen programs. Given the current context, they center on the reflections by the school’s academics over the widespread impact of the COVID-19 health and economic crisis. In total, that’s 14 podcasts of under 10 minutes on topics ranging from the role of CSR during a crisis; dealing with severe uncertainty; social media and its development under the social distancing era; and the disjointed response of European leaders to the health crisis.

Take, for example, Professor Anne-Sophie Chaxel. She shares her analysis of the impact of the crisis on our biases, both in political circles and the population at large. To avoid these, governments, she says, “should appoint a devil’s advocate to systematically take a different point-of-view” from those advocated by legislators and lobbyists. Professor Jean-Michel Gauthier, meanwhile, describes the catastrophic consequences for the oil and transport industries: “This is not 1998 or 2008,” he warns, “this is the worst blow these industries have ever experienced.” And, he adds: “It is being played out to the backdrop of a battle between the Saudis and Russians, leading to an increase of oil supplies in an already oversupplied market.” Perhaps, Gauthier suggests, this is a time to rethink our energy transition.

At the same time, Professor Georg Wernicke says the crisis could be a moment to rethink Corporate Social Responsibility policies within companies. “In previous crises, firms that don’t roll back their engagements in CSR have fared better than those who cut back, when the economy has recovered. All the signs are there to indicate it will be the same after the COVID-19 crisis.” Wernicke enumerates the positives that CSR brings: it helps build trust with stakeholders and customers, it increases employee loyalty and motivation; and it attracts investors. “So, I urge firms to abstain from talking but not walking their engagements.”

The most engaged podcasters so far have been Professors Tomasz Michalski and Hélène Löning, with two programs each. The former dissects France’s attempts to relaunch its economy and the microeconomic impact of the crisis. Whilst the latter provides hands-on advice to managers to create more durable business models, based on solid supply chains and treasuries.

The programs’ ingredients of innovation, enlightenment and informality are in the spirit of International Podcast Day and its founder Steve Lee. It was back in the summer of 2013 that Lee chanced on the idea of celebrating this very 21st century idea of attaching sound and video files in RSS feeds and making it a global success. Since then, as The Guardian put it in May 2020, “podcasts have taken off across the world.”

or go directly to Knowledge@HEC on :