On November 7, HEC Students for Sustainability welcomed guest speaker Darius Seiller for its first Climate Nights event. This series aims to foster an institution-wide commitment to environmental issues. A June 2018 alumnus, Darius Seiller is the co-founder and CEO of emerging sustainability consulting firm The SASI Co and thus embodies HEC Paris’ dedication to business ventures with a meaningful impact. 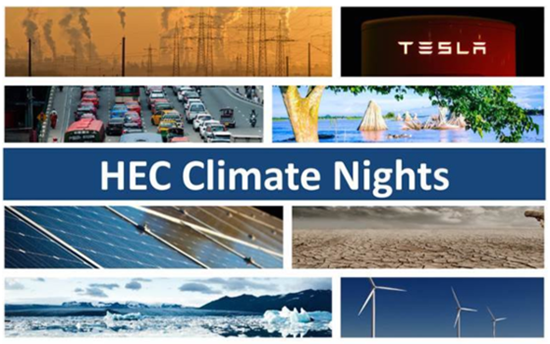 It was only a matter of time before HEC Students for Sustainability inaugurated its Climate Nights evenings. After all, the business school is at the heart of a recent student manifesto entitled “Wake-up Call on the Environment”. The movement involves over 20,000 students from leading French academic institutions who have pledged “to anticipate and incorporate social and environmental ambitions into [their] daily lives and jobs .”

They will have found a kindred spirit in Seiller, who wrote his HEC major project on “the future of photovoltaic & electricity storage in California ”. He was delighted to return to the school and take part in HEC Students for Sustainability’s first ever event: “The Climate Nights series is an important platform for  holding each other accountable and supporting each other  in our drive for conservation .” Speaking on the subject of “Climate Change in 2018: Where are we now?” , Seiller analyzed both the recent changes in our environment and the potential solutions for an increasingly harsh reality.

Seiller was quick to confirm that humankind’s previous – and, in some cases, ongoing - disregard for conservation has resulted in worldwide environmental chaos. “From this day on, we cannot emit more than we did yesterday,”  he explained. “16 of the 17 hottest years on record have occurred since the year 2001 .” And there have been life-threatening repercussions: the 2015 floods in Miami Beach, the droughts in India between 2002 and 2008, and the propagation of diseases such as Rift Valley Fever, Chikungunya and West Nile Virus, to name but a few. “Must we change our approach to the environment ?” Seiller asked. Based on this evidence, the answer is a resounding yes.

Furthermore, the wider public has been aware of these problems for some time now. Given that Seiller took inspiration from Al Gore’s 2006 film, An Inconvenient Truth , what efforts have been made to counteract climate change over the past twelve years? Going forward, will humanity see a sufficient decrease in its greenhouse gas emissions to make a difference? Whilst individual nations such as Finland, Slovenia and Latvia have made genuine strides towards carbon neutrality, the major international impetus now stems from the 2015 Paris Agreement, which aims to bring the global temperature average to within two degrees of pre-industrial levels. Despite Donald Trump’s decision to pull the US out of the agreement, the signatures of 195 UNFCCC members reflect an almost universal commitment to its goals. Whilst climate scientists such as James Hansen have expressed concern that the Paris Agreement is not stringent enough, Seiller admitted that he has always been “a hopeless optimist .” And given that each signatory must update its Nationally Determined Contribution (NDC) every five years, the Paris Agreement seems to present a viable long-term plan. This has led to praise from the likes of Michael Brune, executive director of the Sierra Club, who called the agreement ‘a turning point for humanity’. What remains to be seen is whether nations will meet their targets.

During the Q&A session that followed Seiller’s talk, one student claimed that “degrowth ” was our only hope of survival. “Instead of focusing on cleaning up the mess, we need to stop making it in the first place ,” he argued. Seiller called for a two-pronged approach, pointing to deforestation as a case in point. Whilst extensive replanting projects are underway in Latin America and China, whose forests will one day cover an area the size of Ireland, the loss of trees worldwide rose by 50% in 2016. Perhaps, Seiller suggested, the answer isn’t for us to stop growing completely, but to slow down our rate of growth whilst continuing to develop renewable energy sources.

Ultimately, HEC’s first Climate Night seemed to arouse optimism and pessimism in equal measure, and this tension arguably underpins conservation efforts worldwide. Despite the facts and figures detailing some countries’ exorbitant coal consumption or the depletion of glaciers in Greenland, this event was fueled by the hope that solutions may yet be in reach. And so, rather than feeding into a sense of helplessness, a more acute awareness of our bleak future ought to galvanize greater commitment to tackling climate change.

With this in mind, HEC Students for Sustainability hosted its second event on November 26. Applications are now open for the “Drawdown Challenge”, an international climate change competition focused on food waste, agriculture and education in the environmental domain.