HEC Paris beat out 150 worldwide competitors at the prestigious Global Case Competiton at Harvard this year, in an intense three-week case study. 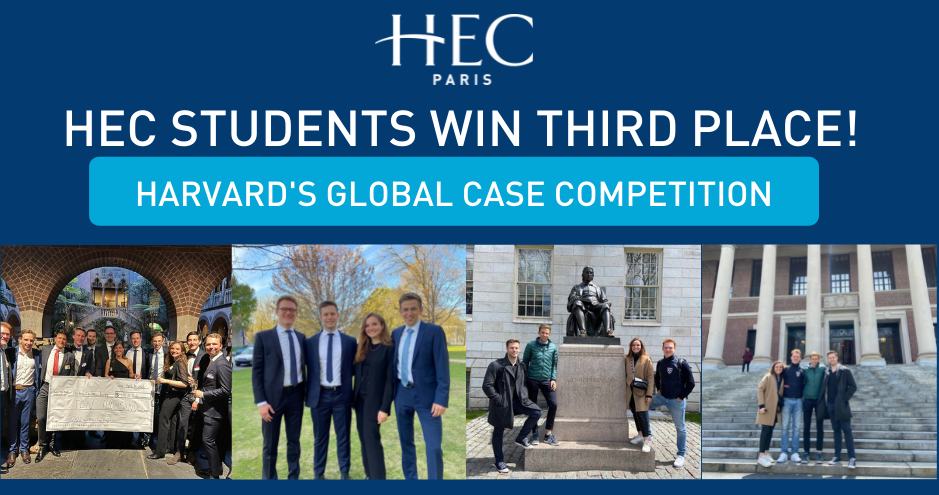 Four outstanding HEC Paris students have recently won 3rd place in the Global Case Competition at Harvard with their project, “Mind the GAAP".

“I found out about the Global Case Competition at Harvard about it a year ago, before applying to HEC Paris,” said Golsteyn. She wasted no time in hand-picking other bright and motivated M1 International students, (Charlène Golsteyn, Lukas Rüth, Pietro Toso, Marc Adrian) from her class to form the team for HEC Paris. The team registered in December, and were ready to start the three-week-long intense competition in February.

Using real companies and real data, each team were sent a case and are given only three weeks to come up with an investment decision to present to a jury.  “It was an M&A deal, with lots of finance and strategy,” says Golsteyn.

Each year, Harvard hosts the Global Case Competition, in which 150 teams from the world’s top schools participate in the competition. Of all the entrants, only the top 10 are chosen as finalists to present their ideas on video. From there, they enter into a life Q&A with a live panel of international judges. The grand prize winners go home with a $10,000 grand prize.

At the case submission deadline, HEC Paris' team was ready with an 80-slide deck. Once they were announced among the 10 finalists, the team quickly moved into video production in front of a green screen, with HEC’s Media Team.

As finalists, the team traveled to Boston, where they got a tour of Harvard's campus.  As third place winners, each member won a mini-MBA from Harvard and were enrolled in free classes over the summer.

“Pretty intense, but nice, since we learned a lot. We couldn’t have done it without our mentors and the support of HEC Paris, who really moved quickly and understood the value of this.”

And for the future? Golsteyn has admitted that she’s caught the bug for M&A, and is looking forward to starting work for Goldman Sacs in the fall.

“I was learning as I was working on this project. It was an amazing experience.”