Worldwide, leaders are facing more uncertainty and complexity than ever. Crucial to addressing these 21st century challenges are global proposals for greater diversity and inclusiveness at leadership level. Five panelists from different generations and horizons came together to discuss key notions to empower present and future generations of leadership teams, with a focus on women leaders. The April 19 web-and-live debate organized by HEC Paris Innovation & Entrepreneurship Center explored ways to transform the narrative on gender leadership, shared with a local and global audience. 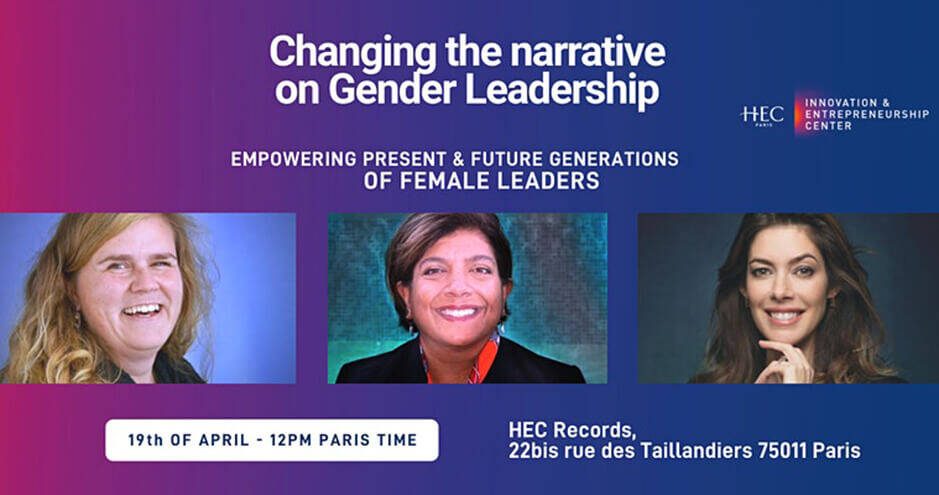 “Diversity is being invited to a party; inclusion is being invited to dance.” By quoting the American cultural innovator Vernā Myers, MBA student Thandiwe Mkhetshane set the mood for a highly engaging exchange seeking to modernize the age-old challenges of gender leadership. HEC Associate Professor Shaheena Janjuha-Jivraj immediately latched onto the metaphor, asking leaders to go beyond tolerating diversity in order to actually celebrate it: “It’s even more important for those party-goers to ask you to show them your dance!”

Against all statistical logic, resistance to ushering women into the leadership dance remains strong to this day. One study reveals that, while over half of the US workforce is female, only a third of its senior leadership positions are filled by women. And yet, some studies suggest their implication in leadership decisions boost economic performance significantly, for example in investment performance. For her part, the Managing Director of the Women’s Forum, Audrey Tcherkoff, noted the many challenges that remain: “Inequalities haven’t been built overnight and they won’t be cured overnight, either. Sure, there has been progress over the last decades – we see more girls in school, fewer are forced into early marriage, more women are in positions of leadership and laws are advancing gender leadership,” said the President of the Institute of Positive Economy. “But too many discriminatory laws and social norms remain. Women are still underrepresented at all levels of political leadership. And legal protections against violence and rape are being rolled back in certain countries.”

In front of a full-house audience at the new HEC Records venue off of Bastille, the panelists did not hesitate to evoke the inequalities that continue to prey leadership. MBA student Dawson Jope has already traveled far and wide and contributed his global experience: “The narrative on leadership remains similar despite the different geographic regions,” said the American strategy professional who has worked for years in countries as diverse as Rwanda, Iraqi Kurdistan and Sierra Leone. “You still find the top circles are dominated by older males. To change the narrative, there needs a power shift, as well as leaders with a degree of humility and honesty about their own vulnerabilities. These qualities allow those in power to open up the discussion.” This, Jope believed, would also create spaces for women leaders to propose their own, home-cooked, decisions. The Californian evoked a book whose title was an agenda in itself: “The Master’s Tools Will Not Dismantle the Master’s House”, by Audre Lorde who devoted her life to addressing injustices in her native New York.

Dr Marcelle Laliberté said she is a strong advocate of student engagement of the kind she has witnessed in her previous roles and her classes at HEC. The Chief Diversity, Equity & Inclusion Officer at the business school described these experiences [around student engagement] as stepping stones to leadership: “These future leaders are pivotal in bridging the potential challenges between the individual and the organization. Students are at a crossroads on how to address collaboration, giving space for people to ask for help. Later in their careers, these positive signals encourage engagement within businesses.” Laliberté’s 25 years of experience in managerial roles and her focus on higher education have allowed her to explore, among other issues, the ways university leadership shapes its response to national reforms and governance structures in Europe. “The fact that there have been great improvements in diversity in education is not necessarily reflected further down the line as initiatives around diversity take time and oblige us to rethink how stereotypes and beliefs may be impacting businesses and consequences still unforeseen. For example, the burden on women in terms of care is still not sufficiently integrated into the workplace. So, we have to rethink our approach, challenge the status quo and shift both internally and externally.”

Shaheena Janjuha-Jivraj concurred: “Education is a catalyst of social change, clearly. Higher education establishments need to keep working with companies to create cultures that attract, retain and promote female leaders. Leadership is cultivated and we must teach and socialize our students to be more open and welcoming of diverse viewpoints and experiences,” said the co-author of “Futureproof Your Career”. “We mustn’t hide behind the label of impostor syndrome whereby individuals doubt their talents or accomplishments and fear being denounced as a fraud. If we understand that this is about building our self-efficacy and taking up opportunities for stretch, then we recognize impostor syndrome as a label but not a barrier for progression. We need to stretch and stretch so far out of our comfort zones. This also allows us to make mistakes and to fail, which makes us more resilient for leadership.” Both she and Audrey Tcherkoff lauded the benefits of role models. “Yes, they are key,” said the latter. “As more and more female students see women running companies, more and more will get used to it and say: ‘Yes, it is possible.’”

The author of a manual dissecting ways for women to be at the heart of the global post-COVID recovery  then drew attention to nations where man-woman leadership parity is closest: “Countries that have adopted coercive measures have substantially narrowed the gender gap. We used a barometer to test people’s willingness to see strong measures implemented,  including supporting the imposition of big fines on companies with a gender pay gap. To our surprise, 84% said they would support such measures.” And Tcherkoff then entertained the audience with an anecdote which reflected the long path that remains: “My six-year-old daughter shared with me her adulation for the French astronaut Thomas Pesquet. When I naturally asked her if she’d like to become an astronaut, she immediately shot back: ‘But I can’t, mom, I’m a girl…”

The impact of Thandiwe Mkhetshane’s mother on her life choices was brought to the fore when the South African described her role models in building her career. This bridges the fashion industry, chartered accountancy and, now, her studies at HEC. “My mother embodied a form of rebelliousness, a strength that always challenged the status quo. It helped me question trends and not blindly follow the majority.” Mkhetshane’s professional path has also led her to challenge the concept of inclusion. “We need to dig deeper. Inclusion cannot be symbolic; it has to include women in all strategic decisions. Empowering is one thing, giving us the means to achieve our goals is another.” The entrepreneur who founded Royalty Scenery four years ago, insisted on the need for collective efforts: “Maintaining motivation is tough. To keep it, we need to be bigger than the individual, we must work for the broader community. And, as you step up the ladder, you must make sure you are bringing up the others with you.”

At the conclusion, all the panelists agreed with the 29-year-old’s closing remarks. The student from Johannesburg insisted that “inclusion” is broader than gender or the color of one’s skin. “As Marcelle Laliberté told us in an on-campus exchange, if you can include the most under-represented person in the room, then you’re doing just a good job.”