The 2022-2023 cohort of the HEC Lead Campus program is being finalized as we go to print, with a renewed commitment to more African women and greater diversity amongst the participants. This unique Executive certificate is jointly run by HEC Paris, the French AFD development agency and the universities of Cape Town and Mohammed VI. As the new class prepares for its opening session in October, we look back at the 2021-22 experience which reached a climax in July. 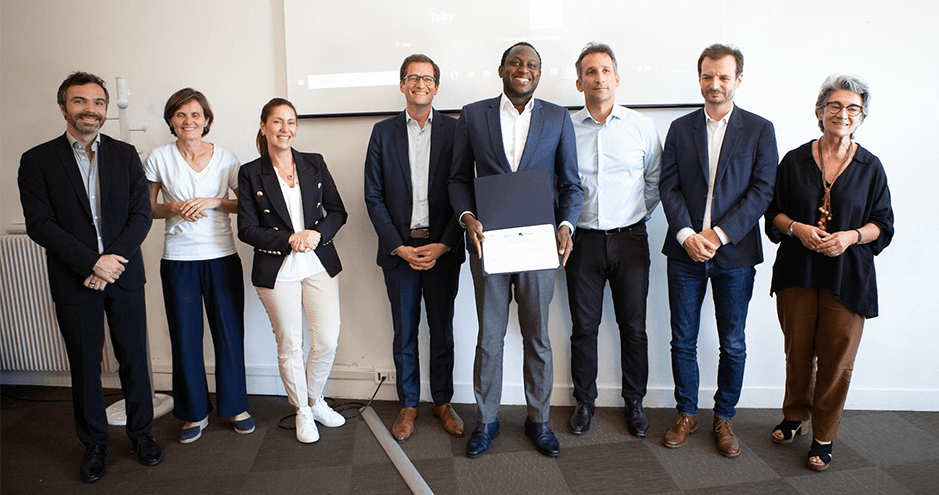 “What a week!” exclaimed Lead Campus co-organizers Christelle Bitouzet and Benedicte Faivre-Tavignot. “What a year!” piped back the 29 participants. Their tired but broad smiles reflected the intensity of a final week back in June. The curtain fell on an experience that is likely to accompany them for the rest of their lives. Hailing from 15 different countries on the African continent, they had met over the year in Morocco, South Africa, Côte d’Ivoire and France in intense, hands-on weeks designed to further their entrepreneurial projects with an impact. Strong numbers from Namibia, Morocco and Angola, did not overshadow the inter-regional flavor from the entire continent. “This program is vital,” exclaimed HEC Dean Eloïc Peyrache during the closing ceremony. “It has all the hallmarks of our school’s engagement to Africa and the projects you’ve molded reflect that, as responsible leaders, you can act with impact.” The applause was both spontaneous and heartfelt, reflecting a camaraderie that had been forged through intense co-development sessions, experiential experiences and deeper reflective exchanges spread over the year. The active pedagogy that Bitouzet and Faivre-Tavignot, and the entire HEC team has instilled since 2021 had bound the participants with a strong sense of experience sharing, in situ observation and co-development sequences.

“Those were nine challenging months,” admitted Youmanli Faboumy with a relieved smile. The Beninese operation manager had devoted those months to answering sustainability challenges in emerging countries through education. “There were so many take-aways from Lead Campus but the highlights have to be the exchanges with local entrepreneurs who inspired me to devote myself to social impact initiatives in my homeland.” This led to Faboumy’s ambitious project entitled “Transmission of Knowledge by the Youth for the Youth”. “I’ve given up my career in London in digital advertising to return home and help bridge this huge educational divide,” she explained during her 30-minute exposé which closed the final session. Speaking before a three-person jury, the former dancing coach brilliantly exposed how she aims at providing access to education for the 42% of Beninese workers who have no academic diplomas. “3.5 million workers use Internet; half of our entrepreneurs want online education. We can help provide access, especially to the 23%  women who had to leave school before graduating. They can spearhead an educational revolution in Benin” Whilst applauding the quality of the project, jury member Emma France pointed out the need for more data on Faboumy’s potential customer base. “The need is clearly there, but you must answer the challenges of analytics tools, the client profile you are targeting and the rural/urban divide.” 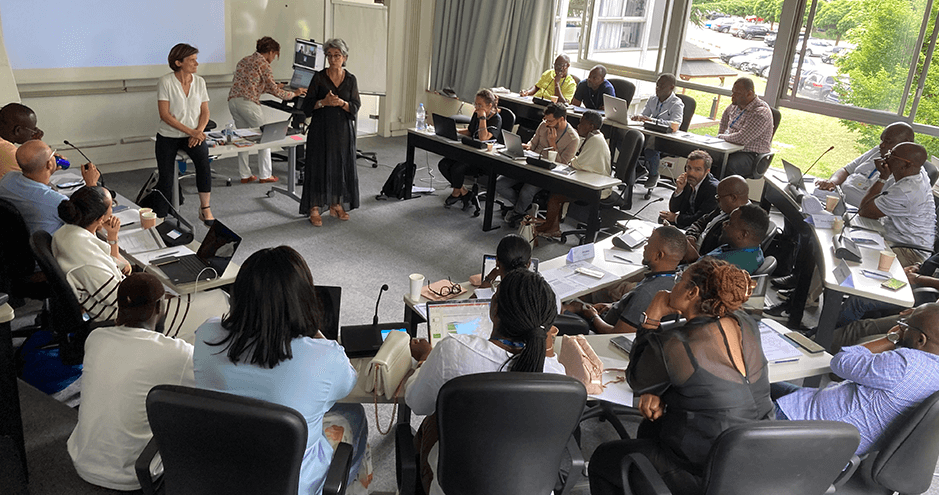 “Lead Campus has been life changing for me.” Pablo Andres Roure did not mince words in looking back at his yearlong experience. Prior to the executive program, the Argentinian had worked on delivering basic services to citizens of Johannesburg, South Africa. This involved bringing together the private and public sectors to develop the capacities of civil society to eradicate poverty and create employment. “Now, thanks to what I’ve learnt this past year, I want to better align processes and procedures in development organizations,” he explained.

However, Roure will be reorientating this drive in a completely new field, that of South African contemporary visual arts. His aim in a nutshell? “I’m going to make this marketplace more accessible to a regional and global market, in order to empower and promote artwork and raise awareness about current development issues. I’ve called my project “I’M ART” and my aim is to democratize access to art and to increase its impact across society. Hopefully this will maximize impact and achieve greater accountability towards key stakeholders.” Roure’s “I’M ART” project aims at a sector which accounts for 1 million jobs and 6% of the country’s total workforce. South Africa’s creative artworks industry surged by almost 50% in 2021 and the COVID pandemic actually served as a further catalyst as digitalization increased and online sales accounted for a fifth of the art market’s sales. In the long term, Roure aims to broaden his field of action to a dozen countries in sub-Saharan Africa. His projects was one of five retained by the jury as most promising among the 29 drawn up during the second Lead Campus.

Claire Yabo’s project “Ecole Le Petit Poucet” was another of the five ventures that most seduced the jury. The Beninese has taken a long circuitous journey before returning to roots that had been planted by her grandparents in the small West African nation. “My grandad was what was called a ‘hussard noir de la République’. This was the nickname given to teachers who incarnated the school ethics voted in by Jules Ferry during France’s Third Republic,” she said. “They represented a certain moral authority with new civic and intellectual priorities. My father went on to found several private schools on these principles and they advanced the educational quality in West Africa. Now, I’m hoping that my Petit Poucet initiative will help build the schools my country deserves. It will be a kind of teaching laboratory offering a unique and affordable school value proposition.” Claire Yabo started her venture, Ehuzu (meaning “revolution” in her native Fon) in August 2021. “This entrepreneurial path was a very lonely one, I have to admit. That’s why Lead Campus has been so priceless. We’ve really built a community here. Together, we’ve learnt the complexities of this field, and been given the structures to navigate it.”

For this edupreneur, the Lead Campus breakthrough moment occurred in Abidjan, Côte d’Ivoire. “We were shown a remarkable Montessori school and I met its initiator, a woman called Sava Adico. She built up her structure in the space of four-five years and proved to me it is possible, even with small seed money.” Then there was the powerful session on leadership at the University of Cape Town. “Fundamental questions about our purpose we drilled into us by a brilliant group of South African entrepreneurs. It was exhausting and exhilarating at the same time.” 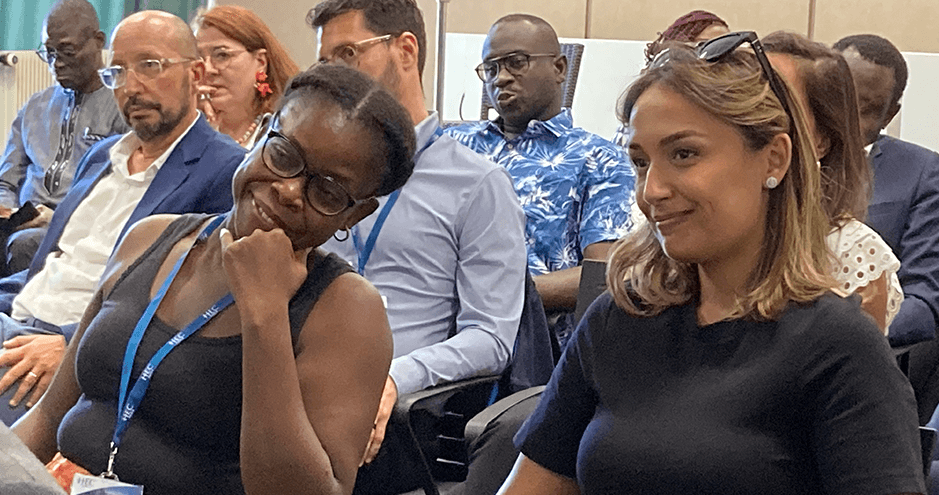 Purposeful leadership was what drove Micaela Monteiro to move beyond a dynamic career as marketing coordinator and coach in her native Angola. This includes her current post as brand and communication coordinator at Angola Cables. “But I saw there are deeper issues I wanted to address as a woman and a mother. I’ve seen the huge difference between bearing children and being a mum, especially in Africa. And what really struck me after our first weeklong session in Morocco was the urgent need to improve women hygiene standards, especially during their periods.” Monteiro and fellow-Angolan Ohana Lima presented a joint proposal to reduce the negative impact substandard hygiene can have, “and thus have women reclaim their bodies!”

For the dynamic entrepreneur, Lead Campus was “a five-year shortcut.” “We learnt so much from each other: how to connect, the synergies we’ll be able to exploit, how to pinpoint the real issues behind Africa’s challenges.” Monteiro has submitted her hygiene project to four different NGOs for approval and backing. “If the funds arrive, I’m going in fulltime,” she said emphatically. 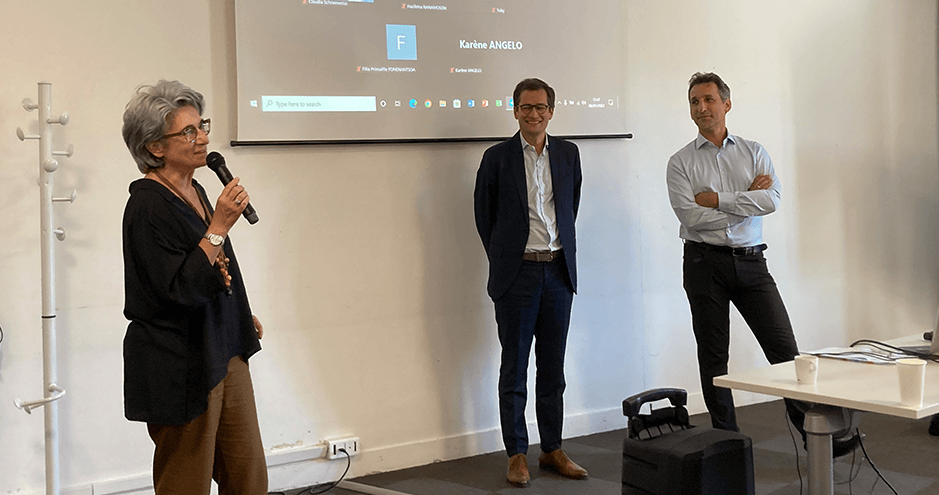 For Christelle Bitouzet, such commitment is music to her ears. The HEC Affiliate Professor believes the Angolan reflects a general desire by the participants to become African leaders contributing meaningfully to the local and continental stakes at all levels. “The participants these past two years shared a strong altruistic approach to fundamental issues in the fields of health, education and the arts. I think this is partly thanks to our commitment to experiential exchanges, an immersion that relativizes all the theoretical economic models they’ve known in the past.” For Benedicte Faivre-Tavignot, the students’ wholehearted commitment is fully coherent with the main objectives of the program: “We aim to raise awareness of today’s major challenges in Africa," said the Affiliate Professor of Strategy and Executive Director of the Society and Organizations Institute (S&O). Faivre-Tavignot  underlined the necessity for the participants to be aware of their responsibities in creating new economic models, thus proposing disruptive solutions to today’s pressing needs. And she added: “You might ask yourself what a French Institution like HEC can bring to African actors. Well, I think that what we bring is our long experience in executive education (remember, we are currently ranked world N°1 by the F.T.). On top of this, HEC offers its deep expertise in sustainability, developed over 15 years by S&O. Finally, the participants are inspired by the African leaders they meet during the program’s field trips and they, in turn, inspire us, Europeans, in a ‘reverse innovation’ sort of way.” 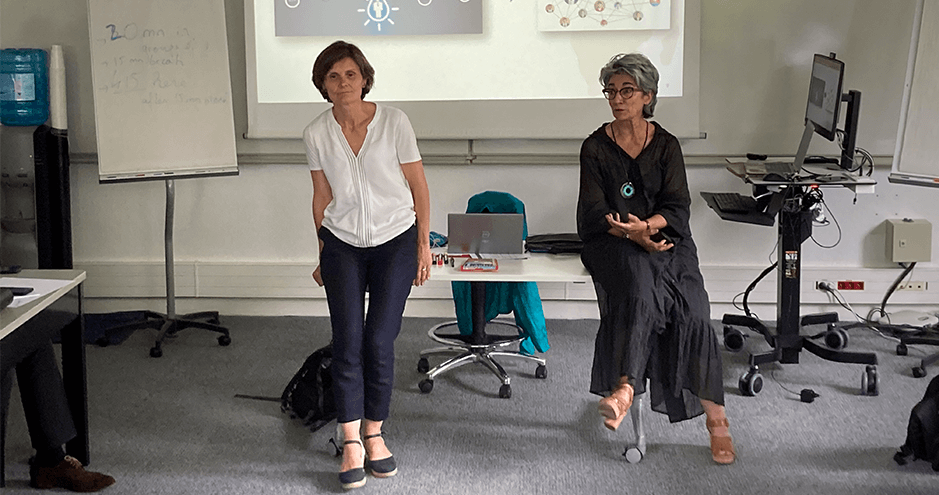 Leading into the Future

Now, Bitouzet and Faivre-Tavignot are planning further adjustments for the third cohort kicking off in October. “For example, in Morocco, we’ll be reinforcing our analysis of climate change and emigration,” continues Bitouzet. “In Côte d’Ivoire there will be an emphasis on the oil industry; and in South Africa, there will be a reinforcement of classes on leadership transformation and cultural heritage. We’ll also be integrating new business models where food security and the informal sector are explored. Finally, we’ll be opening up further to East Africa and finding inspirational women leaders. So, a rich program ahead!”

Such a fertile perspective did not escape the attention of Dr. Camille Meyer, Scientific Director at Cape Town University. Meyer had flown in specially for the closing week at the Jouy-en-Josas campus and was full of praise for the overall quality of the projects presented by the first two cohorts. “Collectively, you are spreading the seeds in our minds with these groundbreaking initiatives,” he told those assembled for the certification ceremony. “In a word, you are taking on the leadership responsibility and bringing it back to your own community. For me, this is transformational leadership and we at Cape Town are only too happy to reinforce our cooperation for the cohorts following in your footsteps.”