Alexandre Mars is a serial entrepreneur, renowned philanthropist, and author. We’re celebrating his career of successful tech ventures and his quest to redesign the philanthropic landscape as part of the 30-year celebration of our MSc Strategic Management program, from which Alexandre graduated in 1999. 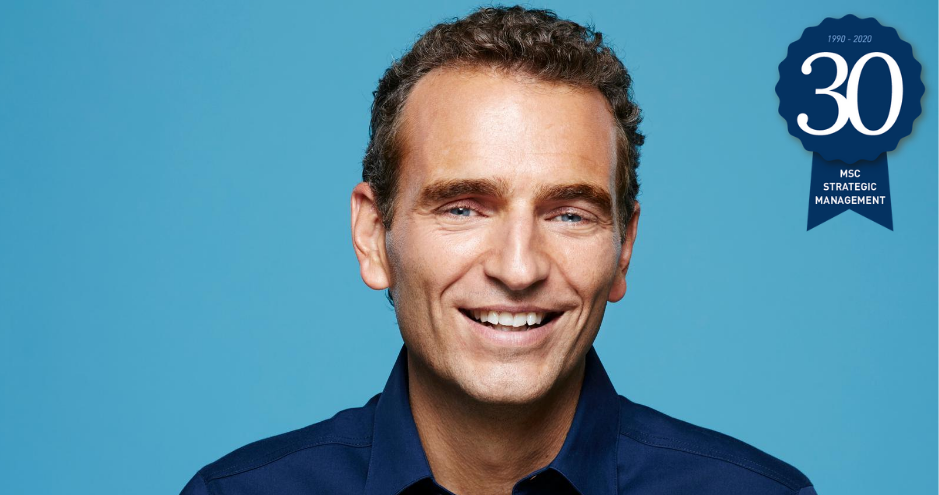 Named among Town & Country’s “Top 50 Philanthropists of The Year” in 2019 and featured among “the 50 most influential French people” by Vanity Fair in 2018, you may have heard his name before. From creating his first start-up at 17 and having since made his own fortune in technology and venture capital, Alexandre has never lost sight of his mission: to leverage his success, time and expertise to do good and help others. Enter Epic: the non-profit start-up he created to fight social childhood and youth injustice by removing barriers to giving through increased transparency and innovative solutions.

As an author, podcast host, and frequent radio and TV guest, he’s devoted to sharing his message with others, including the HEC Paris community: “as an alumnus, I always enjoy meeting other HEC students to share my personal experience, discuss their projects and witness their ever-growing commitment to social impact" says Alexandre.

Spurred on by the early ambition to first provide for his family, and then for others in need, Alexandre discovered his talent at a young age. He started his first business, organizing concerts at his high school, at just 17. Driven by altruism, money was never Alexandre’s end goal, but rather a means of achieving his mission to fight social injustice.

As he grew up, so did his business ideas. In the late 90’s, he began launching companies in the tech space: from creating one of the first web agencies in France, to selling his mobile marketing agency Phonevalley to Publicis Groupe in 2007 and social media management company ScrOOn to BlackBerry in 2013, he created a veritable legacy for himself in the digital sphere.

He has since applied his entrepreneurial and tech start-up wisdom to the venture capital space, launching blisce/ in 2013: a growth venture capital fund that helps entrepreneurs build mission-driven global consumer brands and tech companies. The fund has invested in many leading companies, including Spotify, Pinterest, BlaBlaCar, Bird, Brut., Headspace, and Harry’s.

After breakout success followed by breakout success, Alexandre was able to circle back to his ultimate goal: to use his money and influence to help others. In 2014, after an in-depth market study into the philanthropic sector, Epic was born.

From his research and meetings with industry actors, Alexandre observed three main barriers to charitable giving: a lack of knowledge (about who to give to), a lack of trust (that the funds would be put to good use), and a lack of time (to do the necessary research). Epic’s mission is to use innovative solutions to overcome these obstacles, connect would-be donors with exceptional social organizations and – ultimately – make giving a habitual and joyful act.

How? Epic has evaluated thousands of charities around the world engaged in the fight against childhood and youth inequality in order to identify the most effective and impactful organizations. The goal behind this highly-selective process is to inspire confidence when giving and ensure traceability. 100% of all donations go directly to the selected charities and donors can follow the impact of their support through detailed status reports and tools, such as a VR app. There are currently 26 organizations in the Epic portfolio worldwide.

Alexandre has a published a variety of creative works over the years, including the book “La Révolution du Partage” (Flammarion) – in English, “Giving: Purpose is the New Currency (HarperOne/HarperCollins) – and his podcast “Contre Toute Attente” (“Against all odds”). This year, he’s added to his portfolio, releasing his new book “OSE ! Tout le monde peut devenir entrepreneur” (Flammarion) – in English, “Make your move: anyone can be an entrepreneur”. In this practical guide, Alexandre draws on his own experience and interviews dozens of accomplished entrepreneurs to share concrete insights on key topics like the importance of failure, how to attract investment, and embed social good into your business. He also launched the accompanying podcast “OSE!”, in which he interviews successful entrepreneurs who weren’t afraid to try their luck or even fail; providing a behind-the-scenes look at the entrepreneurial adventure.