The Society & Organizations (S&O) Center and the European Venture Philanthropy Association (EPVA) recently teamed up with Action Tank Social and Business for a plenary focused on impactful investing. This movement seems to promise both financial return and a meaningful impact. But how can it bridge the problematic divide between traditional investing and corporate philanthropy? And how can companies commit to creating both social and economic value? These were among the questions that Jacques Berger asked during the evening of discussion and debate, which took place on October 10 at the headquarters of La Banque Postale. A former employee of Braxton Associates and Boston Consulting Group, Berger has run Action Tank since its creation in 2010. 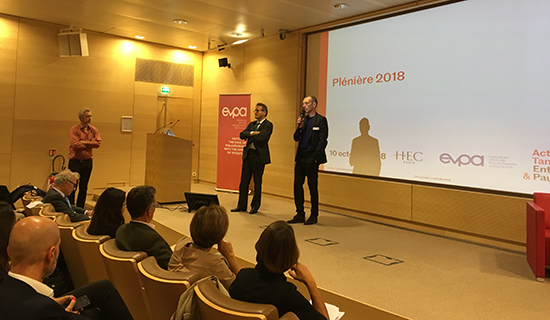 How would you assess the plenary?
Jacques Berger: I’m particularly pleased that we had a full house and some insightful contributions. For me, impactful investing is primarily a movement of hope. And this hope is almost chimerical, in the etymological sense of the word. In Ancient Greece, the Chimera was an animal of many parts: one part antelope, one part horse… Impactful investing is also a kind of chimera: there is an element of corporate investing, an element of philanthropy, and we end up with something great.

The main purpose of today’s plenary was to assess whether we might be expecting too much from impactful investing. What will it really bring to the table? The subject of the debate was quite delicate, as we called into question the current level of commitment to impactful investing. Like Monsieur Jourdain in Le Bourgeois Gentilhomme , business leaders are realizing that they have been practicing impactful investing without even being aware of it.

Hence your decision to begin the event with a short speech from HEC Associate Professor Afshin Mehrpouya. He showed that impactful investing has become a kind of portmanteau and that it has lost some of its arrogance…
I would not have been at Action Tank for eight years if I believed that the economy served the few and not the many. Which is why I count myself among those who have put a lot of faith in impactful investing.

Simply put, I believe that too much light can make contrasts fade away. As things stand, contrasts are scarce in the world of impactful investing, and this means we aren’t asking ourselves some important questions: “Am I more invested in social or environmental issues? What kind of impact am I hoping to see? What profound relationship connects questions of finance and society?”  All these equations have to be worked out on paper. Unsurprisingly, this takes time. But we have dedicated centuries to corporate investing; I think we can dedicate a few years to impactful investing.

Martin Hirsch, co-president of Action Tank, spoke about the development of one of your flagship programs, the Malin Program, whose scope now extends nationwide. We have also seen that the French government has made Action Tank “an important partner” in its campaign to alleviate poverty. How has this growing reputation in France affected your organization?

It certainly hasn’t had a negative impact. In its plan to fight poverty, the government states its intention to provide operational – rather than financial – support to the Malin Program, in order to help tens of thousands of children as opposed to thousands. So we’re talking about a considerable change in the project’s scale. This is also an intelligent move from the state because, rather than giving us money, it is offering us access to the files kept by the Caisses d’Allocations Familiales (CAF). We have been analyzing these files for a few years and we are now in a position to make the most of them.

My only reservation is how we are going to put all this into practice. The public support for our program, and its impending expansion, are obviously both fantastic on paper. Now we must translate this potential into tangible results. In one of our programs, we have spoken about setting up a corporation that could bring about this change in scale within the next year. It would take this new economic model to its limit, in terms of size and auto-financing. We must show that we have found models that do not need constant replenishment in order to function and grow.

Action Tank has also cast its gaze abroad…
Yes, but we already have a lot of work to do here in France. It would be ludicrous to take our foot off the gas in France. Our programs abroad must not come at the expense of our French projects.

We have ties with organizations in Brazil and in India, and they encourage us to share our experience because they are interested in the Action Tank model. This internationalization of the model is being implemented by the Yunus Social Business Center , which has adapted it to the local climate. In Senegal, we are exploring all possible avenues.

But to reiterate, we are very wary of becoming a company that takes on different projects without finishing any of them.

How are HEC Paris and its S&O Center contributing to your projects?
The school is integral to at least one project, as Marieke Huysentruyt and Rodolphe Durand have been working on the Malin program. We are still in the early stages of collaboration. Essentially, our team is still in its development phase. The S&O Center’s researchers have to cover domains that are far removed from the “classic” academic subjects. So it’s a real challenge to find researchers ready to build their careers around subjects such as ours. But I am convinced that, thanks to Rodolphe, we have the impetus and critical mass necessary to respond to these challenges. Our best is still to come.