Looking Back on TEDxHECParis: A Student Experience

For the first time in a couple years, HEC Paris organized and hosted an in-person TEDxHEC Paris verbal joust. 12 speakers shared their individual interpretations of the 2022 theme “Blind Spots”. Behind the May 12 event was a team of devoted students who guaranteed the quality and continuity of this popular event. Three talk us through its preparation. 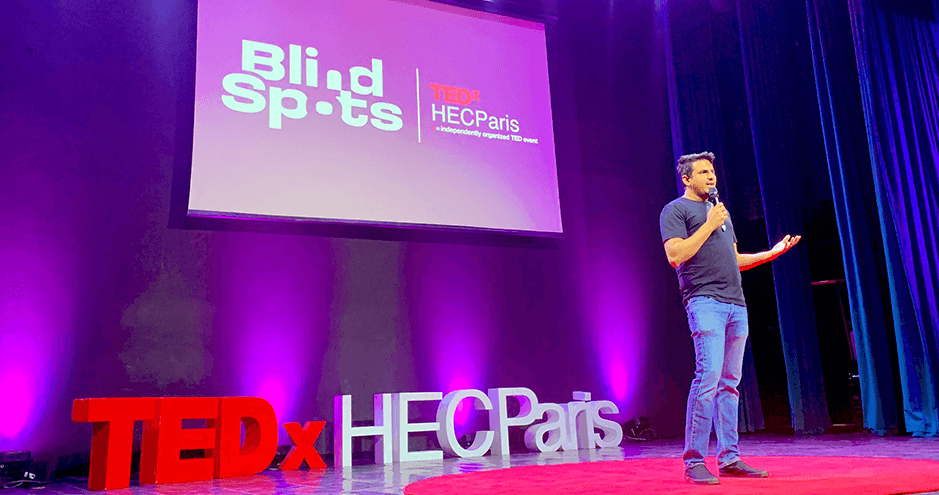 “This was a labor of love that began back in September 2021.” TEDxHEC Paris president Archit Sharma smiles wearily as the last of the audience leave the Blondeau amphitheater after feasting on hours of sparkling presentations on “Blind Spots”. The MBA student and his team of 20 have completed something of a marathon putting the finishing touches on a TEDx which, the organizers promised, would challenge the audience and live viewers by “bringing unconscious prejudices to the light.” “Are you ready to face your biases?” asks the event’s Twitter page. “We are back with a refreshing outlook on preconceptions that you may not even realize exists!”

And the dozen speakers did their best to tease out our blind spots. Helen Lee Bouygues, Sylvain Duranton, Julie Andrieu, Alexandra Mitsotaki, Christian Vanizette, Samuel Deason, Philippe Zaouati, Thandiwe Mkhetshane, Baptiste Gobilliard, Julie Joly and  Vincent Boichard, followed each other on stage with inspiring looks into topics as diverse as a possible 18th Sustainable Development Goal or the dating apps and sexuality of people with disabilities. “I have to admit that when we began discussing our theme in our initial brainstorming station last year, we never quite imagined such a diversity of topics,” admits Maria Godlewska, one of the seven-person executive team which masterminded the initial steps. “But it put a spotlight on how blind we are to different perspectives in the world, how we walk this narrow path and ignore everything we’ve left on the side.” 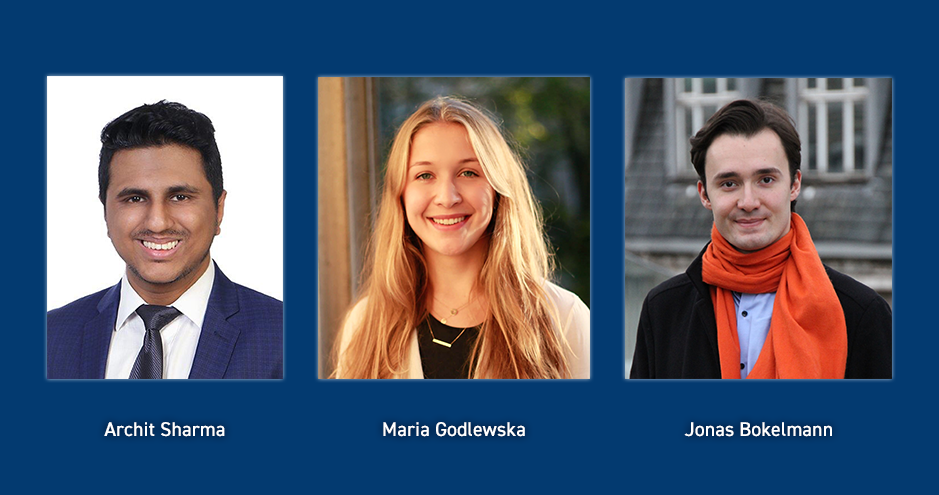 Whittling Down the Candidates

Jonas Bokelmann comes back to how the notion of blind spot first materialized. “We got together in a classroom and threw around ideas that landed on a whiteboard, there must have been 20 different ideas up there. For example, Renaissance 4.0 is one I specifically remember, it was thought-provoking. But we were all divided and, really the only theme that seemed to federate everyone was this notion of blind spot – mainly because everyone had their own interpretation of it. So we plumped for that.” It went on to inspire almost 70 candidates, evenly divided between students and independent contenders.

The ”nitpicking” between the student jury began when this list was brought down to 15. Many candidates had opted for sustainability questions. “Given my background as a SASI student (Master in Sustainability And Social Innovation, ed.),” says Godlewska, “I was obviously more drawn to this angle, particularly when it links environment with social issues. I was glad the presentation on the pipeline Total is building got through.” 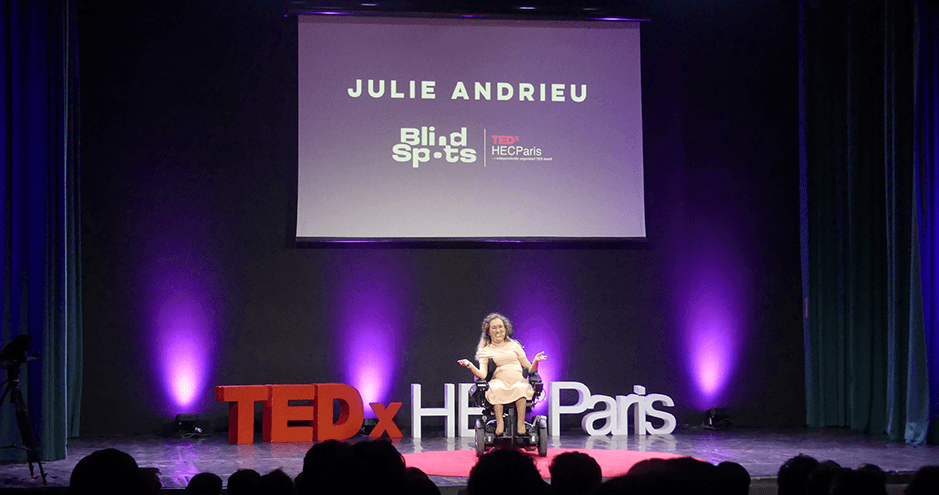 The team and audience were unanimous about which talk had most struck them: it was the one delivered with poise by HEC Finance Major Julie Andrieu. “We see disabled people with disabilities all around us,” says Sharma, “but no one ever questions their sexuality or dating apps. It’s so commonly overlooked and the way Julie described it was, well, just insane! But she’s known for her eloquence and humor, so we shouldn’t have been surprised…”

The finance and digital specialist has a long personal history with TED talks. “I think I was in ninth grade in India and Bill Clinton delivered one of the most moving speeches I ever heard,” explains Sharma. “Essentially, it was about the meaning of power and how people who have power don’t want to exercise it. And people who don’t have power want it but don’t want to exercise it either. So it’s a vicious circle.” Since then, Sharma has been involved in organizing a few talks in the TEDx movement. So how has this HEC TEDx differed from the others? “Well, for a start, I’ve never quite seen such a diverse student community as here. And they are not only diverse in backgrounds, but also in the disciplines they study. On our team we have MBA, MiF (Master in International Finance, ed.), SASI, Grande Ecole, all well represented. And so there’s no single thought processing inconsistency, every idea is debated, sometimes heatedly. It might be difficult to organize at times, but it’s also so rewarding. I don’t think there are too many colleges in the world that can bring together so many age groups, nationalities, financial backgrounds and aspirations.” Bokelmann concludes: “I hope the next student learns from us and from the previous TEDx talks here. This is an iterative generational project and it will gradually improve. I’m sure it will be fine.” 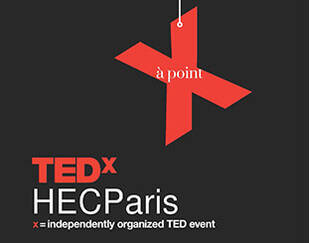 TEDxHEC PARIS 2021: “à Point” an Intersection Between HEC’s French Origins and its International Base

Almost 200 people followed the five-hour long TEDxHECPARIS centered on the intriguing theme “à point”. To answer the invitation, nine people from all wakes of life deliberated on concepts as diverse as... 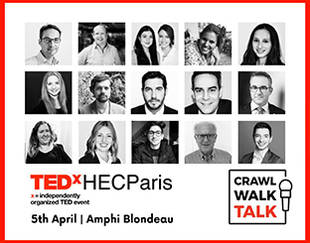 For the third time since TED was conceived in 1984, HEC Paris students organized a TEDx event, choosing “Crawl, Walk, Talk” as the 2019 theme. The April 5 gathering was played out in front of a privileged...
Share
FACEBOOK
TWITTER
LINKEDIN
EMAIL