During their first weeks on the HEC Paris campus, students in the January 2020 MBA intake who are receiving support from the HEC Foundation were invited to a scholarship award ceremony on Monday 13 January. 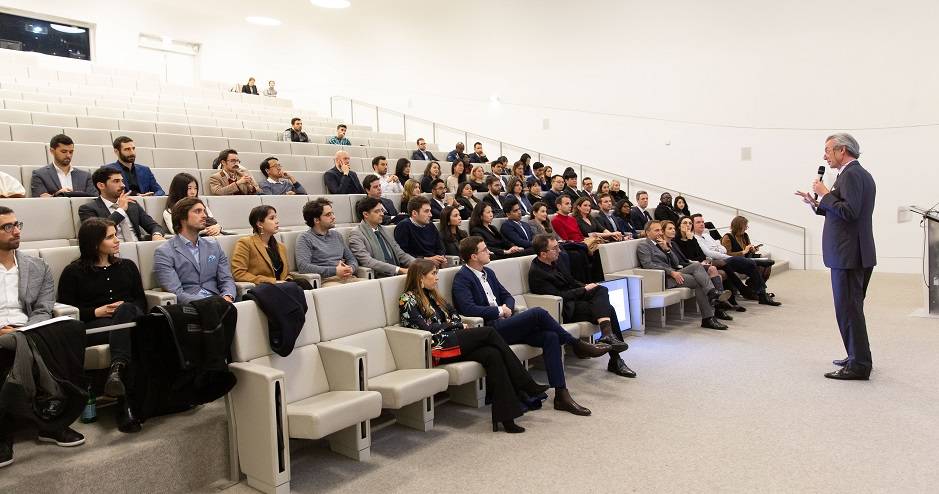 On this occasion, one of our Major Donors, Pierre de Labouchere (H.76), honored us with his presence and shared his belief in the benefits of diversity he has observed both professionally and personally. Once again, we salute his commitment to the HEC Foundation and his support for the funding of student scholarships. He ended his address to the scholarship students with the words:

As I see it, your life takes a turn for the better when you realize that you gain more satisfaction from giving than from receiving.

Pierre de Labouchere, himself a former international business leader, is keen to encourage international diversity at HEC Paris so that it can continue to attract the finest students from around the world. With 105 nationalities represented on campus, HEC Paris is strengthening its position on the international scene, while preserving its culture of excellence à la Française, based on its tradition of stringent selection, in particular.
Today, this diversity is a driving force for promoting the HEC trademark among leading recruiters around the world. Thirty-eight nationalities are represented in this new class, and thanks to sponsors like Pierre De Labouchère, more than half of the 110 students have benefited from financial aid from the Foundation.

During this event, Andrea Masini, an Associate Professor and Associate Dean of the HEC MBA program, and Déborah Aringoli, the HEC Foundation’s Director of Development, also took the floor to mention the commitment to cultural openness at HEC and the plans to develop it. They also took the opportunity to thank the donors without whom these scholarships could not be awarded.

Two beneficiaries – Monica (MBA.21) and Tim (MBA.21) – then concluded the ceremony by expressing their gratitude toward the donors and the Foundation’s staff for this precious support, which will allow them to make the most of every moment of their HEC experience.

Finally, each of the students present received a diploma confirming the scholarship received from the Foundation for the 2020/2021 academic year, and many of them were keen to leave written messages reiterating their thanks to all the Foundation’s donors.