The 14th Edition of the Medici Summer School in Management studies was held on HEC Paris campus from June 12th  to 17th, 2022. Hosted this year by the S&O Institute and co-organized with the Bologna Business School and MIT Sloan School of Management, the school gathered 25 selected PhD students from all over the world for an intense week of lectures by prominent international scholars. Throughout the week, the theme:  "Strategy for What and for Whom?" was broadly analyzed in the discussions between the faculty and the participating students.

Social movements and Firms: From Absentee, to Target and Product, to Partner and Participant

Kate Odziemkowska, Assistant Professor of Strategic Management at Rice University’s Jones Graduate School of Business, led the first day of the 14th Medici Summer School. A nonmarket strategy expert, Professor Odziemkowska started with an overview of her vast research agenda on firms’ cooperation with nonmarket actors, including social movements, communities, and activists. She then proceeded to a detailed historical account of social movement theory, going back to the 1960’s, when firms were largely absent from the study of social movements. In the rest of her morning session, Professor Odziemkowska outlined key concepts and research opportunities for management scholars, considering three different perspectives: firms as targets, products and partners of social movements.

In the afternoon, Professor Odziemkowska discussed a fourth perspective: corporate activism (also referred to as CEO activism), a more recent phenomenon whereby firms actively engage with social issues, either as supporters or as antagonists. The rest of the afternoon session was devoted to a group exercise that asked students to develop potential ideas for research using a specific framework. The model, explained in detail by Professor Odziemkowska, suggests that researchers may gain insight into potentially novel theoretical contributions by searching for: i) novel independent variables that may be used as predictors of well-established outcome variables; or ii) novel outcomes to be associated with independent variables already present in the literature. 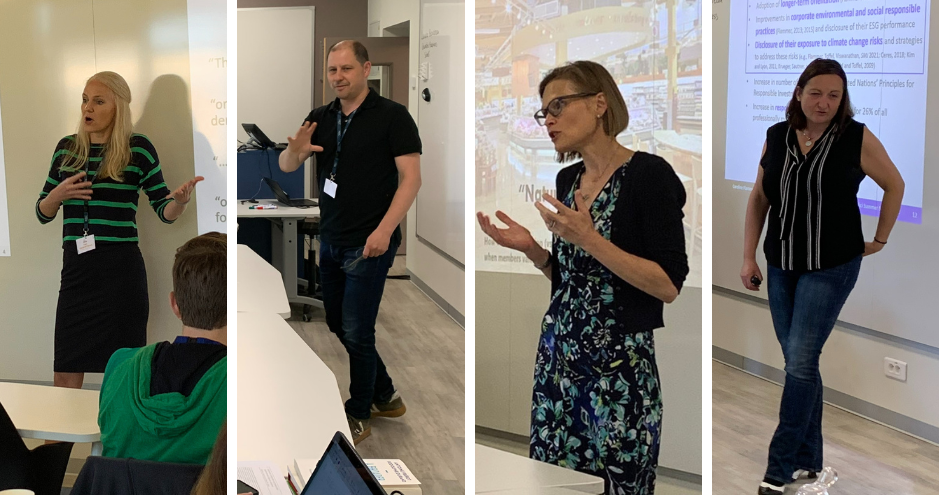 Marya Besharov, Professor of Organisations and Impact at the University of Oxford’s Saïd Business School, lauched the second day of the summer school with an introduction to the concept of organizational hybridity, broadly defined as forms of organizing that mix up business and social actors. She then proceeded to a three-part intervention, beginning with the theoretical foundations of hybridity, comprising three groups of concepts related to organizations’ forms, identities and rationales, respectively. The second part of Professor Besharov’s session consisted of a broad survey of empirical papers covering topics such as the antecedents of hybridity, hybrid organizing strategies, and the challenges and opportunities associated with hybridity.The morning session ended with a discussion about a method useful to describe framing strategies for papers using hybridity as a theoretical lenses.

In her afternoon session, Professor Besharov conducted a group exercise whereby summer school participants discussed whether and how their own research contexts would fit into the framework described earlier. Back to the classroom, each group described one of the research contexts that emerged in the group discussions­­––and how this context was assessed in light of the framework––with Professor Besharov providing specific comments and suggestions to each group. At the end of the session, three students presented their research to the rest of the group and received detailed feedback on their work.

John de Figueiredo, Russell M. Robinson II Professor of Law, Strategy, and Economics at the Duke Law School and the Fuqua School of Business initiated the third day of the summer school with a detailed historical review of the nonmarket strategy field. A pioneer in this area, Professor De Figueiredo described how nonmarket strategy evolved from a relatively small research stream focused on companies’ interactions with politicians, to a vast and multilayered research agenda comprising a wide variety of social actors and organizations, and their complex interactions. In the second part of the morning session, Professor De Figueiredo explored seven papers at the frontier of the nonmarket strategy literature, highlighting, in particular, the empirical strategies employed by the authors to overcome endogeneity concerns––highly prevalent in nonmarket strategy contexts.

The afternoon session started with a group exercise centered on two databases introduced by Professor De Figueiredo: the Database on Ideology, Money in Politics, and Elections (DIME) and Lobby View. Each group of students discussed potential research ideas involving these databases in conjunction with other datasets relevant to their empirical contexts of interest, and, at the end, each group presented at least one idea to their colleagues. Day 3 closed with a visit to Hectar, a pilot farm promoting sustainable food production at the Paris region, which also hosts the largest accelerator of Agritech and Foodtech startups in Europe. 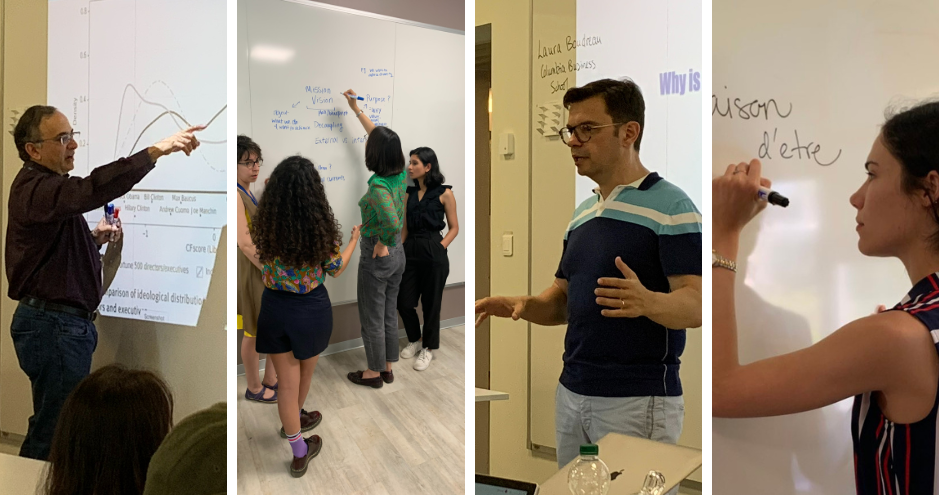 Ezra W. Zuckerman Sivan, Alvin J. Siteman (1948) Professor of Strategy and Entrepreneurship at the MIT Sloan School of Management, led the morning sessions of the fourth day. A pioneer sociologist in the field of strategic management, Professor Zuckerman Sivan provided a historical description of strategy as an academic field, going back to the late 1970s, and placing particular emphasis on the role of sociologists. Next, he used the NUMMI (New United Motor Manufacturing, Inc.) case as a basis to discuss organizational transformation and change.

In this debate-like theory-building exercise, Professor Zuckerman Sivan not only described conditions that may be necessary for successful organizational transformation, but also connected the discussion with purpose, relating specific characteristics of NUMMI with different dimensions of organizational purpose. He closed his session with an analysis of structural racism in the United States, highlighting, in particular, how organizations can transform themselves and become important actors in the fight against racial inequalities and structural racism.

Rodolphe Durand, Joly Family Purposeful Leadership Chair at HEC Paris, conducted the afternoon sessions. Professor Durand started his intervention with an overview of his own career as a strategy scholar––from his transition of philosophy to management studies, all the way to the foundation and expansion of the S&O Institute at HEC Paris.

One of the main scholars researching and teaching corporate purpose today, Professor Durand devoted the bulk of his session to a conceptualization and detailed examination of the notions of purpose and purposeful leadership. In a group exercise, he helped students understand why organizational purpose is so central to businesses today. Next, Professor Durand described a powerful framework that students can use to assess differences across multiple but intertwined theoretical concepts. In a debate-like exercise, he applied this framework to differentiate among four interrelated constructs: purpose, ESG, CSR, and pro-sociality. The session ended with four students presenting their work.

Caroline Flammer, Professor of International and Public Affairs at Columbia University, led the final day with a rigorous and detailed examination of the role of corporate governance in enabling purpose and social responsibility in organizations. Professor Flammer discussed several of her research papers, highlighting, in each of them, specific governance mechanisms that can be leveraged to deepen social impact and enable a more sustainable, long-term orientation in organizations. She also spoke about research impact, emphasizing the importance of moving from the firm-level unit of analysis––prevalent in strategy and management studies––to a systems-level perspective.

Later on, Professor Flammer shared an eight-step framework she uses to assess the relevance of any given research project. She then conducted a group exercise where students discussed and evaluated potential research ideas in light of the framework introduced earlier. Additionally, throughout the session, Professors Flammer and Durand answered a variety of questions from students, covering topics related to career pathways, the research publication process, and many others.

As the day drew to a close, Professor Durand took center stage. He urged students to endure the pressures of academic life and continue to do research that they are passionate about, while also keeping alive the creative and highly collaborative spirit of the Medici Summer School. 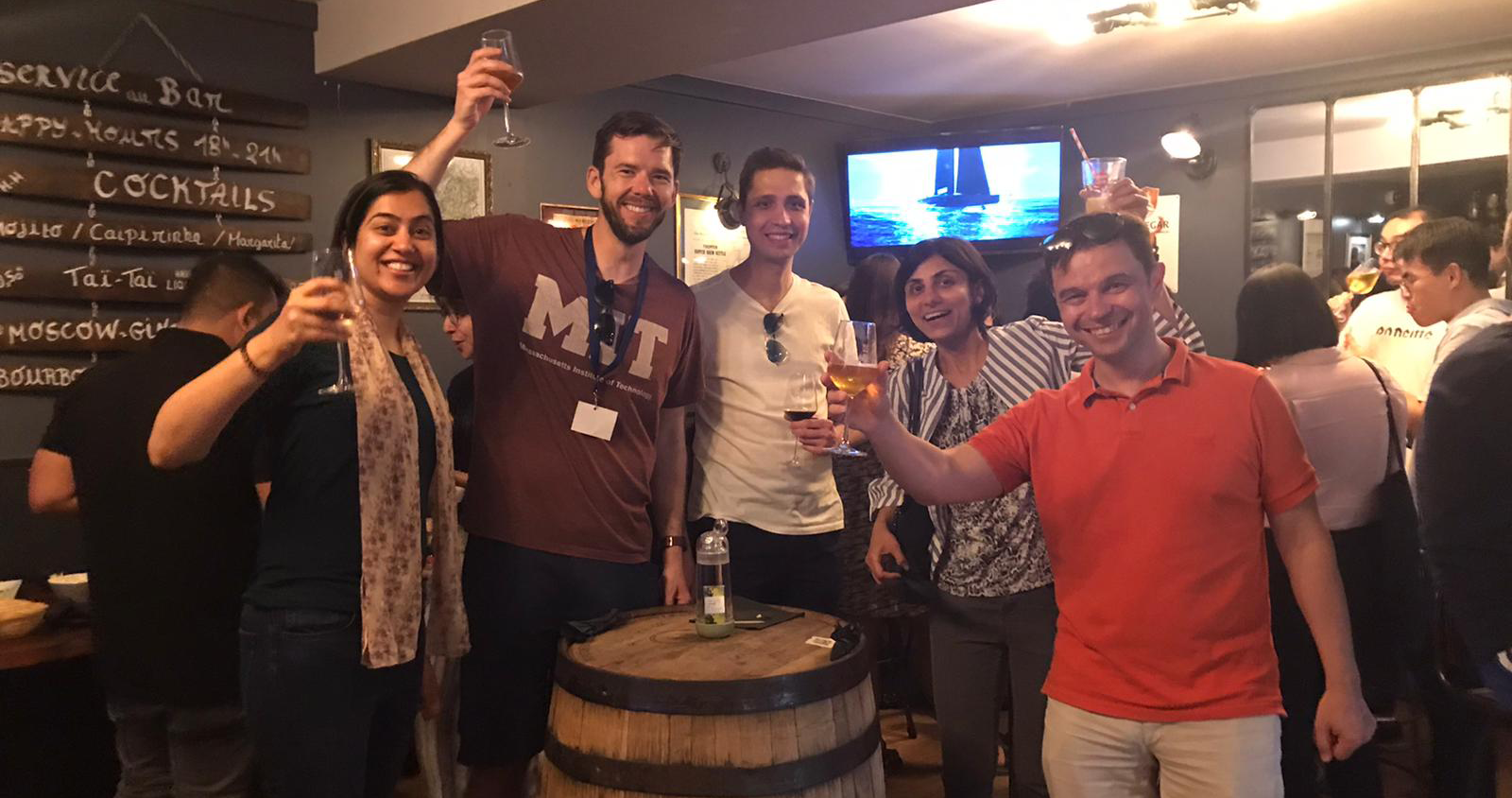 More about the Medici Summer School