SASI Graduate Cycles Across the USA on a Mission

Today, Sushil Reddy, SASI Graduate and former Guinness world record holder for the longest journey on an e-bike, and his friend, Luis Fourzan end their tour of the United States, where they have traveled nearly 6,500 miles (10,500 km) on bikes powered by human energy and the sun in an effort to raise awareness on electric mobility, healthy living, and solar energy. 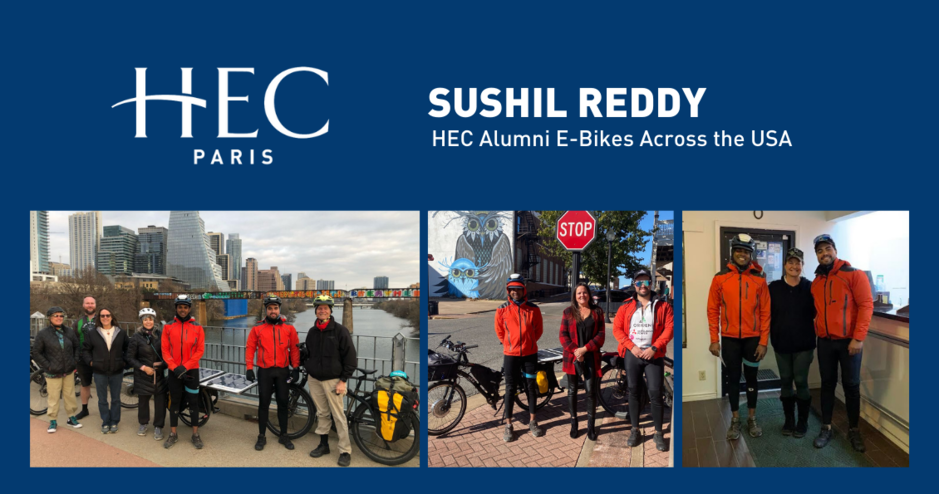 They’ve gone the distance. Sushil Reddy, HEC Paris MSc Sustainability and Social Innovation (SASI) Alumni and former Guinness world record holder for the longest journey on an e-bike, and his friend, Luis Fourzan, are once again crossing continents for a purpose. Today ends their tour of the United States, where they have traveled nearly 6,500 miles (10,500 km) on bikes powered by human energy and the sun in an effort to raise awareness on electric mobility, healthy living, and solar energy.

“How far we go on any day depends on the weather and our schedule,” says Reddy, who has been on the road since mid-August, for an average of 60 miles a day, some days going up to 120 miles in a day. Once the solar-paneled bikes were built in North Carolina, Reddy and Fourzan travelled with their customized gear up the East Coast to NYC.  After this they headed west and rode across to Chicago and through Minneapolis, eventually crossing the snow-capped Rocky Mountains. They followed the west coast south from Seattle to Los Angeles, and now back across again to finish in Texas. “I come from Mumbai, and I hate the cold weather,” says Reddy.  “Two weeks in Montana in snow was a challenge.”

Today they will finish the ride in Houston, Texas, but their ambitions won’t end there.

“The ride is part of a series of journeys on solar paneled electric bikes,” says Reddy.  His website, The Sun Pedal Ride, is where he raises awareness on electric mobility, healthy living, solar energy through his bold example.

The bike itself has solar panels on the back which charge it on the go. 50 percent of the energy comes from these panels, and 50 percent is human-powered.  Reddy worked with Sol Mobil, a workshop in North Carolina, to put together all the components.  One of the biggest challenges while traveling has been bike parts and repairs. “We keep checking every day, so we don’t break down in the middle of nowhere.”

The only time off their bikes is in the evenings and, which they relax in their own rooms to talk with friends and family, and plan the next day. Along the route they’ve connected with journalists, educators, and locals across America, spreading awareness of the many benefits of cycling. “The goal is to show that people can use electric bikes for long distance touring, or even for the daily commute.”

“Anybody can do it. It’s not a big deal,” says Sushil.

Read about the SASI Program

Look back at Sushil's Trip Across India