Imagine a childhood without ice cream, buttery popcorn, or cookie dough. Forced by a debilitating milk allergy to find creative alternatives to “everything dairy”, Judith Camarcat (HEC Paris, MiM 2018), spent much of her growing up years feeling left out -- because of the food she couldn’t eat. Luckily for her, her allergies coincided with a food revolution that was just about to explode. Now she's a key player in shaping this new industry. 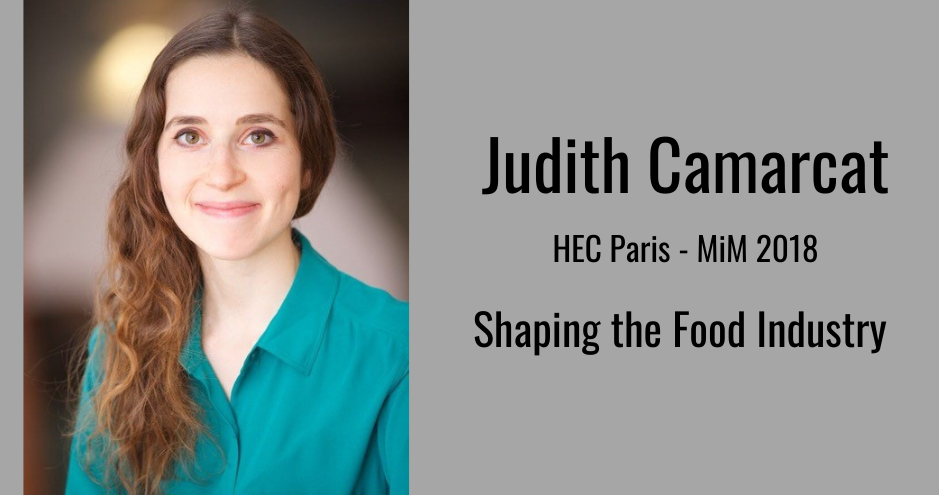 “I’ve been allergic to butter since I was 10 months old. It’s really a personal tragedy,” she says in a perfect American accent, which seems out of place for someone born and raised in France. Growing up in France, it’s clear to see where her foodie values stem from. Forced by necessity to eat differently, she taught herself to cook, creating her own plant-based foods and finding her own dairy alternatives. “Food became a passion, an obsession,” says Judith.

“HEC Paris opens doors in a lot of senses.” “It gave me a global view and opportunities for international exposure.”  While attending HEC Paris, she spent time on exchange at both at the University of Pennsylvania and London School of Economics. But more than that, “HEC allowed me to discover a whole new industry,” says Camarcat. “Before HEC Paris, I didn't know what VC (venture capital) was,” she admits.

It was always a question of “how can I blend personal passion into my career?”

Initially, mixing her passion for food with her academic background was challenging for Judith. Investing and Food Services, a very niche industry, was difficult to target. One of her HEC Paris professors encouraged her by saying, “Go make a resume that speaks for itself... and speaks food.”

She completed her Master’s Thesis on Corporate Venture Capital in the Food Industry, and with help and a recommendation from her master thesis tutor, Hélène Löning, along with previous HEC interns, she secured an internship in New York City at Danone Manifesto Ventures, their corporate Venture Capital fund.  “You have to go and open these doors, but the opportunities are there.”  Things started to line up, and the timing couldn’t have been better.  “It was serendipitous that my passions were in line with the food industry as it was about to take off. Dairy alternatives were quickly becoming an industry thing,” says Judith. It was while she was working for McKinsey that Five Seasons Ventures reached out, and she quickly accepted the job of Senior Analyst. She is also a board advisor at Vly, a German company that makes a pea-based milk alternative.

“My one true goal in life has always been food, food, food.” Getting to be amongst the first to sample plant-based dairy products and deciding which vegan ice cream makers to fund is all in a day's work these days for Judith.

Find out more about our MiM Program here.