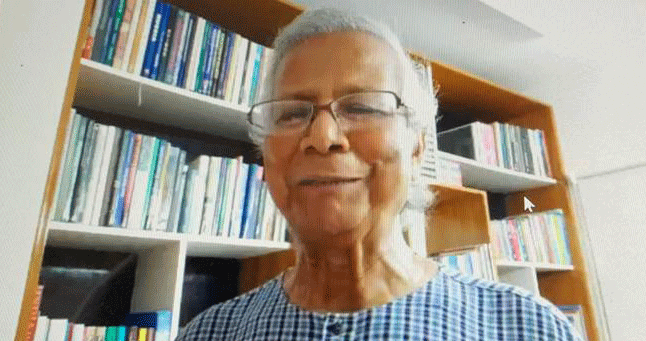 “With the COVID-19 crisis, we have a wonderful opportunity to transform our world. That’s because all the pillars have collapsed, trade has collapsed. This is a moment for a new, drastic, brave and daring new world. But we have to be bold in coming out of the pandemic.” Once again, Muhammad Yunus pulled no punches in his May 13 exchange with around fifty HEC students and social entrepreneurs aiming, in the words of Bénédicte Faivre-Tavignot, to make a difference and have a positive social impact. The founder of the Grameen Bank was speaking from his base in Bangladesh to students in the 12th edition of the Inclusive & Social Business Certificate, which ended on June 5. “This is a time when countries should be binding together, there should be more common strategies and multilateralism. Unfortunately, we are not seeing this, we are seeing aggression, especially coming from the United States, which is going back in history, to a form of tribalism.”

Despite this turbulence, the 2006 Nobel Peace laureate was upbeat about the “tremendous amount of freedom” the pandemic has opened up, albeit unwittingly: “We must seize on this moment and build a world without an assistance attitude.” The economist, who is to celebrate his 80th birthday on June 28, enumerated the measures needed: “There must be a new conceptual framework guiding the economy, to replace the one based on greed which has destroyed the world. To tame greed, social consciousness should be in the driving seat. For our very survival, an environmental consciousness should work alongside. For example, we must refuse fossil fuels, refuse plastics.”

Muhammad Yunus urged governments to make social business a central tenet to their economic policies. To catalyze this new approach, the education system needed a total revision, he said: “Today, there is a wonderful opportunity for change. The financial system needs a total redesign. So do the health systems. Health care must integrate micro-credits: affordable, driven by technology so there is easy access.”

In answer to a question from EMBA student Virginie, Yunus said the debate raging over a future COVID-19 vaccine crystallizes this redesign: “This vaccine must not be owned by private pharmaceutical companies! Patents must be open sourced, scientists need to share their experiences and remove patent rights.” He praised the EU commitment of €7.4 billion to research as a step in the right direction, but urged lawmakers to immediately create legislation guaranteeing that the vaccine be declared “a common good”.

“This is a time for daring initiatives,” he said, in response to a series of wide-ranging questions. Yunus pointed to initiatives taking place in Bangladesh, which have been widely commented in the media. “We’re allowing the poor to have the same access to capital as the rich: equity funds, venture capital, and so on. We need to undo the banking system to provide the same opportunities (to everyone).”

Initiatives by Bangladeshi authorities such as the 2018 Delta Plan, have defied prognostics in answering multiple challenges, including the pandemic: “Health, economic and climate resilience are interrelated,” said prime minister Sheikh Hasina, recently. “Bangladesh is unlikely to be the only country struggling with health, economic and climate emergencies this year. So international collaboration is vital: as countries we can learn from successes around the world and support each other.” This call for global unity echoed Muhammad Yunus’ public calls in The Print and Le Monde to “redesign (the world’s economy) from scratch.” It was a rallying call that students attending the virtual seminar appeared to approve.