Top personalities from the political and academic worlds, including Pascal Lamy, Peter Altmaier, John Denton and Merit Janow, were amongst the 17 speakers at a September 29 conference at HEC Paris on constitutionalism. Over three intense sessions, the policymakers and professors of law explored reforms in governance of public goods. In this article, however, our focus was on how innovative research in faculties should and sometimes does lead to concrete policy proposals. 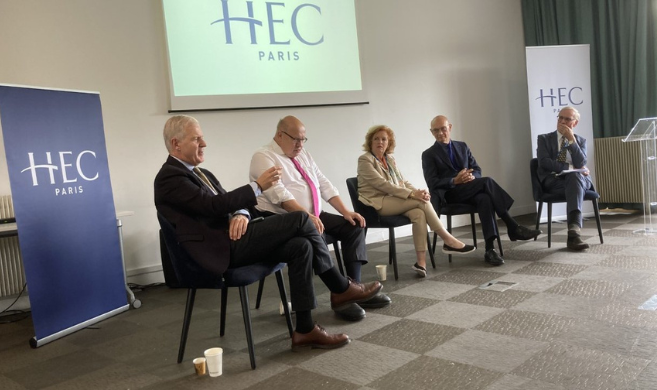 The HEC Paris' Society & Organizations (S&O) Institute conference went beyond constitutionalism to explore the failures of  transnational governance, policy responses and current free market dynamics in the past decade. It set out to propose reforms in multilevel governance of public goods at worldwide, European and national levels. In this way, the organizers, HEC professor of EU Law and Economics Armin Steinbach and Emeritus professor at EUI Florence, Ulrich Petersmann, with the S&O Institute, hope to develop academically innovative research and concrete policy proposals for policymakers. This, they believe, will encourage policymakers to implement new approaches to address the growing number of these governance and constitutional failures the world is currently experiencing.

The results of the three sessions at HEC are to be published in the form of a book in 2023. The following are reflections by some of the speakers at the September 29-30 conference.

Armin Steinbach, conference co-organizer, Jean Monnet Professor of EU law and economics.
Clearly, academia and policymaking are two different worlds. Both obey to different laws, different rules, different codes of conduct. And what is important and what is motivating my desire to organize this conference is to stimulate exchange. Because, in the past, this exchange has not always been very fruitful. Which makes it so important to invite policy leaders from whom we seek inspiration, from whom we seek policy ideas. But who we can also inform from our own academic side on what can be possible, what legal options they might have. In other words, which governance designs may work in politics?

Merit Janow, former Dean of Columbia University, New York. An internationally recognized expert in international trade and investment, she has extensive experience in academia, government and business.
One of the implications for schools of this kind, of which we have a global network around the world, is to look at contemporary challenges in an interdisciplinary way. And with the ultimate goal of integrating the scholarship of universities, their learning, their knowledge and creation - and finding ways to bring it into the world.

Peter Altmaier, former Minister for Economic Affairs and Energy in the German federal government in Angela Merkel’s term in office.
We need academic advice, not only in scientific matters, but also when it comes to both decision taking and decision shaping. That requires public support for universities because you need the jobs necessary to provide this information. But it also requires a closer cooperation between the political sector and the academic sector because the politicians are the practitioners; and the academics have to do the research in order to know what has been especially successful - and what has been a clear failure in the past.

We need academic advice, not only in scientific matters, but also when it comes to both decision taking and decision shaping.

Ulrich Petersmann, published over 30 books and 350 contributions focusing on international law, European law and comparative constitutional law. He also represented Germany in European and UN institutions (1978-1980), and was a legal counsel in GATT and a legal consultant for the WTO (1981-2021).
If governments and universities appoint academics who are not living in an ivory tower, but who combine their academic work with policy advice to governments at the national, European and international governance levels, this is a way of motivating students and explaining to academics and practitioners why public service is not only socially important but can also be existentially very rewarding for their academic and professional careers. Academic policy advice should not be money-driven but motivated by professional and moral ideals.

Pascal Lamy, former director general of the WTO and European Commissioner for Trade. HEC graduate in 1969.
We decided that we had to innovate with people outside political circles that have become major actors of international governance. They are drawn from businesses, multinationals, NGO's, large academic institutions. So, the concept is let's move international cooperation into the hands of those who have a capacity to get things done.

Christina Eckes, Professor of European law at the University of Amsterdam, currently researching the separation of powers in 21st century Europe.
It’s not always easy to interact with politicians, you saw this a little during the conference. I think there were some disagreements on how quickly we should move forward with climate mitigation in particular. I think there's always the academic who has the privilege of commenting from the outside.  And the policymaker who has to reconcile all the different interests. And there are of course many more factors. Yes, being idealistic is easier for an academic than for someone who has actually to carry through the policies, but that does not mean that academics do not have the role of holding the yardstick or the mirror to policymakers, asking them what they really contributed to advancing the cause.

Henry Gao, Professor of Law at Singapore Management University, Member, Advisory Board, WTO Chairs Program.
I think it's important to understand the different backgrounds and needs of different countries and try to tailor their policy advice. Academics must put themselves into the shoes of the policymakers. I understand their limitations, what they need, and therefore I tailor policy advice. In that way, I think, I can fashion what I believe is the best advice possible.

Erin Daly, Professor of Law at Delaware Law School and co-founder of the Dignity Rights Projects.
Right now in the clinic that I'm directing, I'm working with students to advance the dignity of people who are system impacted, whether they're incarcerated or they are being tried for criminal conduct or even post release. And we're looking at the different ways in which our system in the United States harms and ignores people's dignity, and fails to respect them, and ways in which we might advance the law so that it respects dignity.

In the clinic that I'm directing, students and I are looking at ways in which we might advance the law so that it respects people's dignity.

John Denton, Secretary General at the International Chamber of Commerce, Paris. Former Fellow at the Australian Institute of International Affairs.
That's where I think universities could learn from these sorts of discussions and try to reflect on the question: ‘Oh, maybe that's how we should prioritize issues if we want to be heard and be relevant’. Global institutions, meanwhile, should also have breakout groups when they hold their general assemblies. Or they should create impact groups which involve academics. Academics still enjoy very high trust levels, particularly the experts, amongst citizens. But, they should join forces with the private sector to actually bring forward fresh thinking into these debates, because a lot of these debates are very sterile and actually position-based, whereas we in the private sector and universities are more interest based. So bringing that into the discussion could be very useful.