HEC Paris continues to enrich its Académies curricula with a new program devoted to understanding  the erosion of biodiversity due to human activity and exploring ways the private sector can help preserve Earth’s sustainability. In January 2022, the school inaugurated the program which included eye-opening visits to natural sites, restoration works and Ile-de-France ecosystems. The students also enjoyed hard-hitting exchanges with business leaders and scientists. The program, which attracted 14 students from various faculties, was designed and accompanied by three HEC alumni, and supported by HEC’s Institute Society & Organizations, Quantis and I Care. 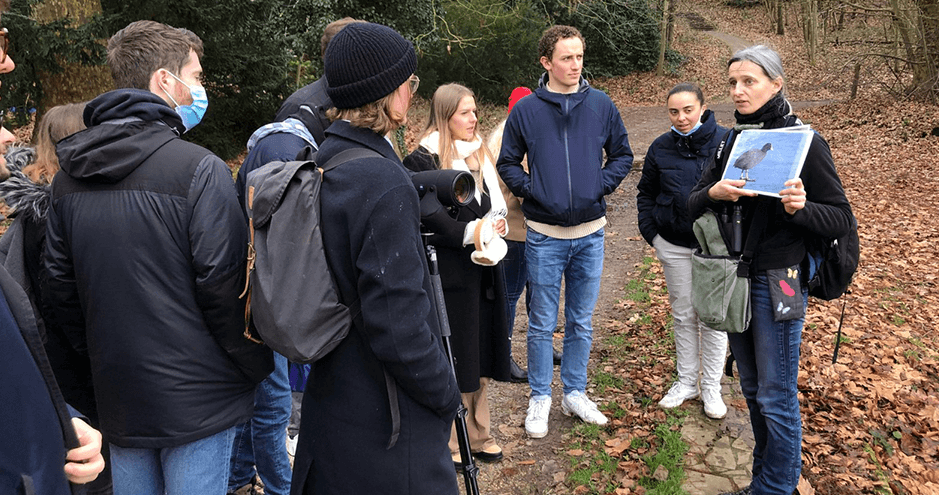 In France, they call it the “troglodyte mignon”, or “cute troglodyte”. The Eurasian Wren used to thrive in temperate forests, rural gardens and urban areas. But, on this frosty January morning, its piercing call echoes forlornly through the Vallée de Chevreuse before reaching a group of 13 students huddled around their guide. “At present, these territorial birdcalls are rarer and rarer in these woods.” Solen Boivin sighs as she evokes the slow disappearance of the 9cm long bird from the Saint Rémy forest, some 30 kilometers southwest of Paris. “Deforestation, neonicotinoids and pesticides have led to the disappearance of 85% of the insect population and their habitat,” pursues the national conservationist working for an association of biological farmers for Ile-de-France (GAB IdF). “And they are vital for birds which feed on them in agricultural settings! A third of the bird species have thus disappeared from Ile-de-France. The mignon survives but it is on France’s danger list. Meanwhile, inner cities are also affected: 73% of sparrows have died in Paris between 2003 and 2016… And much of this is down to industrial activity and industry’s ignorance of this valley’s biodiversity. Not to mention the re-introduction of the neonicotinoid insecticides.” The use of the controversial neuro-active chemicals followed French legislation voted in last year to protect national beetroot production. “We saw the impact on ‘mignon’ population almost overnight,” adds the conservationist. 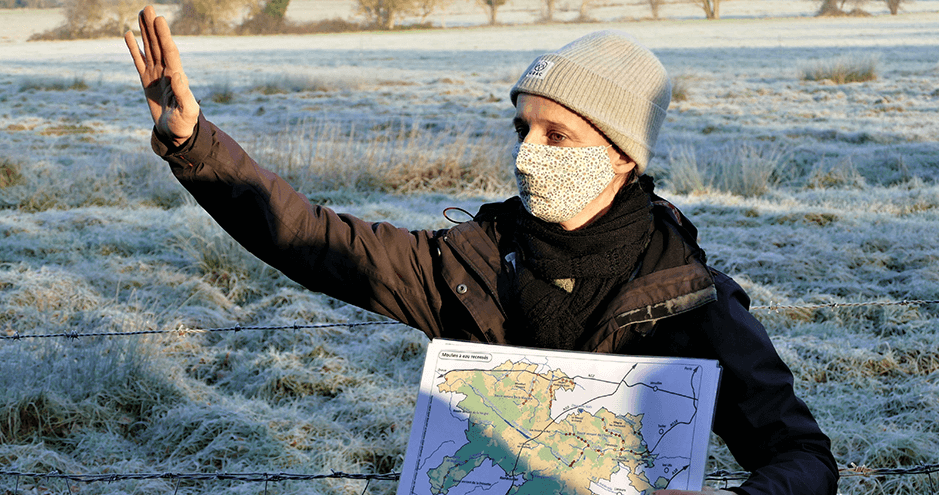 It’s a cloudless frosty morning and the 13 students from the Biodiversity Academy are pausing on the 6.6-kilometer “biodiversity walk” organized by Boivin, a veteran of the Réserve du Val et Coteau de Saint-Rémy and its 83 hectares. The visit is one of four on-the-ground experiences the Academy has organized for students, not only from HEC Paris, but also the W journalism school, Sciences Po and even the La Rochelle Excelia school. For three weeks, and a total of 105 hours, they have been plunged into a program designed to teach them the very notion of Earth’s biodiversity, its fragility, the extent to which it is pressured by human activities and the attempts to preserve it in the context of the entrepreneurial world.

Animal or Plant Disappearing Every 17 Minutes

“Biodiversity is something that is rarely discussed,” comments journalism student Asmaa. “Yet, it’s far more urgent to address its degradation than climate change. We’ve learnt that we’re experiencing the sixth mass biodiversity extinction in Earth’s history, the first since the disappearance of the dinosaurs.” HEC student Aure regrets the relative silence on the subject in academic circles: “Perhaps that’s because it’s hard to project a career in biodiversity. But this course shows how much companies need to invest in building a balance between their activities and preserving species: the UICN (the International Union for Conservation of Nature, ed.) has estimated that an animal or plant is disappearing every 17 minutes!” Fellow-student Emilien, meanwhile, applauds the way the HEC Academy has struck up a fine balance between theory and practice: “This is an excellent program,” says the engineer from Lebanon, “because, none of us can now say: ‘We didn’t know.’ Visits and exchanges like this one, have given us concrete ideas on how to integrate the necessary constraints for preservation and the jobs we are soon to get.” Beside Emilien, Yannick marks out the visit to Ynsect as a stand-out experience in the program. For the past decade, this French company has led the world in transforming insects into high-value ingredients for animals and plants. ‘They underlined the fact that you can have a strong positive impact on biodiversity and be a profitable enterprise. They’re setting an example worldwide because they are both environmentally friendly and proposing long-term sustainable solutions for food production.” 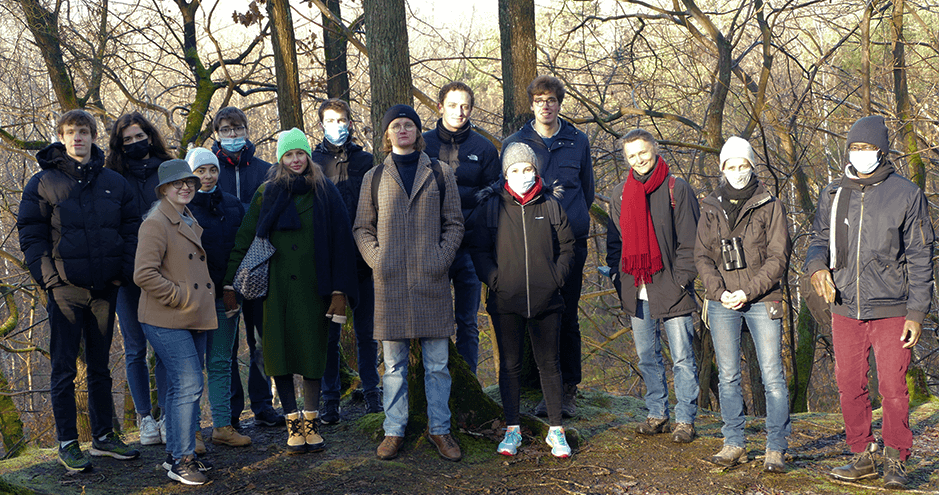 The Academy program’s balance is down to the intense work put in by HEC graduates Julie Christiaen, Adam Melki and Eliette Verdier. Christiaen and Melki are now biodiversity consultants at Quantis, whilst Verdier holds down a similar post at I Care. Back in September 2021, the three decided to create a program designed to plunge students into a concept the student body knows little about: “We sought to communicate our enthusiasm and scientific knowledge to relative neophytes,” says Christiaen. “It was a delicate balance and we were greatly assisted by the support of François Collin,” adds Melki. The Director for Climate and Environmental Sustainability at HEC insists this new Academy is part of a general drive by the school to teach its students the major ecological challenges they face and the responsibility they have through their future entrepreneurial work: “The capability of anticipating the impact of a company in terms of biodiversity has become an absolutely indispensable skill for future managers and leaders,” Collin notes.

Verdier’s previous experience in HEC’s MSc Sustainability and Social Innovation (SASI) degree brought home the need to upgrade student understanding of this field: “I was struck at how little we spoke of biodiversity. Yet this crisis is happening right now, not in 2050. Students must be exposed to it in all their courses and think up out-of-the-box solutions.” Nevertheless, Christiaen underlines that a recovery is not too late: “We are building a positive story. It’s a different one to the climate crisis, the limits have not been surpassed and we are showing that nurturing a balanced diversity is not going against human wellbeing – quite the opposite. Modifying the impact of human activity on the environment can reconnect us and bring solutions to climate deregulation and help the ecological transition.” 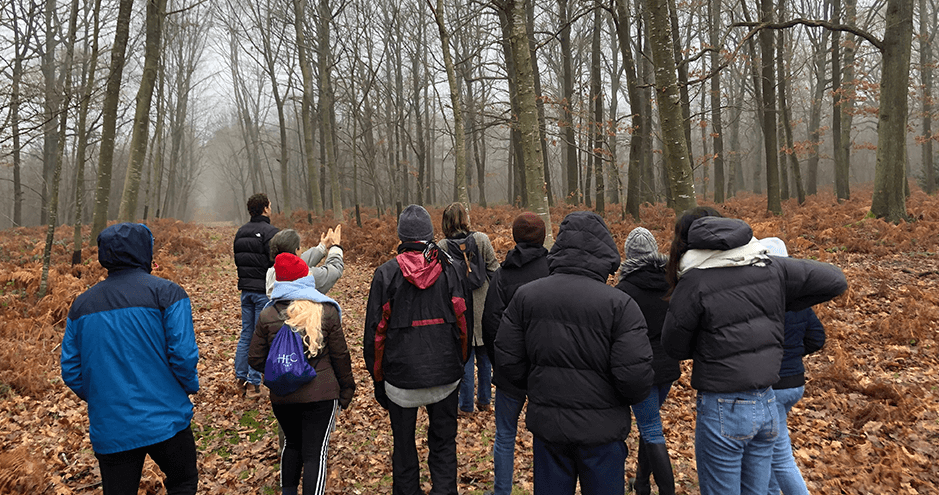 During the educational walk through the St. Remy forest, Solen Boivin points out some positive steps these past years: “This natural reserve has expanded since April 2021 to include these marches and “Rigoles” of Yvelines. It’s helped protect the local diversity and we’re seeing some species of birds, insects and plants start to return. Now, we need to work on awareness and educating the consumer. Nature is at our very fingertips here and we can be actors in preserving it by, for example, buying local products.” The veteran of 30 years points to the students ambling slowly to the RER train station on their way back to the French capital. “The youth are conscious of what’s at stake. They are curious, open-minded and are clearly aware of the importance of integrating biodiversity in the workplace.”

An evolution that hasn’t escaped the attention of the Academy organizers. At the end of the three-week course, the HEC alumni trio sent this conclusion: “Teaching biodiversity in the context of all HEC programs is to be developed and deepened. Looking back at our experience, we can see that the students were particularly interested by the questions of monetary valuation of services favoring nature preservation; calculating ecological and systemic impact; and the pathways that professional actors in the biodiversity sector take to address environmental challenges. Since these issues are fundamentally linked to the core teachings at HEC (economy, accounting, finance and management sciences), they cannot ever be ignored again!” 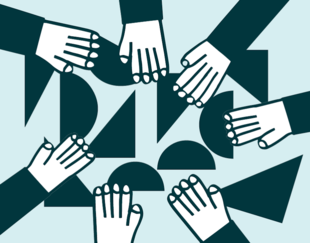 SDGs: Kick off your company’s impact

In the wake of the United Nations Climate Change Conference (COP26), HEC Professor of strategy Laurence Lehmann-Ortega along with her academic team shed a new light on companies and initiatives working in... 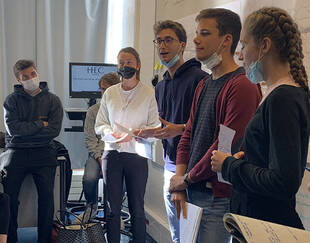 A transformative First-Year Experience in the New Course: "The Planetary Boundaries"

For the first time this term, a new mandatory course, “The Planetary Boundaries,” is launching the academic journeys of first-year students in meaningful, enduring directions. Society & Organizations (S&O... 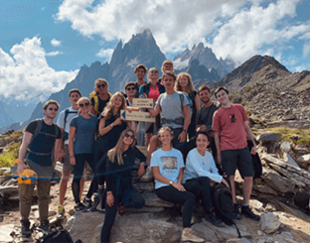 HEC Students Experience Purpose and Sustainability in the Alps

For the second time ever, HEC’s first year L3 students began their school career with the off-campus “Purpose & Sustainability” seminar. 370 freshmen converged on the Alpine village of Chamonix for a...