Around 600 people congregated in Paris’ gleaming Station F on November 21 for the first-ever HEC Entrepreneur Fest, a joint effort engineered by three of HEC’s Centers: Society & Organization (SnO), the Digital Center and the Entrepreneurship Center. This was a Tuesday evening devoted to the social responsibility, innovation and entrepreneurial spirit promoted by the Parisian business school. “Our role is to facilitate exchanges, to catalyze initiatives,” insisted Etienne Krieger, the Scientific Director of the HEC Entrepreneurship Center, “and this Station allows us to change dimensions, providing our students with an incredible platform. This festival consecrates our presence in this startup sector. At present we are aiming to have a global impact.” 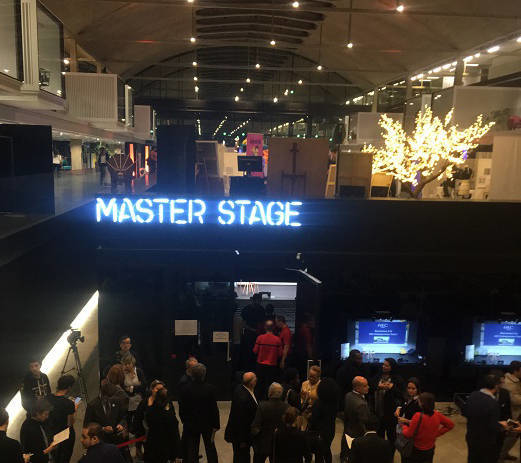 It has only been five months but already the world’s biggest startup campus has caught the entrepreneurial world’s imagination. The New York Times’s June 23 front-page headline article believed the refurbished train depot symbolizes France’s drive to “be the startup capital of Europe.” Wired said that, with “President Macron making all the right noises,”  Station F could soon become a major global hub: “Startups will always have Paris,” it concludes. The Financial Times, meanwhile, claims the campus “symbolizes the scale of France’s startup ambitions.” The British daily recorded “a growing momentum” towards making France “a country of unicorns”, with the nation’s investment hitting a record 2.2 billion euros in 2016, 13% up from 2015. “The building is becoming a microcosm of what’s happening in France,” it concluded.

Perched on this beehive’s second floor is HEC Incubator: 73 startups and 180 workspaces nestling in 700m² of open space, meeting rooms, isolated booths, beanbag chairs, coffee machines… and even table soccer areas. To mark the giant steps the incubator has made since its July opening, the school inaugurated a festival featuring a pitch competition, a startup village and prolonged exchanges between HEC’s leading donors. “This has been a fabulous moment for people to become aware of the fluidity of this venue, how it encourages creativity and network building,” commented one of several legal advisers who have been helping the start-uppers avoid the pitfalls of starting out.

Each of HEC’s three Centers presented a trio of startups which have been incubating at Station F since the July opening. “Our students are thriving on a tradition instigated at HEC right from the start by the likes of Pierre Bellon,” said Dean Peter Todd as he congratulated the three winners of the pitching competition. The founder of Sodexo, who built an empire at its head between 1966 and 2005, was present for the evening to witness the quality of the young HEC entrepreneurs. “One of our achievements,” continued Dean Todd, “has been to make sure that our students keep on coming to school once they’ve launched their enterprises! ”

For SnO’s Academic Director Rodolphe Durand, the event provided a timely platform to share his Center’s vision of a “more social capitalism” as encapsulated by the school’s Movement for Social* Business Impact program. At the Entrepreneur Fest, SnO presented a trio of young entrepreneurs doing pioneering work in schooling, employment and housing. “It’s essential for business schools like ours to measure and improve the social impact of the business world,” pursued Durand as he milled around the startup village featuring over 40 nascent businesses. “Our researchers and students are tackling the urgent needs to improve access to essential services. They are promoting an inclusive economy, poverty alleviation, environmental protection and challenges linked to diversity and global warming.”

The winner in this category, Neyb’s, crystallizes the spirit Rodolphe Durand hopes to infuse throughout the business world. Its founder, Hafida Guebli, sprang out of HEC’s expanding Stand Up program designed to accompany young women entrepreneurs from modest backgrounds in their quest to set up their companies. Guebli was elated by the award: “I know I have an unusual track record, but this makes me all the more proud,” she enthused. “I’d like to congratulate HEC for its open-mindedness in accepting our singularity, boosting entrepreneurs from all backgrounds. Unfortunately, not everyone shares this spirit.”

Neyb’s,” she continued, “has created a universal language for tenants and landlords to communicate their needs and problems. 7% of our French population are illiterate, our application’s pictogram solution provides them with the only means of communicating on their realities. It’s a solution we would love to provide the 75 million Europeans confronted with the same challenges.”

Breaking Down Business and Industry Silos

HEC Digital Center Director Julien Lévy is convinced such occasions are ideal platforms to showcase the talent being nurtured in the Incubator: “It shows our strength in innovation and entrepreneurship,” he said, in front of one of the 40 stands in the startup village, built for the occasion on the ground-floor of the former rail freight depot. “These pitching competitions are learning experiences for our young graduates, and they reflect just how well their years at HEC have prepared them for this leap into the startup world.” The startup his Center had nurtured, Skello, won the public vote in its category thanks to the innovations it is bringing to the restaurant world. “We are saving restaurants an average of 30 hours a month in management costs,” explained its founder Emmanuelle Fauchier as she graciously accepted the award. “We hope to expand our technology into the retail market.”

Meanwhile, the Entrepreneurship Center's prize-winner, Nicolas Régnier, is banking his technology will save millions of euros in the construction world. “Our Data Soluce company hopes to break down the silos in this industry,” he told the audience packed into Station F’s biggest auditorium. “It’s costing investors 15% of the total budget, mainly because the architects, engineers, construction workers, and so on, are just not communicating with each other,” hammered the former Bouygues engineer. 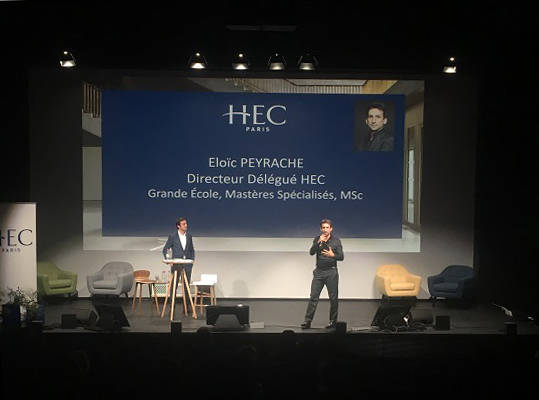 For HEC’s Associate Dean Eloïc Peyrache, the springboard provided to all nine finalists in the Fest’s pitching competition has arrived at an ideal moment: “These young entrepreneurs have matured in our Incubator,” he told the 400 people in the auditorium. “This is a crucial moment for them to step up, move into another dimension so as to create a niche in a highly-competitive market.” Indeed, the ecosystem of feeder and support groups provided by Station F is allowing the accelerators and incubators in the HEC facility to make healthy strides towards successful launches.

For all those involved in this first Entrepreneur Fest, 2018 has a promising ring to it.