HEC Paris and the Bouygues industrial group jointly launched the “Smart City and the Common Good” Chair. It will be headed by Professor Bertrand Quélin until 2023. In his October 12 online Masterclass, the seasoned academic shared his hopes for a Chair which combines research, teaching and employment opportunities. Quélin underlined its catalytic qualities, which aim to build a sustainable and inclusive urban society for the future. 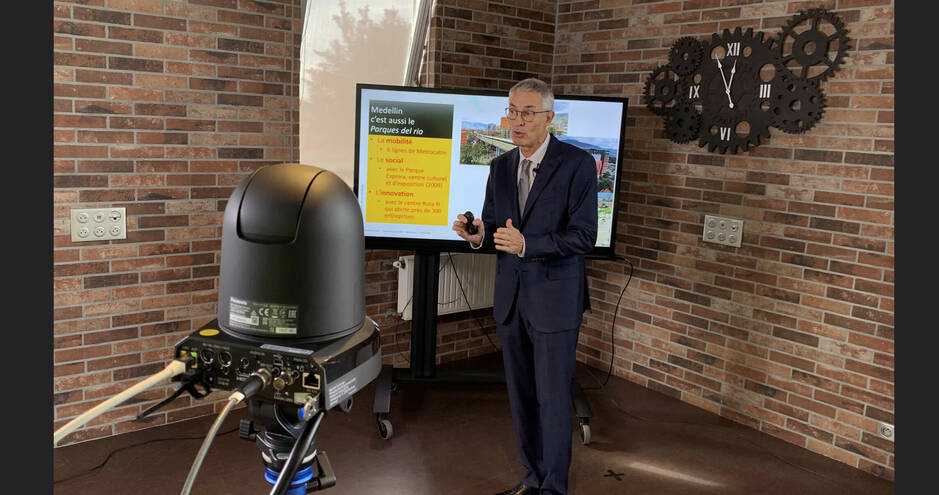 "This is not just about technology.” With these words, Bertrand Quélin summed up the pluri-disciplinary nature of the Chair’s approach to a “people-focused vision” of tomorrow’s smart city. The Chair he is forging - with the hands-on support of Bouygues construction/real estate/road construction/media/telecommunications group - aims at making these cities more sustainable and raising awareness about the quality of careers within these urban spaces. “Smart cities must be resilient and inclusive. They must touch on the social and collective dimensions.” In many ways, Quélin’s words echoed those of the First OECD Roundtable on Smart Cities which took place last year.

In his half-hour presentation, the specialist in economics of organization pointed to the successes of some of the ongoing smart-city projects, ranging from those in Dijon or Lyon, France, to the one transforming Colombia’s second city, Medellin. Quélin defined the research he and HEC Paris students have begun on six smart cities which will scrutinize the intersections between the principle actors in the fields of health, mobility, housing, energy, transport and governance.

“Let’s not kid ourselves, the challenges faced by organizations, be they private, public or non-governmental, are colossal,” he added. “In the context of the current upheavals, we are being asked to provide more with less. We must answer the pressure to go beyond the short-term in building a long-term, adaptable and durable quality of living. The focus on six smart cities (Amsterdam, Barcelona, Copenhagen, Singapore, Toronto, and Vienna.) has already provided us with one lesson: that there is no unique model and each city has its own specificities that must be incorporated.”

For inspiration, Bertrand Quélin shared his two major inspirations: Robert Reich (“The Common Good”) and Nobel-laureate Jean Tirole (“Economics for the Common Good”). These world-class economists defined the policies needed to surpass the interests of each party and establish rules that delineate effective collaboration in building the smart city of tomorrow. Cities such as Medellin and Brest have founded their prize-winning policies on soft mobility, rehabilitation of dilapidated neighborhoods and better access. The former was rewarded the Lee Kuan Yew World City Prize in 2016. Its formerly gang-ridden Comuna 13 district is beginning to become a tourist hotspot “thanks to smart city projects which include burying a four-lane highway under a park!”

Such imaginative solutions to the problems provoked by urban pollution, social exclusion, energy wastage and over-population will be at the heart of Quélin’s research in the three coming years. But the Bouygues Chair is not only about research. “We are also prioritizing teaching, training sessions, job promotion and joint HEC-Bouygues events.” These will include initiatives involving the HEC Paris community itself. Much will emanate from the Society & Organizations Institute and its 50 fulltime researchers who are intricately involved in the Chair’s research drive.

?️ In conjunction with the launch of the “Smart City and Common Good” Chair by HEC Paris and @GroupeBouygues, Isaure Fraissinet @HECParisMasters @HECParisSASI graduate, talks to us about the challenges in creating and implementing a #SmartCity strategy #HECxBouygues @HECParisSnO pic.twitter.com/BNmh9hLi1W

But there is also the commitment to smart city startups incarnated by HEC’s incubator at Station F. Quélin quotes its director Antoine Leprêtre: “We have decided to place our incubator at the heart of this revolution,” says the Paris-based innovator, “by instigating a vertical structure in Station F’s ecosystem devoted to smart cities’ key industries.”

In closing, Bertrand Quélin, listed the ultimate goals he hopes to see incarnated in the smart city: “The reduction of our carbon imprint, CO² emissions and the artificialization of the ground; contribution to the health of its population by eliminating what pollutes it; the development of forms of gentle mobility; construction sites which aim at autonomy (in energy, water, detritus) and positive energy read-outs; the vegetization of urban spaces; and the promotion of proximity and intermodal activities.”

These objectives can only be reached by preparing HEC Paris graduates to manage the sea-changes which the digital revolution is offering for the millions of urban residents. For Quélin, the smart city policies encouraged by the Bouygues Chair will only come to fruition if they are designed, monitored and instigated as a tool to improve well-being for all its urban dwellers.