How Can Impact Investment Satisfy both Societal and Business Needs?

2018 has seen renewed interest in impact investment and its potential for growth in expanding the capital available to address social & environmental issues. On October 10, the annual plenary session co-organized by HEC’s S&O Center, the NGO Action Tank Entreprise & Pauvreté and the European Venture Philanthropy Association (EVPA) focused on a theme which has become a catch-all. The underlying question: can impact investment satisfy both societal AND business values simultaneously? 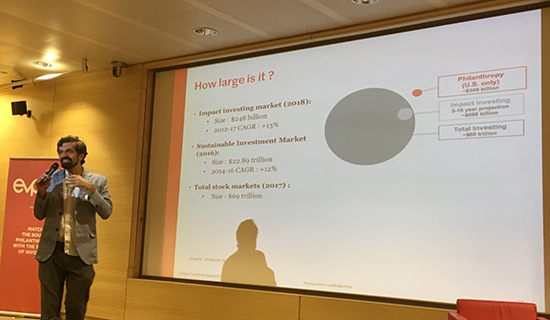 “Impact investing is the equivalent of social entrepreneurship, in the world of investments. It refers to investments that seek both social and financial goals,” noted Afshin Mehrpouya in the opening remarks of his keynote presentation to a body of professionals gathered at the Banque Postale headquarters in the French capital. A former medical doctor in his native Iran, Mehrpouya is an HEC Paris Associate Professor of accounting and management control systems researching the role of performance measurement in transnational governance. He was invited to the Action Tank plenary session to present a state-of-affairs on a concept born officially in 2007. This date marked a conference organized by the Rockefeller Foundation where impact investing was coined. “They wanted to move this form of investing out of the space reserved for foundations and development agencies and into mainstream investments,”  Mehrpouya explained. “There was also a desire to aggregate all the different forms of investments that combined social and financial focus into one category and movement.”

Emmanuel Faber outlined how the Action Tank has created several development models, but all converge to incarnate the positive aspects of impact investing. “We are witnessing a series of experiments which are unique in the world,”  said 1986 HEC Alumnus and current CEO of Danone. “This comes with an eye towards achieving the objectives set out by the  2030 UN Agenda for Sustainable Development   and the commitment by the OECD towards policies incarnated in their  Business for Inclusive Growth program .

The Action Tank has been working with several French municipalities on programs aiming for better social housing, home renovation, professional mobility, insurance and eye care services. 2018 saw the internationalization of its models, with Action Tanks sprouting up in Brazil, India and, especially, Senegal. But, to date, its most impactful work centers on a project in the Greater Paris region called Programme Malin.  This fosters a collaboration between public and private entities designed for poverty alleviation. “The program is about to go national,”  said the former French High Commissioner for Active Solidarity against Poverty, Martin Hirsch. The ex-head of Emmaüs France added that the government has announced that the program is to be part of its global strategy to tackle poverty in France. “Its national deployment will be completed by 2022.”  The current director of Hôpitaux de Paris (AP-HP) and co-president of the Action Tank with Emmanuel Faber continued: “We are to use these models as levers to resolve the poverty issues that the authorities haven’t been able to.”

Emmanuel Faber insisted that the Action Tank’s projects resolve the concern over social responsibility and profit: “There is no contradiction between having an 18-20% rate of return and investing in social actions. Yet, in France, social impact projects struggle to establish themselves, including in the public domain. That is because leaders consider that these are high risk programs where money can be lost. We must explore ways for the private sector to develop its social impact projects.”  Faber and Hirsch had written to the authorities proposing a partnership between the French government and a dozen major companies, in a program aiming and reducing the cost of goods and services for families below the poverty line.

In his presentation, Afshin Mehrpouya reminded the audience that impact investing as a concept has been somewhat fragmented and confused, partly due to its outstanding success. The strength of this label “has led to its use by many companies and investors in different ways and, to be frank, it’s messing up this space! This blurring has led to confusing understandings of the field, its size and its potentials/impact”.

Despite its “blurred edges”, impact investing has been transformative in the fields of development financing and aid as well as in commercial investments. “The mission is to invite the vast pools of capital in the financial markets to address matters of public concern,”  Mehrpouya explained. The past five years has seen a rapid expansion in impact investors, especially among traditional asset owners, asset managers and High Net Worth Individuals.

But which space can impact investment occupy? This was the question that an international panel debated at the conference. According to the EVPA’s CEO, the charismatic Steven Serneels, only a long-term approach can provide the space needed for impact investment to be effective. “A comprehensive and holistic approach takes 5 to 7 years to bear economic and social fruits for all those involved,” he insisted. “Social disruption hampers business. That’s why big corporation will end up embracing social inclusion.”  Serneels is himself the chairperson of a social impact fund which unlocks the potential of entrepreneurial farming in the South. He pointed to research by Harvard University and London School of Economics revealing that the front-runners in sustainability and impact investment are more successful “if they adopt the right time-horizon. Unfortunately,”  pursued the Chairperson of the Task Group Corporate Initiative, “major corporations don’t know the beneficiaries, that’s why social incubators and accelerators can guide their policies.”

According to Afshin Mehrpouya, the marriage of the social and financial through impact investing has been fairly successful so far - but it has also led to a range of fundamental questions and concerns. Investees are cautious about the motivation and approach of some mainstream investors, many of whom are financially focused and have rarely dealt with social issues. Furthermore, investees and the beneficiaries complain that their voices are rarely heard when defining social impact objectives and measures. “There is also questioning of impact investing entering highly sensitive areas involving marginalized populations and public goods.. Can you impose financial obligations on social projects in areas such as biodiversity or primary education, without disruptive effects on the underlying projects?”

For the HEC academic, there are five areas where there should be a good fit between the investor and investee for impact investing to be successful: alignment of social/financial return expectations; alignment of the time horizon; a well thought-out and non-disruptive exit strategy by the investor; and the level of control sought by the investor; and, crucially, a clear and shared idea of social impact driven by the views and real needs of the beneficiaries.

Overall, the event organizers deemed very satisfactory the level of exchange between the panelists and participants at the plenary session in the Banque Postale HQ. Action Tank director Jacques Berger nevertheless hopes the 2019 gathering will bring together sharp contrasts between the participants and forge a clear definition of what impact investment can bring both to the business world and the society at large.