HEC Paris Professor and AXA Chair for Decision Sciences Itzhak Gilboa has been elected an “International Honorary Member”  of the prestigious American Academy of Arts & Sciences. The specialist in decision theory thus marks his ten years in the business school as one of only 36 international scholars, business leaders, philanthropists and artists to be inducted in the Academy this year. Founded in 1780, the US institution based in Cambridge, Massachusetts convenes leaders from the academic and business sectors to address “critical challenges facing global society”. 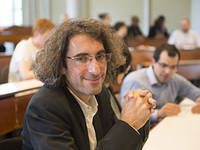 Itzhak Gilboa’s prolific career includes groundbreaking work on the theory of Maxmin Expected Utility which explains individual attitudes towards ambiguity. The American Academy was also drawn towards his contributions to decision science with published works on decision-making under uncertainty and the theory behind making better decisions or rational choice. The Paris-based academic is also known worldwide for his work on game theory and microeconomics.

He becomes only the fifth person in France to win a membership to the Academy, joining Jean-Michel Grandmont, Roger Guesnerie, Guy Laroque and Jean Tirole in this rarified circle.”I realize from the reactions around me that this is quite a prestigious institution,” the 55-year-old said with his characteristic modesty after the April 19 announcement was made. Indeed, in the 238 year history of the Academy, there has been only 40 International Honorary Members in economics.

From D-Tea to American Academy

“I would like to congratulate Itzhak on this remarkable recognition,” declared HEC Dean Peter Todd. “It is a true testament to his scholarly achievement and reputation.” Four years ago, Gilboa received the 2014 Research Award from the HEC Foundation for having published the largest number of articles in the best international academic (‘alpha’) journals. He previously held positions at Northwestern University’s Kellogg School of Management and Yale University’s Coles Foundation.

Itzhak Gilboa is to be inducted into the Academy in October 2018. Meanwhile, on May 23, he is to once again co-organize the highly-prestigious D-Tea workshop (Decision: Theory, Experiments and Applications) in Paris which this year features talks by Ariel Rubinstein, Botond Koszegi, Andrew Postlewaite, Ariel Rubinstein, Aldo Rustichini, Larry Samuelson, and David Schmeidler, amongst others. This annual event promotes dialogue between theory, experimental findings and applications, bringing together researchers who work in similar fields and questions.