HEC Paris welcomed 11 new research professors to its faculty ranks for this new academic year, one of the richest pickings in years. The top-class scholars join seven of the school’s nine departments, swelling HEC’s total of professor-researchers to 120. 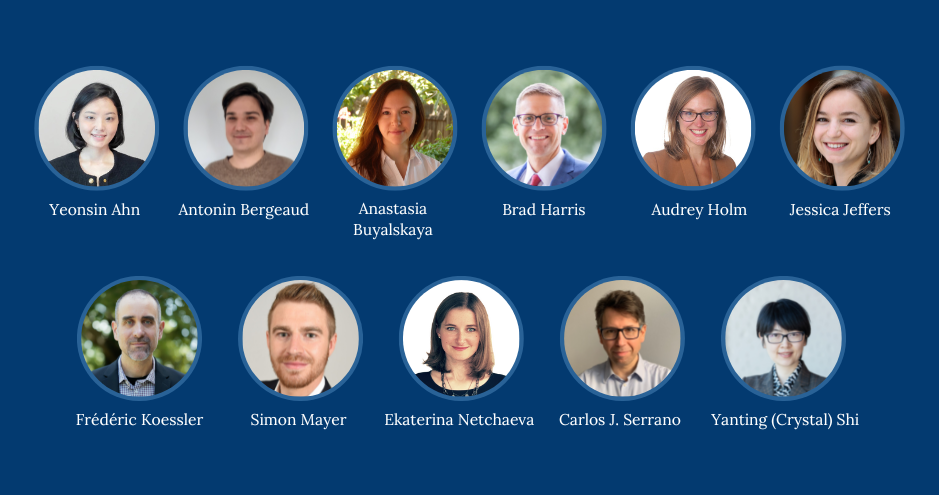 The arrival of a dozen academics from some of the world’s best institutions is indicative of the school’s accelerated drive towards a research institute to rival the best. The new HEC professors hail equally from Europe and North America (four and five respectively) with two more researchers from Asia. Three have joined the school’s Management & Human Resources Department, including Ekateriana Netchaeva, who is currently working on gender difference in leadership aspirations.

Netchaeva is joined in the department by Audrey Holm who just completed her PhD at Boston University. The latter’s research interests include occupations and inequality: “For example, I’m examining the work of counsellors specialized in helping formerly incarcerated jobseekers.” Alongside them both is Brad Harris whose research interests include the COVID-19 pandemic’s potential effects on workers’ collectivist values. His research has featured in mainstream media such as HBR, the New York Times and NBC.

The COVID-19 impact could spill over into research conducted by Anastasia Buyalskaya, newly arrived in the Marketing department, with a PhD from Caltech under her arm. The behavioral scientist combines empirical and experimental research methods to understand consumer behavior in natural settings, including the use of new technologies to better measure and understand decision making. Technology also plays a role in the research by Associate Professor Carlos Serrano from the Economics & Decision Sciences department. His research in innovation and entrepreneurship investigates the value and use of patents for technology startups.

Startups and their culture have been fascinating Yeonsin Ahn for years. Freshly graduated from the INSEAD PhD program, Ahn is researching the ways startups end up replicating their former company’s culture... “even if they brag about creating their own culture,” she adds with a smile. Meanwhile, Yanting (Crystal) Shi, of the Accounting & Management Control Department, has been plunging into the world of hedge funds, where her research shows their interventions have “a positive impact on labor efficiency”. A new paper by Shi also looks at investors’ response to the #MeToo movement asking: “Does corporate culture matter?”

HEC Researcher Numbers on the Rise

Clearly, corporate culture and its role as an implicit contract does matter to Jessica Jeffers of the Finance department, freshly arrived from the University of Chicago. Jeffers is working on a paper showing that firms with greater connectivity “are less sensitive to changes in explicit labor contracts.” The role of connections amongst co-workers, she explains, are a measure of employee culture. Fellow-colleague Simon Mayer, meanwhile, focuses his research interests on corporate finance and both cryptocurrency and blockchain fintech. Incidentally, Mayer will join forces with HEC Associate Dean of the Ph.D. program Johan Hombert in organizing the school’s fourth entrepreneurship workshop in December.

Finally, on top of Carlos Serrano, the Economics & Decision Sciences department welcome professors Frédéric Koessler and Antonin Bergeaud. The former specializes in communication and information transmission and behavioral game theory, among other theoretical and mathematical research fields. Whilst the latter’s interests center on income inequality, human capital and long-term growth. Bergeaud is currently working on a paper analyzing the rise of China’s technological power.

The 11 researchers represent almost a 50% increase in the number of researcher professors HEC recruited last year and more than double the number arriving in 2020. “We have been welcomed warmly and are delighted to be here as part of a dynamic research community,” said Ekaterina Netchaeva, settling into her new office in V building.