The 13th D-TEA was tinted with sadness as it paid a ringing homage to HEC Professor Philippe Mongin, who passed away shortly after last year’s conference. The French economist had built on the utility theories spawned by John Harsanyi, before engaging his theories in the judicial and political arenas.  D-TEA 2021 was devoted to the notion of Determinants of Utility, much inspired by Mongin’s legacy. 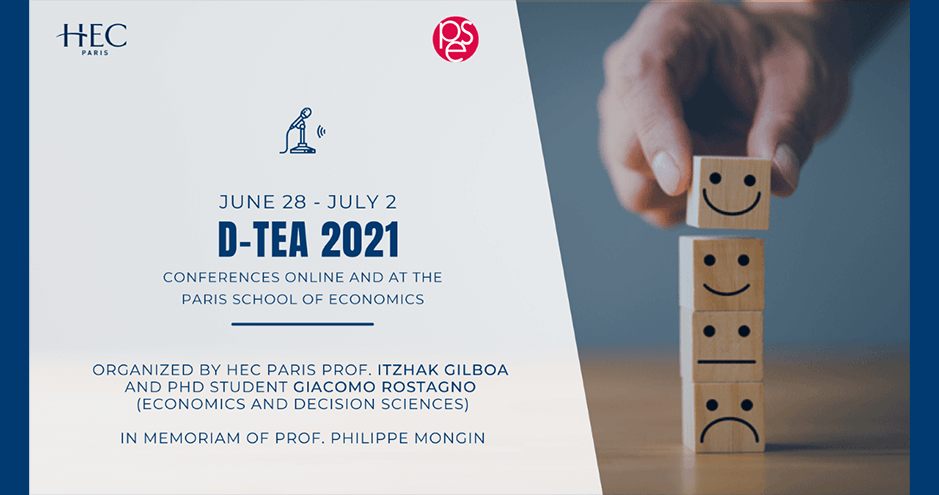 “He was a very dear friend, a deep thinker, and he showed amazing inter-disciplinary skills.” D-TEA co-organizer, Itzhak Gilboa, spread out his arms as if to illustrate the depth and width of knowledge Philippe Mongin had left behind in his 50-year career. The two academics were working on several incomplete projects when the French economist died in August 2020, at the age of 70. “Philippe was something of a Renaissance man: a great expert on Napoleon’s battles, a specialist in game theory, his work on Nobel laureate Maurice Allais was remarkable and he produced important results in the mathematical field. Personally, I was mostly influenced by his work revealing the limitations of John Harsanyi’s famous support for the notion of maximizing the sum of utilities. A generation of colleagues and students, of which I was a part, followed up on this, trying to cope with Philippe’s “impossibility” result.”

Itzhak Gilboa and fellow organizer Giacomo Rostagno worked several months to prepare the D-TEA workshop (Decision: Theory, Experiments, Applications), which kick-started on June 28. In these five days, 50 top researchers shared their latest studies on decision sciences. Held in hybrid form at the Paris School of Economics, Gilboa described this year’s theme on utility as an intersection between psychology and economics: “This utility theme focuses on the idea of how people make decisions to be happier, which is measured by the utility function concept invented three centuries ago by Daniel Bernoulli (in 1738, ed.). This Swiss mathematician suggested that we measure the welfare, or satisfaction of a person by a mathematical function, which is at the heart of economic analysis to this day. Our question is: what goes into this notion? Utility is a technical term, and in standard textbooks it is considered a “black box”, describing how our choices are made. But for many questions, both positive and normative in nature, one needs to ask what is inside the box, what determines this mysterious ‘utility’.”

As with every year, the selection committee, comprised of Itzhak Gilboa and seven fellow academics, had the difficult task of finding a subtle balance between theoretical papers and experimental applications. Researchers had 25 minutes to share their studies that ranged from model and predictive uncertainty, to Bayesian social aggregation, and the notion that all probabilities are equal – but some are more equal than others. “Once again, it’s proved to be a remarkably high level of academic research,” said Gilboa. “I was particularly impressed by the work of Indira Puri. Her research, under the supervision of Drew Fudenberg at MIT, on the theories of choice under risk is fascinating: Indira shows that a heterogeneous agent model can come close to matching machine learning performing. We are hoping to link such concepts with computer science in our next D-TEA.”

The holder of the AXA Chair in Decision Sciences will also aim at focusing the 2022 D-TEA workshop on complexity. He will be planning this with fellow-HEC academic Stefania Minardi: “We will be linking this to what’s going on in computer science and machine learning. We’ll be discussing models of how people make decisions, or we’ll benchmark how people might be doing so.”

Along with HEC graduate Fan Wang, the two HEC teachers have been researching the consumption of values, a study which has given birth to a paper of the same name. At this D-TEA, their work was presented by Stefania Minardi and praised as one of the outstanding contributions of these five days. “This research centers on our growing awareness that values are not just focused on material consumption,” Gilboa explained. “There are also issues of sustainability, concerns over child labor - as in the famous case of Nike shoes -, carbon dioxide emissions, and so on.”

The senior professor turned to Max Weber to describe these new consumer behaviors: “There’s a distinction between intrinsic and instrumental values. We claim that these are differences you can tell in one’s choices. Let’s say I’m a vegetarian and you tell me the dish I’m invited to eat has one gram of meat. I’ll reject it automatically, or I become a non-vegetarian. However, if I care about plastic bags damaging the environment, I should be aware that they do so via a complicated mechanism. Where plastic bags are is not a matter of a value in and of itself; we care about it only because, eventually, plastic bags hurt animals like dolphins. And this makes things continuous. Even if I care about dolphins, I might say, ‘OK, but this is, after all, just one plastic bag.’ As researchers, we say that, in consumer preferences, one can tell if a value is more intrinsic (the vegetarian) or more instrumental (the plastic bag) by asking whether consumer’s behavior is “continuous at zero quantity”, that is, whether one gram makes a huge difference or not. This distinction is important because, for many policy decisions, you need to know what people “really” care about. When values are intrinsic, we, as a society, have to respect them as they are; when values are instrumental we may try to think of various ways of respecting the intrinsic values that are in the background.”

Such research is another example of the workshop’s commitment to transforming hardnosed theoretical concepts into tangible experiments and political or societal expressions. Something that Philippe Mongin devoted much of the latter part of his career to, and which earned him France’s Ordre National de la Légion d’honneur.