#GoClarisse: HEC Paris Graduate on the Starting Line for the Vendée Globe

The ocean breeze can lighten the pressure of the past week’s world news. On Sunday, November 8, 33 skippers embarked on the Vendée Globe, sailing’s biggest round-the-globe race that’s solo, non-stop and without assistance. Amongst the starters is Clarisse Crémer (H13) at the helm of the IMOCA-style monohull sailboat Banque Populaire X. The entire HEC community is behind Clarisse for this mythical race! 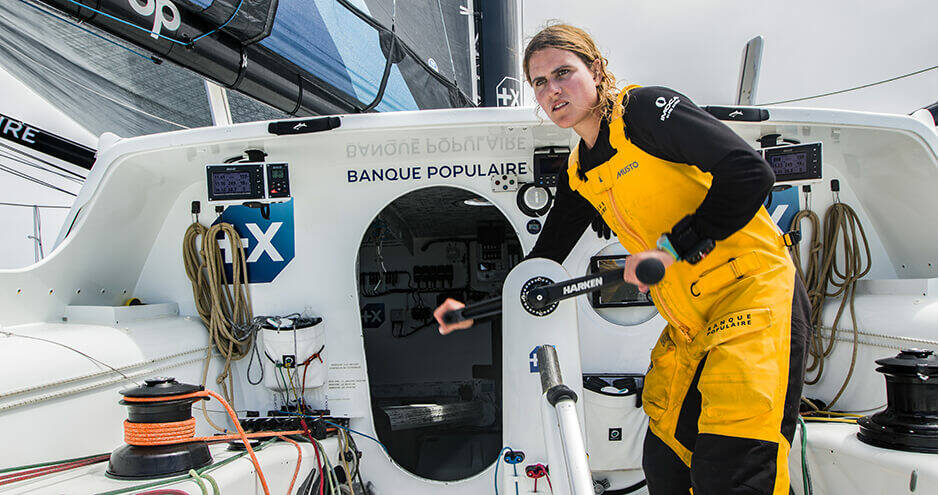 “Could I have dreamt this up? Never!” With tenderness and admiration, Clarisse Crémer’s mother reminisces in the course of a video broadcast by her daughter’s sponsor, Banque Populaire. “When Clarisse went to kindergarten at three years old, the other kids would sometimes walk on her feet. I would tell Clarisse: ‘You know, you have to be a fighter in life.’ I never imagined that that piece of advice could take her so far!” Indeed, back then nothing predisposed Clarisse Crémer to become one of six women (a record for this ocean race) on the starting line for the 2020 Vendée Globe.

Born 30 years ago in Paris, Clarisse Crémer entered HEC Paris after a science baccalaureate and preparatory class. This classic path led her to an entrepreneurial vocation. It culminated in the creation of the Kazaden.com startup with her brother, specializing in online reservations for exceptional outdoor holidays. At the time, sailing was merely an old passion for Clarisse, reserved for holidays and weekends in Brittany.

Clarisse’s first major ocean race was with what she calls a “small boat” (a 6m50 sailboat) she used for the 2017 Mini Transat race. Just happy to be on the sea, she did not follow the rankings of her competitors and concentrated on her race: “When I reached the finishing line, I was taken aback to find out I was on the podium (third and second at every stage)! Psychologically, I had prepared myself to be last… I couldn’t believe my eyes!” Such a dazzling and unexpected first success for Clarisse turned her world upside down – until then, she had never imagined that sailing would become her profession. Everything simply accelerated after that.

On the Road to the Vendée Globe

Having completed the Mini Transat, Clarisse continued to meditate on the best path to pursue, all the while participating in the Transat AG2R with her companion Tanguy Le Turquais and the Solitaire du Figaro race. It was at this moment that the Team Banque Populaire director Ronan Lucas contacted Clarisse and asked her to become skipper of the Banque Populaire X, an 18m long sailboat.

Clarisse Crémer took her time to reflect, learn and slowly discover her new boat. She met Armel Le Cléac’h who showed her how to maneuver this IMOCA (Armel Le Cléac’h won the eighth edition of the Vendée Globe in 2016-2017). They sailed together for the Transat Jacques-Vabre and finished sixth, an excellent result.

The Vendée Globe is now Clarisse Crémer’s next challenge. She is following in the footsteps of another HEC Paris graduate, Jean-Pierre Dick, who’s competed in the race three times. Clarisse has declared herself ready to push back her limits, whilst admitting she will be facing difficult moments. Her determination is undeterred, however: “Every molecule in my body and mind is mobilized for this challenge. I’m as frightened as I am excited.” The entire HEC community has been called on to track this sporting challenging by clicking on the hashtag the sponsors have set up to follow Clarisse Crémer: #GoClarisse !.