September saw the kick-off of a one-year countdown towards a new Entrepreneurship Master, born out of the partnership between Beirut’s Ecole Supérieure des Affaires, HEC Paris and the Chambre de Commerce d’Industrie de Beyrouth et du Mont Liban. The three-party accord, signed on June 21 2017 at the Paris Chamber of Commerce (CCIR), gives birth to a Master taught entirely in English. It will be inaugurated in September 2018 on the Clemenceau campus at the heart of the Lebanese capital. 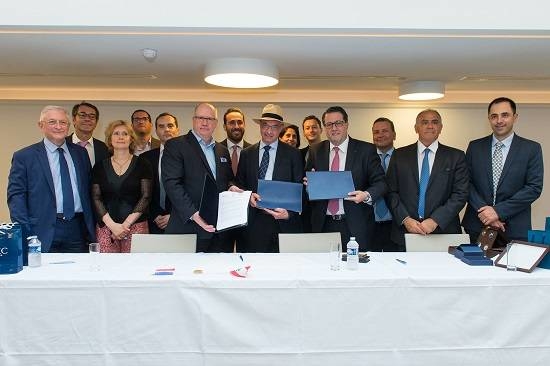 “I’ve been working on this collaboration for ten years and I cannot hide my pride at having participated in creating this project.”  Nicolas Boukather, president of the HEC Alumni in Lebanon, described his experience with emotion to the guests at the CCIR of Paris-Ile-de-France, the venue chosen to sign the three-party general accord between HEC Paris, ESA and the CCIA of Beirut and Mount Lebanon. “This pedagogy will reinforce Lebanon’s position and major role in the growth of entrepreneurship in the region,”  added the HEC 2007 graduate.

The new Master program will be built around the pedagogical model that HEC Entrepreneurship has forged over the past 40 years. It is to be co-directed by the current Scientific Director of HEC Entrepreneurs MSc, Alain Bloch, and Joseph Nehme, Affiliate Professor at HEC since 2010. Thanks to the latter’s knowledge of entrepreneurship in both countries, the partnership has been speedily finalized. “What is most important,”  insisted Joseph Nehme, “is the creation of an entire ecosystem inspired by the one we have established at HEC.”

The program will join the eight other Masters taught to ESA’s 500 students by an international team of professors. This latest degree also aims at bringing together future business leaders from Lebanon, France and beyond. “We wish to transmit our very own brand of “Learning by Doing” ,” explained HEC Paris Dean Peter Todd, “in order to offer our expertise not only to ESA but, more generally, to Lebanon and the region. This program aims at developing the entrepreneurial culture of this country, its startups and its innovation.”

ESA Beyrouth was born two decades ago out of a dream by Fayek Abillama, former president of the HEC Alumni in Lebanon. Right from the start, the business school opened itself out to international input. According to its Dean, Stéphane Attali, this global approach has been key to the school’s success: “Half of the students enrolled in the MBA are non-residents who bring investment and employment to Lebanon. The world-class standards offered by ESA and HEC Paris will reinforce this dynamic.”

ESA’s academic director Maxence Duault underlined the strategic importance of the partnership with HEC Paris after a ten year absence from the Lebanese capital. “HEC’s involvement with us is fundamental for Lebanon,”  he underlines. “One of ESA’s co-presidents, Riad Salameh, is also the Governor of the Banque du Liban and he recently passed an official notification aimed at developing entrepreneurship, start-ups and digital initiatives, in order to bring Lebanon into the 21st  century. This accord comes at an ideal time as it reinforces this commitment to progress.”

Since ESA was founded in 1996 it has played a major role in training managers and business leaders in Lebanon and the Middle East. As the only institution with AMBA accreditation (the highest international distinction for MBA and EMBA programs), the school draws on an extremely dynamic local entrepreneurial culture. The Global Entrepreneurship Monitor, has classed Lebanon fourth in its table of world’s top entrepreneurial nations. “The Lebanese have a very developed creative fiber,”  insists Stéphane Attali. “Entrepreneurship is in the country’s DNA and government authorities wish to contribute to the development of businesses by supporting the partnership between our two schools.”

With this latest ESA-HEC Paris degree, France and Lebanon hope to provide yet more educational possibilities to an institution which is recognized throughout the Arab world for the quality of its higher education.