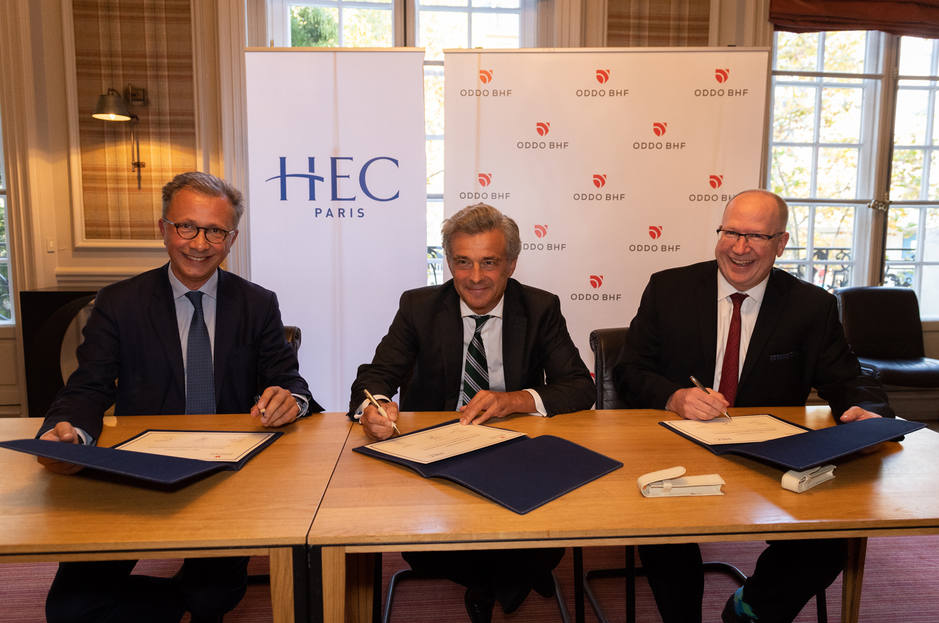 Philippe Oddo did not hide his satisfaction as he joined Dean Peter Todd and HEC Foundation President Bertrand Léonard to sign in the latest HEC Chair. “This is the perfect conjecture for such a partnership,”  confided the Managing Partner of the Franco-German financial services group. “ODDO BHF has grown significantly to reach a size where we can make a real impact on the financial world. Now, we rely on this HEC partnership to scale up and accompany what we see as a financial turning point, as markets evolve in sectors like artificial intelligence.”  The company stretches back over 160 years and currently looks after 600 securities, half of which are in France and Germany.

The Chair was formally signed on September 17  and is the second major partnership agreement in 2018 between HEC Paris and a German enterprise. It closely follows the July accord with German carmakers Volkswagen aimed at boosting programs on gender, diversity and sustainability. This point was underlined by Peter Todd who insisted on how proud he was in helping to set up a Chair which, in his own words, “will strengthen the extremely close links between HEC Paris and Germany, one of our strongest European partner in terms of student numbers and engagement. This Chair,” he pursued, “will provide a margin of excellence, certainly on an academic level, but also on a corporate one.”

There was satisfaction all round at the informal after-signing cocktail where HEC Dean Emeritus Bernard Ramanantsoa had two reasons to toast the Financial Analysis Chair. “Obviously, I’m delighted for the school as it finds new ways to develop finance programs which have already been recognized as world-class,” said the former Dean. “And, as a member of the ODDO BHF supervisory board, I’m convinced that this accord will guarantee the company’s future by opening up to new financial approaches to analysis. I’ve been closely involved in helping grow this company, one of the Europe’s strongest in advising on asset management as well as corporate and private banking. It’s not too often that these two worlds of mine converge in such a way.”

HEC Associate Professor Alexei Ovtchinnikov did not hide his delight at being nominated by his colleagues as Chair-holder. “This is an incredible honor,” he told the audience gathered at the ODDO BHF Paris headquarters. “I feel deeply humbled, and am very much looking forward to starting the work linked to the Chair. Beginning in January 2019, this will concentrate on setting up an ODDO BHF Academy to introduce students to the world of banking.”

After the ceremony, Ovtchinnikov, who is the current Academic Director of the Master in Finance (ranked world number one by the Financial Times), elaborated on the role the Chair’s Academy will have: “At the moment, HEC offers different programs on sectors like wealth management, trading, corporate financing, and so on. This academy will bring them together as part of a cross-functional approach. By analyzing a single case, we’ll study the world of banking through different angles. I’m convinced it will further galvanize the students and staff in both the education and research departments.”

A faithful and influential figure at top HEC events is Henri Ghosn, CEO at Société Française de Gestion & Investissement and Chairman at Club Finance HEC. Ghosn entered the business school at Jouy-en-Josas in 1981, the same year Philippe Oddo arrived, and he underlined the forward-looking nature of the HEC-ODDO BHF accord: “We’re living through challenging times for Europe, and these win-win partnerships are all the more important in the current climate: they show how finance can once again bring together institutions from different nations at the heart of a pro-European vision. This Chair will be a success at all levels: human, industrial, political and regulatory.”

Philippe Oddo insisted the Chair will meet both his company’s aim to grow its business and to recruit 100 young talents residing in France and Germany. The cooperation will be further boosted by a November 20 meeting in Frankfurt with Germany’s HEC community. Current teams at ODDO BHF host between 20-25 HEC graduates whilst over 35 students have enjoyed internships at the broker.