The German carmakers Volkswagen sealed a growing French-German relationship with HEC Paris by joining the school’s Foundation. It will contribute with different programs focused on diversity, which include scholarships for women and for German-speaking students. The June 21 ceremony was sealed by Professor Thomas Edig, Member of the Board of Volkswagen Commercial Vehicles and HEC administrator, HEC Foundation President Bertrand Léonard and HEC Dean Peter Todd. 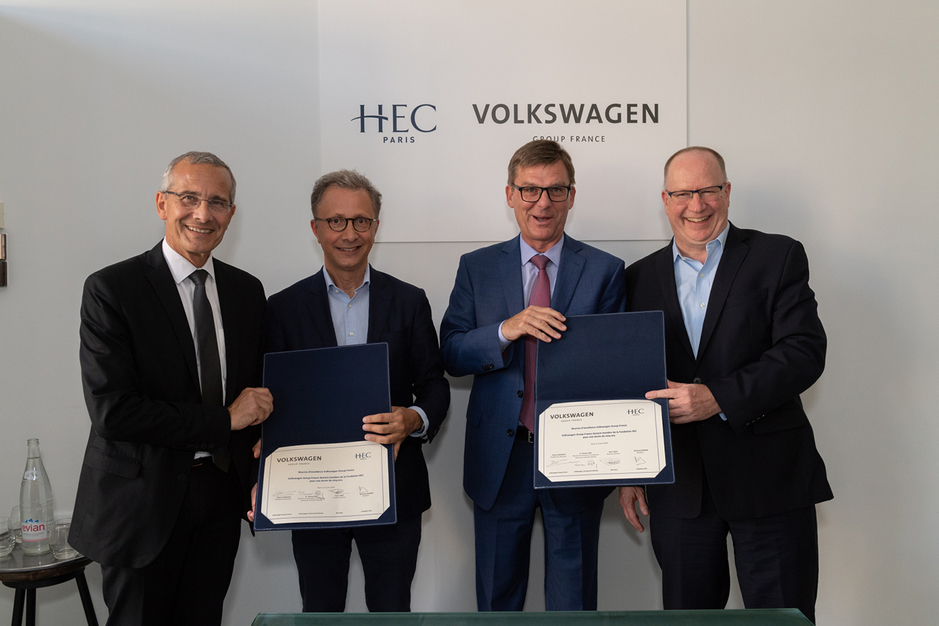 “Jamais deux sans trois,” is an old French saying and some could call it a hat-trick of partnerships scored by just one man. Thomas Edig has been a strong supporter of HEC Foundation ever since he met former Dean Bernard Ramanantsoa in 2004. That same year he came aboard the school’s international advisory board and, within 12 months, persuaded his colleagues on the Board of Alcatel to join the Foundation. In 2013, as Board member of Porsche, Edig helped set up a partnership with Porsche. “Today’s accord makes three,” he said with a smile, before insisting that it was HEC’s ability to form students for a more sustainable and gender-friendly society which has made him so faithful to the school. “HEC is a premium partner in training the global leaders of tomorrow,” he said, noting that Volkswagen becomes the third German company to join the Foundation. “This development reflects a growing interest for HEC amongst German students,” he continued. “Ten years ago, they were only a small minority in Jouy-en-Josas. Nowadays, with over 100 German students a year, they represent the biggest European contingency after the French. They have become aware that HEC is among the world’s top ten in its field, and I’m sure their numbers will grow.”

HEC Dean Peter Todd underlined the values shared between the German car manufacturer and the business school. “The fact that you are sponsoring women to go through our programs reflects our common vision of gender balance in industry. It is critical for the development both of our school and your sector, and we must cultivate this complicity.” Bertrand Léonard insisted on Edig’s long-term commitment to HEC. “This is a very moving moment for me,” he told those gathered at the Foundation headquarters in central Paris, turning to the Volkswagen director. “It brings back those long nights we had discussing ways of reinforcing our community. Thomas, you have been consistent in your support of our common objectives and this accord creates a unique model: it’s the first which backs grants specifically devoted to one sector, in this case gender.”

The partnership was signed just ten days before former French minister and Holocaust survivor Simone Veil was buried in the Paris Panthéon. Now, one of Germany’s top companies, Volkswagen Group, and HEC Paris have committed themselves to an accord devoted to reinforcing French-German ties and promoting future women leaders through an ambitious five-year scholarship program.

Coincidence perhaps, yet the words pronounced by those involved in the partnership echoed Veil’s lifelong struggle for women’s rights and European reconciliation. “For decades, the car industry has been synonymous with machoism,” declared Thierry Lespiaucq, President of the management board of Volkswagen Group France. “It is one of the reasons why HEC graduates shied away from this sector in the past. We have made parity one of our priorities to redress this iniquity. This has been made easier because the world has changed. At Volkswagen, we have moved from hardware providers to providers of mobility. This opens up huge possibilities for women graduates who are creative, rigorous and have a strong desire to succeed.”

Women at the Car Industry Helm

HEC 1976 graduate Jean-François Bacos used to preside the school’s Auto Club and its 1,000 subscribers. “To think, I graduated from HEC the first year it admitted women students. There has been something of a revolution, not only in terms of gender equality but also the opening of our horizons. We were very closed in on ourselves, these kind of partnerships help our school to open out, especially in the car construction business.”

For Thierry Lespiaucq, HEC’s educational approach will help industry fast-track young women talents towards the parity that is the ultimate aim. “At the moment,” he confides, “women are confined to jobs in the communications, human resources, marketing and design departments. In the future, we at VW are convinced they must be everywhere. Women in the car industry will be the driving force behind the changes we are witnessing at breakneck speed. Cars are becoming a luxury in our cities, and we are at the heart of the car-sharing alternatives. There is also a breakthrough in terms of the autonomous car. We feel the future women leaders that HEC is training will help us in all these sectors.”


Return to the news list
Find all news Corporate Connections