Since 2015, the Society & Organizations Institute (S&O) have been coordinating informal monthly meetings to discuss some of the latest research by its 60 academics, HEC doctoral students and visiting scholars. Recently, S&O invited practitioner guest Bradley C. Birkenfeld to share his remarkable story of whistleblowing against UBS, the world’s largest private bank. It was part of a series overseen by Associate Professor Luc Paugam on corporate fraud - from whistleblowers to activist short sellers like Daniel Yu. 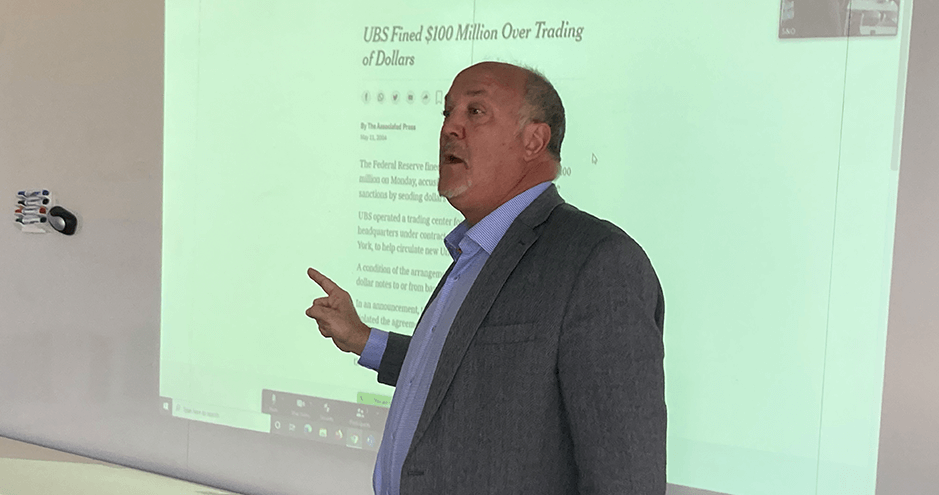 Bradley Birkenfeld’s visit to HEC Paris’ campus could not have been timelier. As the war in Ukraine raged, western governments sought to impose unprecedented economic sanctions on Russia and confiscate the fortunes of some of its richest citizens - often hidden in the West’s financial institutions. “The role of whistleblowers as central players in the enforcement (of sanctions) is taking on fresh urgency,” stated Politico.

“What you are about to hear is both important and shocking. It’s no longer a question of a guilty or not guilty party. It’s more about just when, and how much, will these banks be held accountable for, as a result of their complicity? And the unique insider information revealed by Bradley Birkenfeld is instrumental for this reflection.” This was no hyperbole from HEC researcher Luc Paugam as he introduced the author of “Lucifer’s Banker UNCENSORED”. For years, Paugam joined forces with fellow-academics Nicole Stolowy and Hervé Stolowy to track the whistleblowing world and corporate fraud, delving on their importance in corporate life. They, alongside the full house in T building, were exchanging with one of the most significant financial whistleblowers in history, the larger-than-life figure of Bradley Birkenfeld: a private banker whose actions shook the Swiss banking system to its foundation, destroy its secrecy policy; as well as revolutionize U.S. financial law and partly inspire the Panama Papers, a global media campaign scrutinizing offshore banking’s secret crimes.

Win-win for Everyone – “Except the Crooks”

For an hour, the U.S.-born businessman outlined his rollercoaster career which initially saw him plummet from a high-flying banker with Crédit Suisse, Barclays Bank and UBS; to the ignominy of 30 months in an American federal penitentiary, charged with fraud conspiracy – before bouncing back. “I tried for years to draw the authorities’ attention to the shell game of offshore companies and secret numbered accounts, to no avail. 12 documented letters sent to everyone concerned and all I got in return was deafening silence. The only response from the American Department of Justice was to put me behind bars on the conspiracy charge. Thankfully, I persisted and left prison absolved and $104 million richer.”

Thanks to Birkenfeld’s highly-documented denunciations, the U.S. Treasury simultaneously recovered $25 billion in fines, penalties and back taxes from UBS’ fraudulent financial institutions and clients. After his HEC presentation, he mused on the implications in 2022: “Chasing these companies down is a win-win situation for everyone except the crooks. At zero cost for the government, authorities recoup their money. But whistleblowers have to be considered as extensions of law enforcement. They need to be compensated for the crimes they expose because they run huge risks.”

The United States remains a leader in the compensation field, since whistleblowers are paid up to 30% of the total recovered by authorities. But the challenges remain and the award program designed by the IRS in 2006 is being hit by what one specialist called “economic starvation”, due to massive delays before whistleblowers receive their rewards. In introducing the new IRS Whistleblower bill in 2021, Senator Chuck Grassley stated: “The IRS whistleblower program has been a genuine success for American taxpayers. We ought to do whatever we can to ensure its continued success, so tax dodgers and fraudsters pay what they owe.”

Setting Up a European Whistleblowing Network

Even if it’s been 15 years since he denounced the UBS money laundering operations and retired from the banking profession, Birkenfeld maintains his commitment to cleaning up the financial sector. The 2018 French translation of “Lucifer’s Banker UNCENSORED” - subtitled “How I destroyed Swiss Banking Secret” - coincided with the high-profile UBS trial in Paris against tax evasion. This ended in 2019 with a record fine in France totaling €4.5 billion (this was reduced to €1.8 billion in 2021) for “aggravated money laundering” and promoting illegal banking services between 2004 and 2012. “There is so much to do here in Europe,” said Birkenfeld. “But recently things have been moving quicker than we thought. In the U.K., they’re pushing through the Economic Crime Act, designed to crack down on dirty money coming into the country. It should set up a reward scheme because we take huge risks to denounce these crimes.”

The 57-year-old intends to opening a whistleblowing office in Europe in the coming years and aims to create a network of law firms throughout Europe, partnering up with NGOs to “change laws on the continent”. Meanwhile, he nourishes his comprehensive website Lucifer’s Bank with the latest news on the front: “Europe needs to catch up with the times! Whistleblowers risk everything and are terribly isolated when denouncing tax frauds or illicit business practices. They are physically abused, run the risk of losing their jobs, marriage, financial stability. By joining forces, I hope we can protect these people who put their lives on the line. And, while we go after these companies – they have to feel some pain! – we will be seeking a middle ground: imposing fines, penalties, taxes, needs to be exponential, but also viable, allowing companies to turn round, too.”

Meanwhile, the European Commission said in March it will be designing a “whistleblowing tool” to help individuals report possible sanction violations against Russia. It is also proposing a new law to “strengthen whistleblower protection across the EU.”