Between June 9 and 11, HEC Paris hosted the 2020, 2021 and 2022 Commencement Ceremonies, an unprecedented event which united over 5,000 graduate students. Witnessing the graduations on the Jouy-en-Josas campus were 7,000 guests, professors and HEC staff. The historic triple ceremony thus brought together the HEC community with families and friends who travelled from the four corners of the planet to celebrate the consecration of years of study. 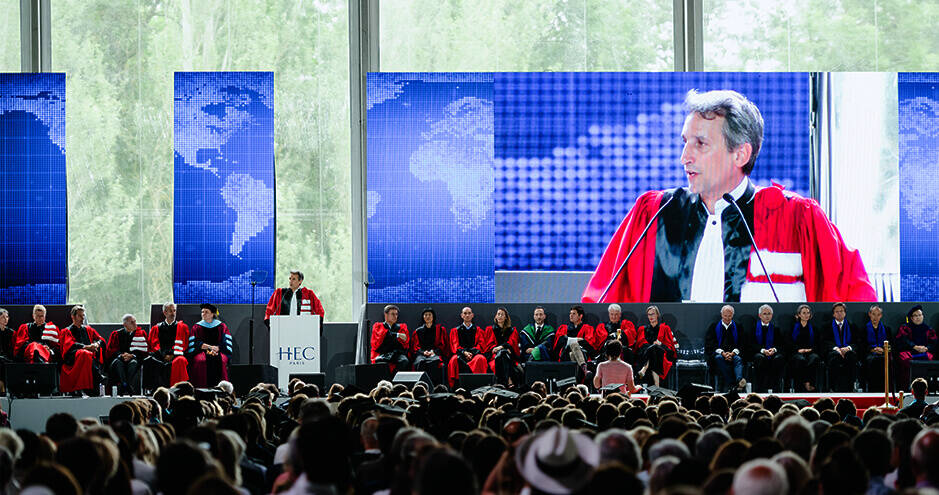 “We made you a promise at the begin of the year that, come June, we would come together in ceremonial caps and gowns, under this marquee, a sunny day, all united. The COVID pandemic, still active at the time, would not push back your ceremony. And this statement was met with a degree of skepticism.” HEC Dean Eloïc Peyrache, smiled and paused in front of the audience of almost 4,000 students, parents, professors and children. “Well, we’ve held our promise! And what a week it’s been!” A thunder of applause raised the roof of the marquee tent on this sunny Saturday, June 11; Peyrache’s words heralded the climax of three afternoons that saw the graduations of three cohorts, two of which had been postponed for the first time in the school’s 140-year history.

“We have been anticipating this for so long, but the reality has outstripped what we had imagined,” said Roya Khajeh, who had flown in from Doha, Qatar, with her family to celebrate her 2020 graduation from HEC’s Executive Master’s. The degree goes beyond the symbolic: Khajeh hopes that with the Customs & Open diploma - recently ranked the world’s number one by the Financial Times - she will become her country’s first-ever CEO in the banking sector.

Amongst the 1,738 alumni at this third Commencement Ceremony were a sizable proportion of MBA graduates from 2020, 2021 and this year. Nikhil Nangia (H20) said his digital expertise has been enhanced by his HEC focus on strategy: “I feel privileged to be back today, amongst loved ones,” he said. “Thank you, HEC MBA, for teaching me to push myself and that everything is possible.” In his speech, fellow-MBA graduate, Michael Venditto insisted on the diverse student teams at HEC and how they contributed to “the greatest performance potential”: “With the January 2020 intake as an example, 110 initial students came from 37 different nationalities and over a dozen different backgrounds each in role, field, and education. There was no majority, no typical profile. I have tried to quantify my colleagues in numbers, but they are best characterized in one word, courageous. Courageous in leaving their comfort zone to understand the different cultural, professional, and academic perspectives of one another. Courageous in sharing and accepting feedback and criticism. Courageous in being vulnerable and trusting in one another, creating a sense of psychological safety within our classes, and fulfilling the potential of our shared diversity.” 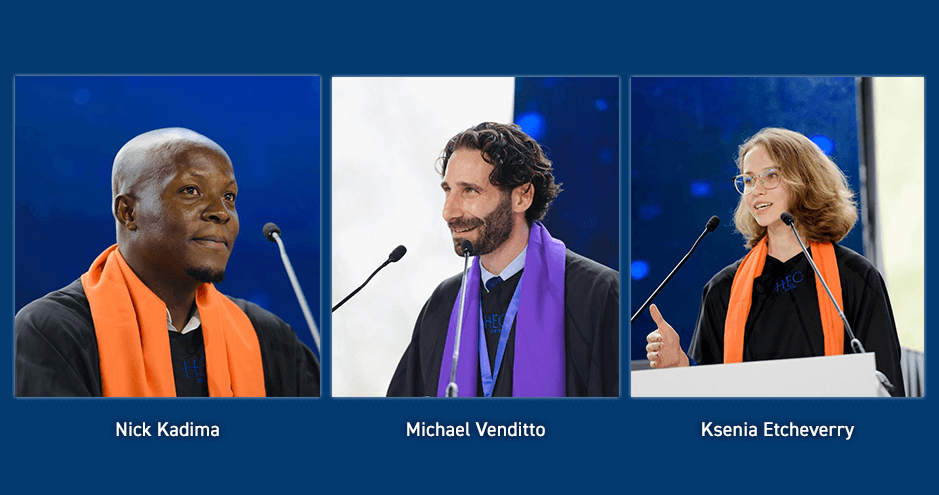 Meanwhile, Gabonese designer Patience Lekogo had flown in from Valencia, Spain, to witness the graduation from the Grande Ecole of her childhood friend Benjamin Sane. “Remember that name!” she exclaimed during the Commencement Ceremony for the 2022 graduates on June 10. “This is just the first step in a career that will mark West Africa and beyond.” Sane shyly waved her away with a broad smile.

The following day, EMBA graduate, Maryse Lokossou, sat patiently waiting to be formally ushered into the HEC alumni community thanks to her 18-month bilingual degree. “This has been an adventure which has allowed me to surpass myself,” said the Beninese. “The degree gave us much needed context, tools for impact and a belief in oneself. I’m returning to Benin with the conviction that we can do something for the continent. We have everything to build, with a youth that has no complex and can be part of the world elite.”

Lokossou has already enjoyed a remarkable career in banking and consulting and was at the Commencement ceremony with not one, but two caps: as an executive graduate and as the accompanying Chief of Staff to the keynote speaker on June 11, Serge Ekué, President of the West African Development Bank (BOAD in French). Ekué was making history himself as the first Commencement keynote speaker from the African continent. As an EMBA alumnus himself (2011), Ekué said he felt honored to stand before the 2,000 graduates of the day who, he had calculated, were going to invest 300,000 working hours “to fulfill (their) goals and make the right choices.” “So, don’t let those hours slip away! Time is your most valuable asset. And, sooner or later, Africa will cross your path. Be open to the opportunities it provides! You are great fighters, commit yourself to sustainable and inclusive development. But do it – with humility!” 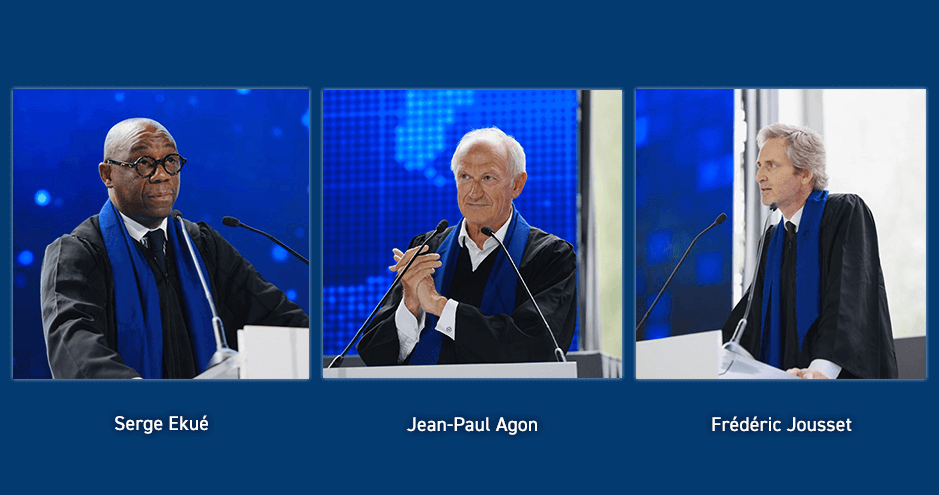 Ekué was one of three keynote speakers over the three days and all three brought their enlightened perspective to the alumni. At the June 9 ceremony, Frédéric Jousset (H92) insisted that “HEC will never leave you.” But, the founder of Art Explora added, “knowledge is not enough. When you enter the professional world, you must improve its rules, change them, find conviction and purpose.” The following day, the newly-elected President of the HEC Board of Directors, Jean-Paul Agon (H78), confided that his teachers had felt he was something of a “subversive element” in his high school days. Behind the retired L’Oréal CEO a picture of Agon as an 18-year-old was beamed onto the screen. “There was some truth to that. I was different, disruptive, a free spirit. But those qualities were a precious help to my life and career. I hope you have some (of them) because they stimulate the world to move forward, they challenge the status quo. They helped me to reinvent L’Oréal 15 years ago and convince colleagues that there are non-financial priorities we must put forward first.” 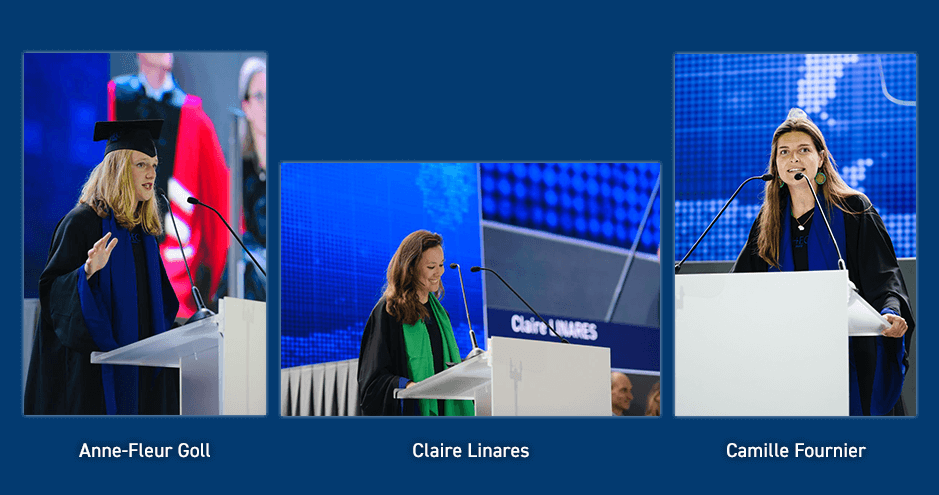 Representative graduates from several degrees were also loquacious in their speeches in front of their fellow-alumni. Anne-Fleur Goll (H20), in a highly appreciated and shared speech, called on all graduates to question the role they can play in making the economic and social system evolve towards more sustainability: "In these decades of professional life, we have the opportunity to make history, to stop perpetuating a financial and commercial system that goes way beyond planetary boundaries, to stop this spiral that will affect humanity for centuries to come." The next day, Camille Fournier (H21) equated her step into the professional world to a journey on a sailboat and she invited the audience to join her. “My boat is named sustainable and human agriculture. Destination: our professional lives. The weather is uncertain and the sea is stormy… As far as I’m concerned, I stay on board…” And on Friday, PhD graduate Claire Linares admonished fellow alumni to be themselves: “Stay connected to who you are, what you aspire to, listen to the weak signals. Explore different routes, don’t be afraid to make detours, to get lost, to turn back. Dare to change course to take you own way.” Other graduate students - Bianca Giannacarri (H20), Maximilian Hillenbrand (H20), Maximilian David (H22), Ksenia Etcheverry (EMS), Michael Venditto (MBA), and Nick Kadima (MSIE) - wowed the audience by sharing their most memorable and intense experiences, all of which emphasize the importance of the HEC community, the social bond that unites all of its members, the transformative experience of their years on campus.

After each ceremony, graduates, academics and guests thronged and exchanged happily around a global buffet behind the marquee. A degree of nostalgia descended on the gathering. Several alumni had already tasted the bitter-sweet realities of the professional world and were delighted to reminisce with their cohorts on golden days on the Jouy campus. “It’s so important to mark our passage like this,” said Valentine Renaud, graduate of the Media, Arts & Creation Master (M.A.C.). “I was fortunate to be at the heart of the French pavilion at Expo 2020 Dubai last year, but it’s been wonderful to catch up with my fellow-graduates this past week.” Another M.A.C. alumnus, Jeanne Deny, was taking a break from the searing pressure of supporting Palestinian theater in Jerusalem as an international V.I.E. volunteer. Whilst PhD graduate Emilien Macault mused over ways of collaborating with other academics to further his research on fake news in more impactful dimensions. “Coming here and listening to these speeches drives home my desire to move the cursor, step out of my comfort zones and become a more universal actor.” To which, another PhD alumnus, Olga Ivanova summed up the general feeling when looking back at her degree: “PhD is a journey not because it is long, but because it transforms us into more thoughtful and more patient humans.”