For the fifth consecutive year, the French consulting firm AXESSIO joined forces with HEC Paris to organize the Blue Ocean Awards (BOA), a competition devoted to establishing new markets that redefine the standards of the Red Ocean markets and showcase firms with a societal focus. In a competition that started in May 2018, 400 young companies vied for the coveted final round. 19 finalists were then convened to France’s Ministry of Finance at Bercy for a November 6 showdown. 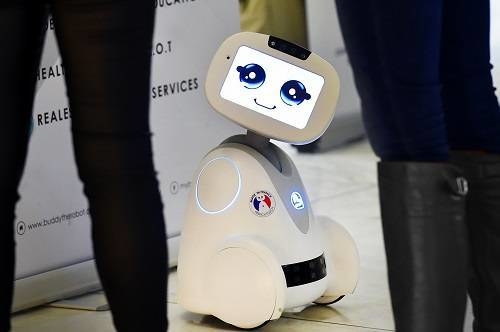 Wave Bumper, Pipplet, Traq’food, Bird Office … just some of the young companies at the Blue Ocean Awards, BOA, who dream of becoming household names in tomorrow’s France. They were among the startup finalists exhibiting their goods or technological know-how in the bowels of a Bercy Ministry where around 140,000 civil servants work.

In the course of an entire day, over 500 visitors to the BOA enjoyed interacting with the likes of Bob, a startup which has created what it calls the world’s fastest and most compact dishwasher; they saw what is customized perfumes proposed by Sillages Paris; or they were consoled by a robot called Buddy, the first social robot “with a heart” put together by Blue Frog Robotics. “These 2018 Awards are multi-sectorial, as you can see,” explains Alban Eral, AXESSIO’s Director of Innovation Strategies and the man at the heart of this annual initiative. “Yet, while BOA continues to attract a diversified crowd, there is one common thread running through all these entrepreneurs: at their core, these companies have a societal impact and purpose. And this societal factor has gathered pace over the years.”

Since 2014, the Blue Ocean Awards have showcased some of France’s most innovative and market-creative startups in a drive to create new markets for small and medium-sized French enterprises. Backed by the Minister for Economy and Finance, Bruno Le Maire, it has provided key boosts to companies like Compte-Nickel and Alertgasoil which have established themselves in the fields of banking and fuel cost management, respectively. Both were rewarded by the inaugural BOA four years ago and were again honored in 2018 with a newly-created Legends Award. This rewards groundbreaking achievements inspired by the Blue Ocean Strategy.

But what exactly are these Blue Ocean Awards? From the start, the initiative was inspired by W. Chan Kim and Renée Mauborgne. The INSEAD academics co-wrote the 2004 bestseller “Blue Ocean Strategy” outlining ways to access untapped market spaces and create new demands. “Blue Ocean companies are not interested in cut-throat competition that dominate Red Ocean firms,”  Eral insists. “They are keen on finding uncontested market space. Their focus is on the customer, not the competitor, and they look at the entire supply chain to solve problems.”

This is illustrated with Compte-Nickel, the “Nickel Account” which makes banking accessible to everyone, including those with no income or asset requirements. Alban Eral: “Before it started, the traditional banking system was standardized, stuck in a rut over online banking or providing services to people in this category. Compte-Nickel arrived with a simple offer, saying to future customers: ‘Just go to your local tobacconist and, in five minutes, you can open an account, no strings attached!’ And the success has been phenomenal – 33,000 accounts are opened every month, they now have over a million customers! And it’s a great response to the 10th UN Sustainable Development Goal .” 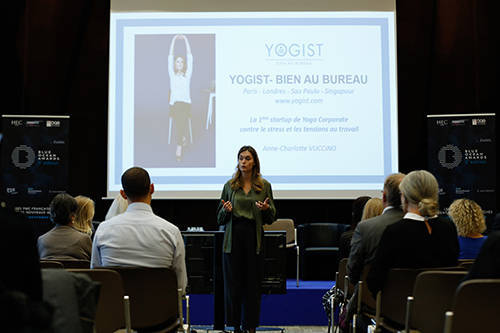 Since Compte-Nickel’s BOA in 2015, the candidates for the awards have grown in maturity and professionalization, according to the organizers. Jo-Michel Dahan is a Deputy Director at the Ministry’s Directorate-General for Enterprise and has been backing the initiative from day One. “Each year, we’ve seen outstanding small and medium-sized companies emerge, just a testimony to the creativity of French entrepreneurs,” Dahan confides.” From the start of the 2018 competition, we’ve noticed how this latest generation has professionalized its commercial and economic techniques, notably in terms of business models and pitch presentations.” Alban Eral concurs: “It’s pleasing to see how candidate firms are simplifying their offer, focusing on what is at stake and seeking an impact which will draw in a new clientele. I’m convinced that society’s transformation towards a more “durable” version can only come from entrepreneurial spirits inspired by the Lumière philosophers that helped end obscurantism.”

This enlightenment was arguably best incarnated at the 2018 BOA by Yogist, Anne-Charlotte Vuccino’s “corporate yoga” initiative which won the Societal Award on November 6. The HEC Alumni has created a new method to combat stress at work which has taken off well beyond the French borders. “I’m delighted to be here to spread the message that yoga can propose a simple solution towards employee well-being,” she says shortly before accepting the award. “It proves that you can create a market and have a positive impact while still generating financial value.” Vuccino’s techniques are now shared in a popular book which should soon see an English version on the market. 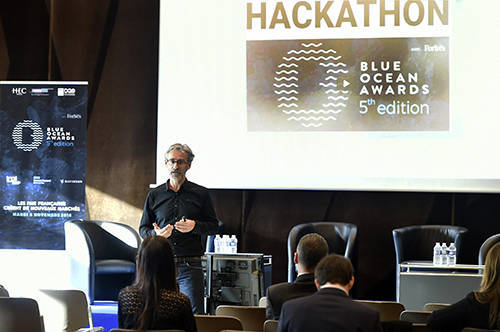 Her energy and drive are qualities shared by HEC executive director Nicolas Lemoine. Earlier in the day, he shared his experiences as a director for AT&T in a largely-followed keynote speech focusing on the essential strategic role played by a company’s committee for strategy. Equally engaged in the Awards from its very inception is Stephane Madoeuf, Director of HEC’s Major in Digital Business. This year, he oversaw a Hackathon which saw two student projects attributed the top prize: Cryptio to manage the accounting of crypto-currencies and Top-Models.fr for uploading algorithms. 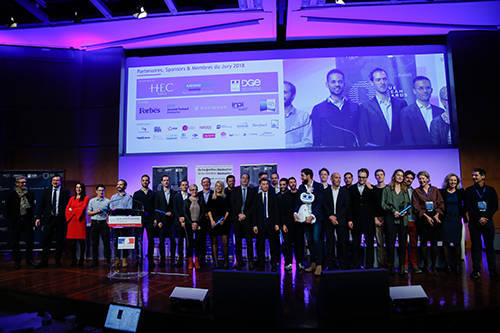 Overall, it was easy to see the commitment of the BOA laureates this year to improving societal impact. At the gala evening which closed the day. Representatives from Bob, Blue Frog Robotics, Sillages Paris, Tilkee and Meetinclass were lauded by the jury for their originality and societal impact. They are hoping to emulate their predecessors, 91% of whom have found the necessary funding for a successful launch within six months of winning the coveted prize.