HEC Paris and its HEC Foundation partners launched their most ambitious fundraising campaign to date on June 20, designed to propel HEC into the world’s Top 10 business schools. Over 300 supporters came to the launch held at the Ministry of Foreign Affairs, Paris, a venue chosen to symbolize HEC’s growing international dimension and impact. They pledged to back the school’s drive to raise €200 million by 2024. 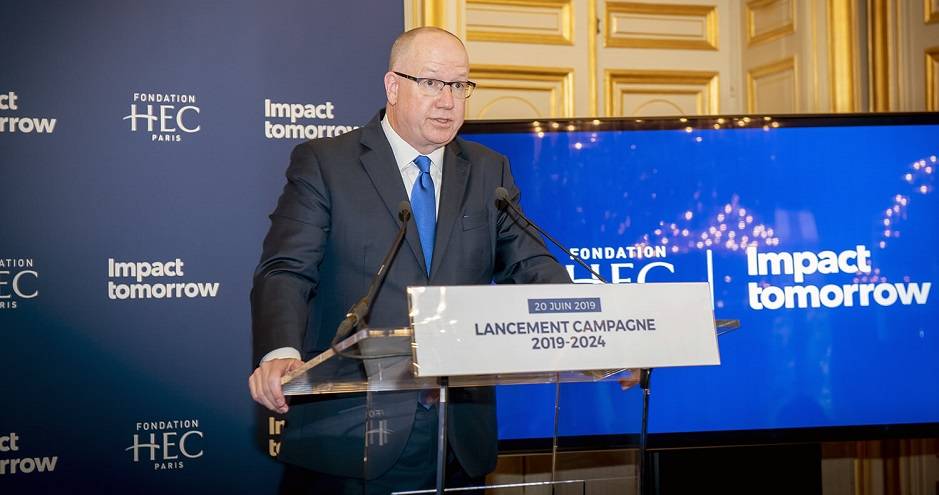 “This is a historic day for HEC and we are proud to see you all so mobilized in support of a campaign which will help our school to adapt to the challenges of the 21st century!” With rousing words, HEC Dean Peter Todd greeted a full-house of alumni, business partners and staff members gathered in central Paris for the launch of “Impact Tomorrow”. This five-year fundraising campaign is designed to accelerate the transformations undergone by one of Europe’s top business schools.

“We aim to build on our previous campaign which raised over €110 million between 2008-2013 by tapping more into our international networks,” said Delphine Colson (H.94), Executive Director of the HEC Foundation. “There is growing support from around the world, as testified by the number of pledges we have already received in our pre-launch drive.” Indeed, almost 20% of the 8,000 donors who have pledged €70 million so far (in what is known as the “silent phase”) are international graduates from the school.

A Business School of Exception

It was a full turnout by the HEC and Foundation leadership who mapped out key elements behind the five-year campaign. These include strengthening the quality and depth of the school’s student:professor ratio, currently at 30:1. “We will seek to align ourselves with the top European and global business school, which oscillate between 10 and 15:1,” said Peter Todd. “11 professors are being recruited for September already.” HEC Foundation President Olivier Sevillia (MBA 90) specified that 15 additional Chairs are to be created to reinforce the reputation of cutting-edge research HEC has acquired in the past decade. This will also be articulated by the pioneering research led by the Purposeful Leadership course which begins end-August with a series of seminars for all students entering the Grande Ecole. “HEC must serve as a magnet for professors devoted to changing the world through their research,” said the Dean of Programs Eloïc Peyrache. To this end, noted HEC Alumni President Frederic Jousset (H.92), HEC needed to remain “a business school of exception” and called on his fellow-alumni to rally round the fundraising campaign.

The Dean also informed attending journalists of the reinforcement of student services, including new sports facilities and social centers destined to build on “a strong sense of community.” At its heart will be an Agora, described “the very heartbeat of the campus.”

The “Impact Tomorrow” launch was also attended by some of HEC’s most successful alumni. The vivacious Director General of Mac Cosmetics, Sabrina Herlory-Rouget (H.02), whipped up the audience with her call to rally behind “our school, our diploma, our very identity.” Whilst the co-founder of the Big Mamma restaurant chain, Victor Lugger (H.08), urged fellow-graduates to “show their gratitude” to their former school by investing in a campaign which he qualified as “urgent.” “This is no time to sit back,” he emphasized to loud applause. “HEC is facing a serious financial challenge as public subsidies are programmed to be withdrawn in the coming years. Show your support for a school that will become an effective and pertinent global force. HEC must become the leader of movement to rebuild European capitalism.” The speakers all underlined the school’s commitment to a school devoted to academic excellence regardless of its students’ social, geographical or cultural origins. HEC’s Equal Opportunity Delegate Helene Bermond underlined the rapid development of its programs to have social diversity at the heart of its recruitment drives: “The number of students receiving a scholarship on social criteria within the Grande École program has increased from 5% to 18% in the last ten years. We are aiming to increase this figure to 25% by 2024, making HEC the most committed European business school in terms of social and international openness. This will create an inclusive campus that benefits all students.”

Peter Todd and Olivier Sevillia stressed the school’s engagement to building a campus for the 21st century. The funds will help accelerate the modernization of the campus with a great number and variety and services offered to the resident student population. The Dean of Programs Eloïc Peyrache said the 110 nationalities represented at Jouy-en-Josas are an example of peaceful cohabitation which could be an inspiration for the generations to come. “What we are building is a dynamic experiment designed for academic excellence, with contributions from around the world,” he told reporters. “To establish itself as a school of innovation, HEC Paris puts a multidisciplinary approach and the complementarity of profiles at the very heart of its project.” Eloïc Peyrache detailed the major axes his academic staff will be reinforcing around entrepreneurship, digital transformation and social responsibility.