Kevin Ashley is an internationally recognized specialist on computer modeling of legal reasoning. The Professor of Law at the University of Pittsburgh has published dozens of articles on this emerging discipline. At the Legal Data Mining Conference co-organized by HEC, he delivered a keynote speech on the new tools for law practice in the digital age. 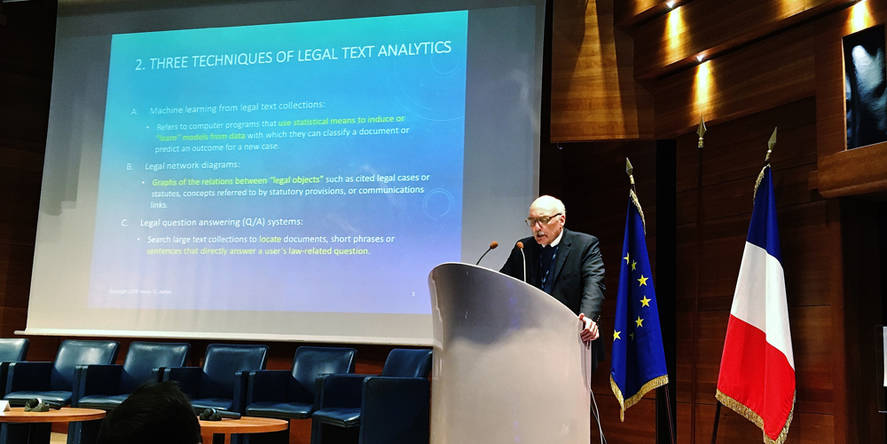 Q: You have published dozens of articles and books in the field of legal reasoning and computer modeling, including the 2017 book, Artificial Intelligence and Legal Analytics: New Tools for Law Practice in the Digital Age. Yet, you opened your keynote speech by warning that there are a growing number of “hysterical” claims in the US alleging that lawyers will soon be a thing of the past as AI becomes more prominent in the legal field. Just how seriously should these claims be taken?

KA: Various publications for legal communities and their legal editions thrive on eye-opening headlines claiming lawyers are a thing of the past, over and over again. However, there is starting to be a reaction to this hysteria and cooler heads will ultimately prevail. It’s a strong force in the sense of publicity but not in terms of real pressure. However, it has caused law faculties to think a lot harder about whether we’re preparing law students for the way law will be practiced in the future. Various schools are experimenting with new courses which will enable students to understand the technology being pressed upon them by companies. And that’s an important skill to acquire.

Q: As a widely-traveled academic for these past 30 years, how do you compare the teaching of legal data mining on both sides of the Atlantic?

KA: Interestingly, most of my students at the University of Pittsburgh are Europeans. Naturally, some of them want to return to Europe after their PhDs and have the hardest time finding a post there. Universities in Europe seem extremely narrow and divided. I don’t fully understand the distinctions made between private and public law and this hampers a university supporting this kind of inter-disciplinary research.  You can’t have talented students moving from post-doc to post-doc to post-doc like it seems to be happening here. That’s the first thing I’d change.

In the Pittsburgh, despite having a typically conservative law faculty, they know about AI because so much AI research is being done in schools like the University of Pittsburgh and Carnegie Mellon. They are open-minded and the university has ways to support interdisciplinary connections. In the last year I’ve seen more and more job opportunities relating to legal data science at major law schools in the US so there is finally a place to imagine our graduates finding faculty positions.

Q: Are there any other differences?

KA: In some ways you would think Europe is a more fertile area for legal data mining because the EU is constructed in such a way that principles come down from high and then have to be implemented in various national regimes. There’s also the language and culture differences to consider. There’s a structure and an ordering of things which researchers can take advantage of in building computational models that are more general in application. To some extent, the EU and Europe supports them through the Erasmus Mundus programs. As a result, there’s a lot to build on here.

Q: You could argue that the roots of legal data mining go back to the landmark paper on Artificial Intelligence and legal reasoning, published by Buchanan and Headrick in 1970. How much of a foothold has it established in the intervening 49 years?

KA: That paper made very useful recommendations for people wanting to study AI and law activity. It recommended interviewing practitioners and monitoring their activities as they solved legal problems. This kind of empirical bottom-up approach was never supported because it’s too expensive to do that research and firms are unsympathetic. They are not known for providing funding support, and there were also privacy issues. In the last eight years, however, new techniques for analyzing texts have been developed in question answering and predictive coding for e-discovery. Researchers can apply these tools to extract some meanings from legal texts such as case decisions, contracts, and statutes. New legal apps can apply the extracted semantics, along with citation networks and other techniques, to improve legal information retrieval and problem solving. So, we are finally pursuing an empirical, bottom-up approach after all.

Q: After your keynote speech at today’s Legal Data Mining conference, HEC Professor and co-organizer David Restrepo thanked you for the clarity and depth of your analysis in what he called a “cluttered and confused field”. How appropriate a description is this of the area of research you are devoted to?

KA: It’s an accurate one. It’s fostered by extraordinary claims from the commercial side promoting its products. Professionally, I go back a long way in AI and have experienced waves of expectations and ultimate failure to deliver on these expectations. But we’ve found ways to survive these situations.

Q: What are the opportunities that legal mining offers in fields like common law, in which you specialize?

KA: It has already shown great promise in the field of automated contract analysis and its application in the context of due diligence. This is one of the most fertile areas for research because they’ve got the data, and we see what the systems can do and focus on the fringe. For example, can we get a system to draw an inference based not on just one provision in the contract, but based on multiple provisions in the contract or even based on provisions across multiple contracts?

Then, there’s the area of legal information retrieval and improving on it. From a pedagogical point of view, I’m very intrigued by whether law students annotating cases can actually learn what we want them to learn about how to read a case more efficiently than we’re currently teaching it. In law school, you don’t provide explicit procedures in lists and have students work through things. We put them through a practice activity but don’t try to have them express what they’re doing. Annotating cases could change that, and this is a fertile area for research too.

What is the impact of #AI on the justice system? Keynote lecture by Prof Kevin Ashley from University of Pittsburgh @PittTweet on the use of #MachineLearning and other tools for law practice in the digital age. Chaired by #HECprof @davidamariles. #legaldatamining #smartlaw pic.twitter.com/FO0eBXf1TF

Q: David Restrepo praised you as incarnating the inter-disciplinary nature of AI and the legal body. But what other disciplines would you like to see commit themselves to legal data mining?

KA: One field which really needs to be part of this research is design. Stanford University has a design school which focuses on the interfaces between humans and systems that are tailored to the needs of the legally untutored. One thing we’ve seen change over the years in my field is the public’s ability to handle a computer system. They’ve played with their iPhones, Internet, and so on. So, there are rules, expectations and customs they are familiar with that a designer can take advantage of. Graduate students in Computer Science like mine are not going to get a PhD for designing especially useful interfaces; they will acquire PhD’s for contributions to the modelling of legal reasoning or cognitive science. But if you have a design school, they can get a PhD for clever interface design, so you have a talented labor source. The trick is to encourage them to work together.