16 years after its first edition, the Women’s Forum Global Meeting returned to the Carrousel du Louvre, central Paris, to explore ways of combatting increased poverty, gender marginalization and self-empowerment. For the fourth consecutive time, HEC Paris sent a strong delegation led by new generation of students. In the words of the Forum’s new Managing Director, Audrey Tcherkoff, “the youth are challenging us in all departments, they hold the keys to engaging in all social and economic issues.” 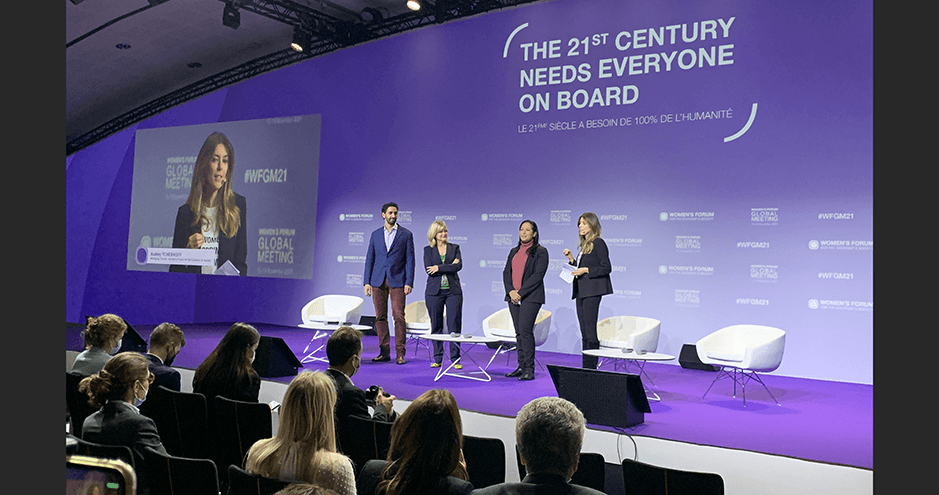 “This is the first time ever we have engaged youth on such a massive scale and the results are here to see,” confided Audrey Tcherkoff to the HEC Paris cameras covering the event. Indeed. At all levels of the cavernous venue under the Louvre, enthusiastic groups of young women and men followed and debated with many of the 93 speakers in the 22 plenary sessions organized by the Women’s Forum for this four-day program. It had been almost two years since the previous in-person Forum was held in the Carrousel. Last year’s virtual event had kept the flame alive, but it could never replace the vital exchanges in the sidelines. This Friday, November 19, was the climax of an event which mixed virtual and in-person sessions debating burning topics in front of delegates from over 100 nations. Friday was the only day where spectators could share opinions and ideas in person in a global event that reoriented its priorities to answer the dramatic consequences of the COVID-19 pandemic on gender equality.

“These two years of crisis have set back the fight by 36 years,” stated the organizers right from the outset. HEC Associate Professor in gender diversity and entrepreneurial leadership, Shaheena Janjuha-Jivraj, contextualized the statement for us: “There is a much greater focus here on understanding the level of inequalities. When we talk about what's being pushed back, well, the inequalities were always there, but they have been exacerbated because of the lockdown, because of the impact of the pandemic and because they are so much more exposed, there's very little option now. This pulling back of 36 years is not going to be accepted” The new HEC academic based in Qatar underlined the evolution she felt was strongly expressed in the Forum: “As someone said here today: ‘We have to stop inaction by being in action’.” 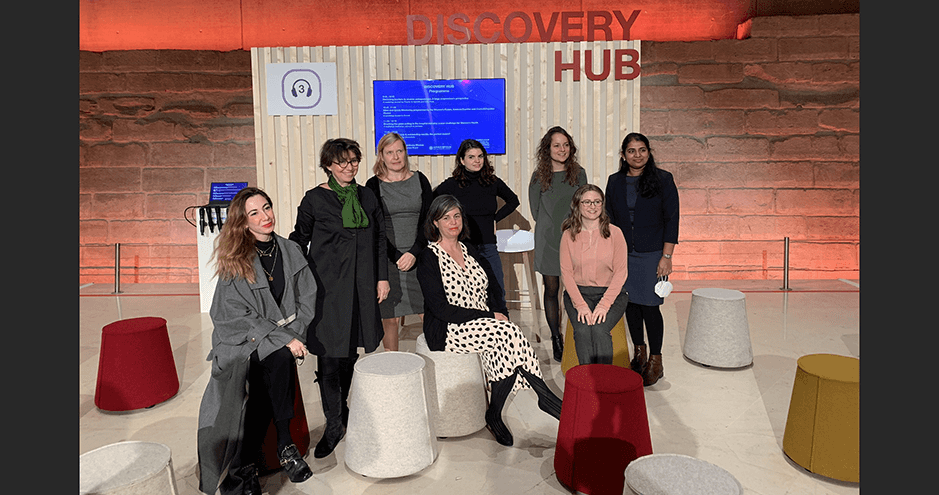 Janjuha-Jivraj was one of the business school’s five speakers, accompanied by two student representatives for the Youth Engagement Initiative. HEC Master in Management students Carla Richard and Gladys Lipondi were reinforced in their convictions that women continue to face daunting glass ceilings in the business world. The former is President of HEC Débats and she spoke out against these inequities: “Today, I was struck by figures released at the Women’s Tech session,” said Richard. “Women benefit from only 2% of the investment funds available. That has to change because we have the same capabilities.” Lipondi, who is also President of HEC Women in Business, concurred: “Women remain under-represented in most working sectors, be it finance or services. The key to overcoming this is economic empowerment. Access to capital opens doors and leads to more women in leadership roles. For the moment, this is not the case, even when, on average, women are more educated than their male counterparts.”

The two HEC student leaders were amongst the 10,000 youth participants who were both virtually and physically present for this 16th edition. Several turned up for the first anniversary celebration of the #WomenEntrepreneurs4Good program which has been backed by HEC and P&G. During the plenary session, eight of the top startups involved in the program were welcomed on stage by Audrey Tcherkoff. Joining them, Senior Executive Director for the HEC Innovation & Entrepreneurship Center, Inge Kerkloh-Devif and HEC Program Director of Startup Sprint, Matthias Abramovicz, spoke of the importance of this initiation. “This is at the intersection of entrepreneurship, gender equality and climate,” said the former. “These values have become the cornerstone of HEC policy ever since our new Dean took office. We want to take our core values of Think, Teach, Act further, beyond (France’s) borders. Furthermore, we are committed to opening up the HEC ecosystem, with its professors, students and alumni, to support women entrepreneurs.”

Abramovicz noted continuing disparities between the support given to female and male business founders. “This is especially the case in finance,” he said. “We must close the gender gap. We are going to increase our commitment to programs and provide more support to women founders of companies tackling sustainable issues.”

As new Managing Director of the @Womens_Forum, @AudreyTcherkoff believes that the potential for action resides at the intersection of youth and experienced viewpoint. And so do our @HECParisMasters students and 'Youth Delegates' at the #WFGM21 pic.twitter.com/pdOVS0SjyN

LaTosha Brown: “Students are a Goldmine for the Future”

As the Forum closed, Audrey Tcherkoff lavished praise on the entrepreneurial initiative: “This is one of my favorite accelerator programs. Together, we are mentoring young women entrepreneurs who are launching companies with positive impact on the planet. They will be the ones who will lead what we are calling a ‘she-covery’, taking us out of the COVID-induced crisis.”

The final word went to LaTosha Brown, co-founder of Black Votes Matter. Earlier, the African American activist had wowed the plenary audience with her unique brand of a cappella Blues, militancy and legal knowhow. After a long exchange with admirative French pupils, she turned to what academic institutions like HEC Paris could do to address the inequalities the Forum had attempted to address: “I see three things business schools need to address,” she confided to us. “First, there needs to be more representation of women in administrative positions, right up to top level. They are the ones able to lead and shape agendas and coursework. Second, more curricula and courses need to merge academy and practitioners. This will mold students who will be our gold mine! They will be a kind a brain trust. Finally, they need to look at racial and social justice as a vital technical tool for human advancement. This tool should be treated as a resource, fueling our future and creating people power. This will bring about an institution that will cultivate and support the development of talent.”

“We have to shift the frame,” she concluded. “Racial justice is not something nice to do. It is our greatest resource to build a more sustainable, more fair, more peaceful world.”